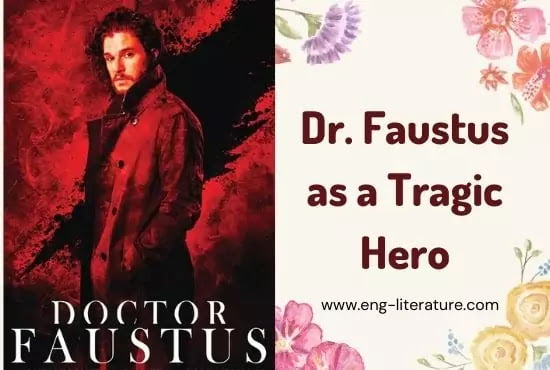 Doctor Faustus as a Tragic Hero

Christopher Marlowe’s dynamic character Doctor Faustus is one of the best examples of tragic heroes. According to Aristotle, tragic hero should be a person of great reputation and prosperity, he must have some tragic flaw in his character which brings his downfall, he should suffer from conflict and most importantly, his downfall should evoke pity and fear among the audience. If we go through Aristotle’s theory, we will find that Doctor Faustus has accorded almost all the criteria required to be a tragic hero.

According to Aristotle, tragic hero should be a person of great reputation and prosperity. But in Marlowe’s conception of tragic hero, his tragic characters are not of high rank. We find that Faustus is of an ordinary family who goes to Wittenberg for higher studies, mainly supported by his kinsmen. He mastered all the branches of learning available in his time. He was honoured and respected by his friends, scholars, kings and queens. In this regard, he deserves the honour to be the king of all tragic heroes.

According to Aristotle, tragic hero must have tragic flaw in his character which brings his ultimate downfall. We find that Faustus has a serious flaw in his character. He is puffed up with pride and intemperate ambition to acquire knowledge and through it to gain superhuman powers. Due to his pride and ambition he is disappointed with all the branches of learning that he has mastered so far. Physics, Divinity, Law, Philosophy – all are absolutely inadequate for his purpose. He took a dangerous step to run his aspiration – to gain superhuman power. He decides to sell his soul to Lucifer to exercise the black art of necromancy for a voluptuous life of 24 years. Hence, he discards God and defiles all religious and moral principles. We find him declare:

“Philosophy is odious and obscure,

Both law and physic are for petty wits;

Divinity is basest of the three,

Conflict is another side of tragic hero. We find that Faustus experiences inner conflict. His choice of necromancy is made after inner conflict. The appearance of the Good Angel and the Evil Angel is the personifications of his inner impulses. His conventional heart is opposed to his self-damnation and this is clearly hinted when his blood congeals as he proceeds to sign the contract with his blood. But he ignores the warning and completes the scroll. As time rolls on, he becomes more and more disillusioned and the growing sense of loss and of the wages of damnation begins to sting him.

According to Aristotle, the suffering of tragic hero should evoke pity and fear among the audience. We find that Faustus‘ downfall evokes pity and fear. As a part of audience, we feel some form of connection with him. He makes several mistakes which any man can do. He wants to gain more knowledge which is very common practice in human nature. We sympathize with him as his feelings are similar to other human beings. We sympathize with him at the end of the drama when it is time for a farewell to his soul and he appeals to God for mercy:

If thou will not have mercy on my soul,

Yet for Christ’s sake, whose blood hath ransom’d me,

Impose some end to my incessant pain.”

Considering the major criteria of tragic hero as suggested by Aristotle, Doctor Faustus can be treated as one of the great tragic heroes. Though he is not hailed from a royal family, he reaches the highest position of honour through his learning. He suffers from inner conflict; has a tragic flaw in his character and the flaw brings his ultimate downfall. Finally, his downfall evokes pity and fear among the audience. Therefore, Doctor Faustus is a great tragic hero.