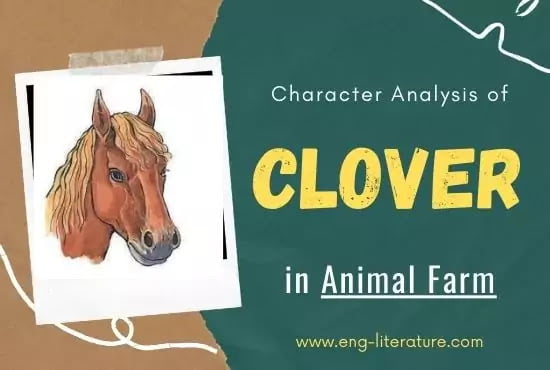 Clover, “a stout motherly mare…….. who had never got her figure back after her fourth foal” is hard working patient beast like Boxer. She becomes an ardent advocate of animalism so far as she understands its principles. Yet she is more intelligent than Boxer, mastering the whole alphabet, though she cannot put words together.

The first time we see Clover coming to attend the midnight meeting at the barn, she is walking very slowly and pulling her big hoofs very carefully so that no animal may get unwarily hurt, when the ducklings come in, they search for a place where they shall be safe. The other animals may accidently trend on them. Clover makes something like a wall with her forelegs. The ducklings settle comfortable within this wall and go to sleep. The cat also squeezes herself between Boxer and Clover.

Clover is as patriotic as Boxer and will never shirk the work. In fact, she chides Mollie for flirting with Pilkington’s men. And it is she who discovers Mollie’s stall lumps of sugar and bunches of ribbons which Mollie has accepted from neighboring humans. But there is nothing she can do to stop Mollie from deserting the farm.

Clover warns Boxer not to overstrain himself. Boxer is grateful for this affectionate advice but stands firm on his twin slogans- ‘I will work harder’, and ‘Napoleon is always right‘. To Clover, however, Napoleon is not always right. When it is announced that a Willingdon solicitor has been appointed to act as the agent of the farm to trade with the outside humans, she asks Squealer whether trade has not been prohibited and money declared a taboo. Squealer cleverly reports that there is nothing in writing about such a convention.

Again, when the pigs move into the farmhouse and start eating in the kitchen and lying on beds, she remembers there are definite rules against an animal sleeping on a bed. She gets Muriel to read out to her the fourth commandment. She is surprised when Muriel reads- ‘No animal shall sleep in a bed with sheets.’ She never remembers to have heard of the last two words, but then, she goes not have sufficient courage to say that those words were never there.

Even when the winter proves bitter and conditions in the farm are worse Clover never loses heart. But the purge upsets her. She plays a major role the scene after the confessions and mass executions. The animals creep away from the carnage and huddle around Clover for motherly protection. Through her eyes the reader views the farm from the knoll where they are lying and there follows one of the most effective descriptive passages in the whole book:

“Most of Animal Farm was within their view the long pasture stretching down to the main road, the hayfield, the spinnci, the drinking pool, the ploughed fields where the youning, wheat was thick and green and the red roofs of the farm buildings with the smoke curling from the chimneys. It was a clear spring evening. The grass and the bursting hedges were gilded by the level rays of the sun.”

As Clover, views the scene with other animals, Clover’s eyes fill with tears, and she thinks how disillusioned she is with the progress of the rebellion. Nevertheless she typifies the reaction of the great majority of the animals to the unexpected turn of events, there is no thought of disobedience in her mind, and whatever the future holds, she sees little alternative to carrying out Napoleon’s orders and accepting his leadership without question.

In the Battle of the Windmill, Clover fights side by side with Boxer, and with no less fiercely than he. When Boxer’s hoof splits, it is Clover who treats it with a herbal poultice. The remedy works, though slowly, and Clover feels relieved. however, the relief was only short-lived for Clover. One evening Boxer falls between the shafts. Clover, bending down by his side of her knees, notices blood trickling down from out of a corner of his mouth. With a voice husky with sorrow, she asks him how he felt, to which he replies there was nothing serious beyond a temporary weakness. She sends a messenger to inform Squealer and remains by his side. Squealer arrives and says that Napoleon was feeling concerned about Boxer and had already arranged for his being treated by a veterinary surgeon of Willingdon.

Clover and Benjamin make a straw bed in his stall to make him comfortable. Two day later, a van arrives to take Boxer to Willingdon. Benjamin reads the name of a butcher painted on the side of the van. Clover gets alarmed and runs after the van which is speeding away with Boxer inside it. She asks Boxer to jump out of the van, but he is too weak to attempt a jump. Clover loses Boxer forever.

With the passage of time Clover becomes a stout old marc, a highly respected grandmother to young animals who learn from her all about the Rebellion and the principles of animalism. In the closing chapter gout has made her joints stiff, and with her rheuming eyes she is the first to witness the pigs walking on their hind legs. She also notices the all-embracing new commandment and observes the confused and interchanging faces of men and pigs.

Clover, then, is more an observer than a participant, and it is not surprising that in the radio dramatization of the story she has been used as the narrator of the events.