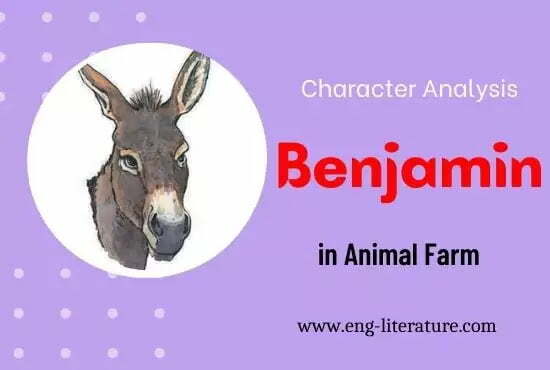 Benjamin, the donkey, is the oldest animal on the farm. He is he tempered and cynical, and his demeanor is quite unchanged by Rebellion. He goes about his work in the same slow, obstinate way and passes cryptic, cynical remarks. A favourite remark of his is that the only use of his tail is to keep the flies away, but he would have, if he could dispense with his tail and flies both.

No one has seen Benjamin laugh, his argument being that there is precious little in life to laugh at. When any animal asks him if he is not happier after the Revolution, his invariable and cryptic reply is that donkeys live a long time; none of them has seen a dead donkey. What he seems to mean is that one should not be led away by superficial changes.

He can read like the pigs, but refuses to do so since there was nothing worth reading. He does his duty in the Battle of the Cowshed, but refuses to side with either faction in the windmill dispute, since windmill is no windmill. According to Benjamin, “life would go on as it had always gone on; that is, badly.” This aloofness of attitude he maintained even after the executions of the animals.

Benjamin is finally moved to action over the treatment meted out to Boxer. Without openly admitting it, the old donkey is devoted to the great cart-horse. He warns him to take care of his failing health; he keeps the flies off him when he is taken ill; and bursts out in a great cry of indignation against the credulous animals when the knackers’ van arrives. Except for this single outburst, however, old Benjamin never becomes excited about anything. He watches the pigs with a knowing air, becomes morose and taciturn even ever after Boxer’s death and reads to Clover the new single commandment without comment.

Benjamin, the arch cynic, is thus the only animal on the farm who is not carried away by the fervor of the Revolution and is not duped by the hypocrisy of the new regime. In him may be symbolized the more intelligent of the middle class society.

“He would say that God had given him a tail to keep the flies off, but that he would sooner have had no tail and no flies.”

“Windmill or no windmill, life would go on as it had always gone on – that is, badly.”

“Donkeys live a long time. None of you has ever seen a dead donkey.”