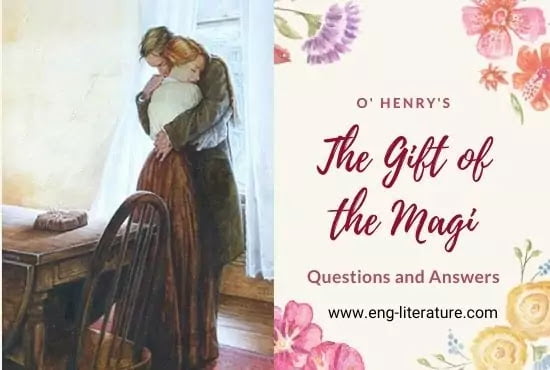 The Gift of the Magi Questions and Answers

Magi is the plural form of magus means wise men. According to the Bible magi (Gasper, Malchoir and Balthaza) were members of priest-hood of ancient Persia. These wise men of the East came to know the birth of Christ from certain signs in the sky and guided by the stars they came to Bethlehem where the infant Jesus lay in manger with the gifts-gold, frankincense and myrrh. They introduced the custom of the exchange of Christmas gift.

O’ Henry opined that there was no mutual love and spirit of sacrifice among the gifts of the Magi.

Love and Sacrifice prompted Jim and Della to sell the greatest possessions of their life. They could not be exchanged for any amount of money. But the gift of Magi could be regarded as duplicate one in comparison with Jim and Della for the Magi collected their gifts merely against money.

The story “The gift of the Magi” allusively unfolds an undercurrent relationship between the Magi and that of Jim and Della. The three wise men of the east brought the richest presents to Christ. Like them, Jim and Della gave gift to each other on the Christmas Day. The Magi were wonderfully wise men but Jim and Della were no less wise than them. For the sake of love they sacrificed their the most precious possessions of each.

Sacrificed their most precious possessions for the sake of love. They unfolded the dead custom introduced by the three wise men to a nobler plane. They are the wisest in the true sense and the magi for they made supreme sacrifice for their love. So, they are ‘The wisest Magi’.

Love is the central theme of the story, The Gift of the Magi. O’ Henry sets up a contrasted picture in life- love among the ruins- the acute poverty in the family and the sacrifice of the greatest possessions of the family. It is love that helped Jim and Della, the hero and heroine to conquer poverty they were in.

story begins with the phrase, ‘one dollar and eighty seven cents’. The writer’s purpose is to create a dramatic effect on the reader and arouse a sense of curiosity of the readers side by side.

Della saved her money living in a miserly, manner, by bargaining with the grocer the vegetable men and the butcher until her cheeks burnt with the silent imputation of parsimony’. In this way she saved only one dollar and eighty seven cents.

Della cried because she had only one dollar and eighty seven cents and with this small amount she could not buy a good present for her dear husband.

Della counted her savings thrice to make sure of the sum for most of her savings were in pennies and with the false hope if the money turned out to be a little more than what it was.

Della counted her saving thrice. It was only one dollar and eighty seven cents. She worried that she could not buy a good present for her dear husband. So, she made her flop down on the shabby couch and cry. This particular reaction of Della made O’ Henry reflect that life is made up with sobs, sniffles and smiles but sniffles pre-dominated life.

O’ Henry reflects this quoted remark on Della’s loving behaviour after Jim, her dear husband, returns home. Della, then calls him lovingly and calls him ‘Jim’ and hugs him. Their sincere conjugal love in utter poverty is praiseworthy. Moreover, their sincere love prompts them to sacrifice their proud possessions of their life.

The Dillinghams lived a poor life. Their income shrank from 30 to 20 dollars per week, they had to pay eight dollars for their flat. The picture of prosperity become blurred with the decrease of income. The letter box was damaged. The electric bell was out of order. There was a cheap pier glass between the windows. The couch was shabby and the carpet was worn. Everything became worn and shabby.

A pier glass is a long and narrow glass. One cannot easily take her full image in it for this. But Della, being slender, had mastered the art of seeing herself in it. He would stand before the pier glass and ‘in a rapid sequence of longitudinal strips obtain a fairly accurate conception of her looks.

On Christmas day Della stood before the pier glass to have a look on her long, beautiful cascade like hair. As she let it fall, it looked a cascade of brown waters.

James Dillinghams had a gold watch inherited from his grandfather and father. Della had the brown rippling hair. Della’s hair reached below her knee and made itself almost a garment for her when she let it fall. Both were proud of their possessions.

Della regarded her beautiful hair as more precious than all the jewels of queen of Sheba of the Bible. Had the queen been her neighbor, she would have proudly shown it to her on some pretext. Jim supposed his watch to be more valuable than all the treasures of King Solomon who reigned in Jerusalem.

The word ‘grey’ has been used thrice in a sentence as a symbol of frustration in Della’s mind. ‘Grey’ is a colour which symbolizes hopeless and frustration. Through the use of ‘grey’ Della’s extreme despair on the external world has been broadly revealed.

Jim’s golden watch had the touch of inheritance. It was his father’s and grandfather’s. The author compared it with the wealth of King Solomon. If the king Solomon set as the doorkeeper with all his wealth stored in the basement Jim would proudly show him his watch every time he passed by only to make him feel envious of him.

M’me Sofronie is the owner of a shop dealing in hair good of all kinds. Sofronie means beautiful but Mme Sofronie was a large, white and chilly woman. She does not have the warmth and loveliness which the name Sofronie implies.

Hashed metaphor means mixed metaphor. “Tripped by on rosy wings” is the mixed metaphor. Hours were as beautiful as rose and hours were as quick as birds flying on wings. These two metaphors have been mixed in phrase rosy wings which refers to Della’s behaviour on receiving twenty dollars by selling her hair and her mad search from store to store to select a nice gift for her dear husband. Hashed or mixed metaphor is a defect in language and it should not be used in Della’s case and should be avoided. So the writer asks the reader to forget the hashed metaphor.

This remarkable phrase refers to both Jim and the platinum fob chain. It is appropriate to Jim for Jim lead a life of simplicity with full of pure love in his heart. His selfless love made him wise. In this sense he was a valuable man. In the same vein, the platinum fob chain was very simple in design and not meretricious ornamentation one. It was valuable for it was made of costly metal.

‘Generosity added to love’ is the tremendous or mammoth task refers to here. Della sacrificed her hair out of love and generosity. Her sincere love persuaded her to make enormous sacrifice that could not be repaired. This task is rare and there are few people who can do such sacrifice.

On Christmas day Jim sold his golden watch and bought a set of combs for his dear wife, Della. On entering the room he found that his gift was useless for Della had no hair to use the set of combs. This peculiar unthinkable situations made him benumbed that he could neither move nor talk. He simply stood motionless and still like a gun dog when it smells a quail.

“Trance’ means dazed condition- a condition of going out of oneself. Jim was in trance because he saw Della with her hair cut. He brought costly combs for her hair and found that they were of no use.

He came out of her trance when Della told him that she sold her hair for buying a Christmas present for him. Her hairs might be numbered but her love for him was immeasurable.

True love does not make any difference between eight dollars a week and a million a year. Jim and Della were in love. They hug each other in warm passion. For a time they forget their poverty, their poorly furnished flat of 8 dollars per week. They experienced the rapture of love. Their flat was costly for them because there was love.

‘They’ refers to the platinum fob chain and a set of combs, the Christmas gifts bought by Della for Jim’s gold watch and by Jim for Della’s brown rippling hair. Their Christmas gifts were useless because Jim did not have the watch to use the platinum fob chain and also Della did not have the hair to use set of Jewel-rimmed combs.

Della tried utmost to soothe Jim by saying that her hair grew so fast and that she was the same Della without her hair and at last, that she could not have lived through Christmas without giving him a gift.

James Dillingham and his wife lived in a poorly furnished flat in New York. Their income was 20 dollars per week. Their economic condition was becoming worse. The letter-box was damaged and the name on the card was blurred. The electric button had gone out of order. But Della’s love for her husband was great. Della sold her brown cascade like rippling hair and Jim sold his ancestral golden watch. Della bought platinum fob chain for Jim’s golden watch and Jim bought a set of combs made of pure tortoise shell for Della’s hair.

Jim and Della called foolish because Della sold her precious beautiful hair and Jim sold his gold watch for Christmas presents. They were their only possessions. They were poor and so it was foolish of them to sell their precious possessing for such small things as Christmas gifts. So, from practical point of view they are foolish. But they made sacrifice for the sake of love. Love made them forget the practical consequences. So, they were not foolish. They are the magi because like the Magi who made gifts to Jesus, their dearest person, they made gift to their dearest persons but of love for each other.