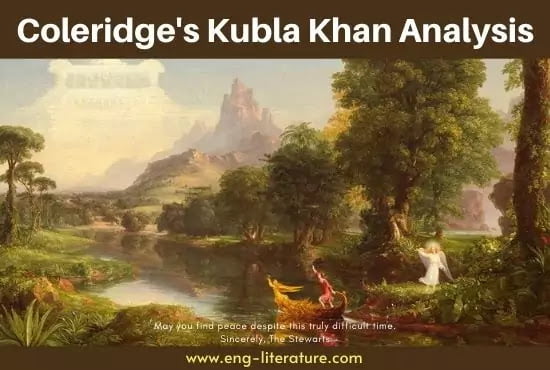 Kubla Khan is the only dream induced poem in English literature and one of the most difficult poems ever written. It is a piece of verbal magic, inspired in a dream. In 1797, one morning Coleridge took an anodyne, and fell asleep in his chair while reading about Kubla Khan in Purchas’s Pilgrimage. In his sleep he composed, as he himself believe, about two to three hundred lines. Though written in 1797 and called a fragment by Coleridge himself, the poem was not published until 1817 in Christabel and Other Poems when in a Preface he had called the poem a “psychological curiosity.”

On awaking he appeared to have a distinct recollection of the whole composition, and immediately started writing down the lines. When he had written down fifty-four lines that are preserved, he was unfortunately called out by a man on business from Porlock and detained by him above an hour. When he came back to his room he found that the rest of the dream-composition had slipped out of his memory and so he could not finish it. The poem has the features of a dream – absence of the logical thread of consecutive ideas, freedom from the domination of rational element, incoherent succession of images and sense of distance.

Though the poem was unfinished it has the completeness of sense. It is divided into two parts. The first part (II. 1—36) describes the magnificent pleasure-palace which Kubla Khan orders to be built in Xanadu, a place gifted with a paradisal landscape and full of bright gardens with many rivulets and incense-bearing trees, very ancient forests and spots overgrown with green mass of vegetation. There is also a hill with a deep mysterious chasm running down its slope. From this chasm water gushes out with such a great speed that huge pieces of rocks are scattered on all sides. It is a savage place. The sacred river Alph which is formed of the water bursting out of this chasm meanders five miles across the whole landscape and at last falls to a lifeless ocean with a roaring sound. In the midst of the tumult of the river Kubla can hear from far the voices of his ancestors prophesying war.

In the second part the poet speaks in his own person. He has a vision of an Abyssinian maid singing of Mount Abora. Mount Abora is Milton’s Mount Amara, and Mount Amara is a fabled paradise. “So the Abyssinian maid is singing” as Graham Hough says, “of a paradisal landscape very like that of the opening lines–singing in fact of the same cluster of ideas under a different name and guise”. If the poet can relive her song in his imagination he himself can build the magic pleasure-dome, as Kubla has done. Thus in the second part the poet makes an attempt to realize his dream–to give it a concrete form.

The poem shows the quintessence of Coleridge’s supernaturalism and romanticism. Here he takes us back to a time and place far removed from ours. Kubla khan, an oriental king, orders a stately palace to be built in Xanadu. An weird atmosphere hangs over the place. The sacred river Alph runs through caverns measureless to man down to a sunless sea. The suggestive expressions like ‘caverns measureless to man’ and ‘sunless sea’ create in us the sense of mystery and fear. The reference to the deep romantic chasm’ slanting down the green hill across the cover of cedar trees serves to intensify the weird atmosphere. The manner the water gushes out from this chasm is supernatural. The water rushes out with so much speed and sound that “this earth in fast thick pants were breathing”.

As in Christabel, Coleridge here transports us to the Middle Ages proverbially associated with magic and enchantment on which supernaturalism thrives. The expression, “woman wailing for her demon-lover” conjures up the picture of a medieval woman wandering about moaning in search of her demon-lover who deserted her after having made love to her.

Kabla Khan is a romantic poem par excellence. Its supernaturalism and subjectivity apart, it is full of the description of the objects and places far removed from us. The allusion to Xanadu, Abyssinia, Mount Abora which is Mount Amara, lends a romantic charm to the poem. But the poem is remarkable for its sensuousness which is a great romantic feature. It is full of sensuous pictures such as bright gardens, incense-bearing trees in blossoms sunny spots of greenery, etc. The description of a damsel playing on her dulcimer and singing on Mount Abora is very sensuous Images are also sensuous. The dome is an agreed emblem of fulfilment and satisfaction. It is breast-like, full to touch and eye, rounded and complete. In the first part it is mentioned three times and every time the word ‘pleasure’ occurs with it as ‘a stately pleasure dome’ (1.2). ‘the dome of pleasure’ (1.31) and ‘A sunny pleasure dome’ (1. 36).

Kabla Khan is Coleridge’s reinterpretation of the old Platonic theory of poetry as a daemonic force. The strong foaming drink on which primitive poetry was nourished has now been mellowed down to ‘honey-dew’ and ‘the milk of Paradise’, but the original frenzy, the ecstasy of intoxication still survives. Keats in his Sleep and Poetry speaks of the might of poetry, like a giant half-slumbering on his right arm. Kubla Khan in his barbaric strength and splendor seems to have been used by Coleridge as a fit symbol of the daemonic might of poetry and his pleasure palace as that of wonder evoked by the vivid conjuring power of the poetic imagination.

Kubla Khan is a poem on creation, of creativity. In the poem, various kinds of creation are showed at various stages. First, Kubla Khan’s aspiring to and then making a palace, is the ‘architectural creation’. Then there is ‘natural creation’, the creation of the river Alph, formed from the Earth. Thirdly, there is ‘musical creation’. The lady on Mount Abora is creating music and song. And finally, and most importantly, there is ‘poetic creation,’ creation of poetry by the poet, creation of song by the poet, capability of the poet to build a castle similar to the one built by Kubla, in the air, out of nothing. Thus out of these four creations, focus is made on the last one the poetic creation to prove that poetic creation is superior to all other forms of creation.

In Kubla Khan we have a succession of images dressed in the colours of the rainbow and evocative of a world of enchantment and mystery. The images are of opposing nature. The images of light and darkness, of sunny dome and sunless sea or caves of ice, and Paradise garden succeed one after another. The dome is the image of fulfilment and satisfaction and the sacred river is that of life. The deep romantic chasm images fear, and the mighty fountain that of inexhaustible energy, now falling, now rising and persisting ever. Then we have the homely images of ‘rebounding hail’ and ‘thresher’s flail’ both of which suggest the vigour of life. The image of “mazy motion” suggests the spiritual complexities of life. “The caverns measureless to man” is the image that suggests the awesome mystery of human life and ‘caves of ice’ final annihilation. In the second part the nature of imagery changes. The images are all related to poetic creation and inspiration and they wear the hazy, remote semblance of a symbolism.

Kubla Khan has been universally valued for its melodious versification. It is perfect music, as John Bowring finely says. The effects scarcely have been more satisfactory to the ear had every syllable been selected for the sake of sound. And yet there is throughout a close correspondence between the metre, the march of the verse and the imagery which the words describe. The full tone and the slow movement of the commencing lines are wonderful:

“In Xanadu did Kubla Khan

Where Alph, the sacred river, ran

Through caverns measureless to man

Down to a sunless sea.”

Kubla Khan which was literally composed in sleep comes nearer than any other existing poem to the ideal of lyric poetry.

“It has just enough meaning to give it bodily existence; otherwise it would be disembodied music. It seems to hover in the air like one of the island enchantments of Prospero.”