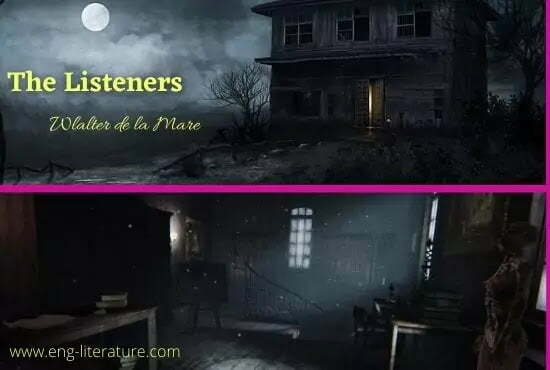 As a poet of the supernatural Walter de la Mare emerges as a worthy disciple of Coleridge. Like Coleridge he avoids crude methods of treating the supernatural and presents it as a psychic phenomenon. We do not find in him the blood-curdling descriptions of ghosts and ghouls, skulls and skeletons. His treatment is subtle, psychological and gossamer-like like that of Coleridge.

Like Coleridge De la Mare places great importance on the creation of a suitable atmosphere. This consists in wrapping round the tale shades of such emotional feeling and apprehension as would make it alien from the world of known and normal things.

The opening of The Listeners illustrates De la Mare’s art. The locality chosen for the scene of the poem is a desolate one. None treads on the forest to which the traveler comes riding; so the forest path is overgrown with fern. The house at the door of which the traveler knocks has long been deserted; so creepers have grown on the window-sill and night-birds have built their nests in it. An unnatural silence prevails all around. The desolate forest is bathed in the dim moonlight which is proverbially associated with supernaturalism.

Thus the desolation of the locality, the silence of the night, and the play of light and shade in the forest (because of the moonlight falling in places through the leaves of trees) all these create an unearthly atmosphere which fills our mind with a feeling of expectancy and thrill. And when the night-bird, startled by the voice of the traveler flies out of the turret just above the traveler’s head, we are at once seized with an uncanny feeling like the wondering traveler himself.

Walter de la Mare does not attach the supernatural to anything concrete and definite. Like Coleridge he invests the supernatural with an air of suggestion and indefiniteness, which not only stirs the reader’s imagination, but also throws him into a state of vague fear and suspense.

In the poem nothing is told definitely-everything is kept vague and shadowy with the result that we are made to move only in an atmosphere of conjecture. The poet tells us nothing about the traveller who comes riding to the forest — who he is, from where he comes, why he knocks at the door thrice, neither more nor less. The lines,

“Tell them I came, and no one answered,

That I kept my word,”

indicate that there was an engagement but nothing is said about the nature of the engagement. Again, the poet keeps mum about what happened to the inmates of the house, and who the phantom listeners are. Everything in the poem is shrouded in mystery. As Monro finely says, “we are not at all certain whether the traveler, who does speak, be not the unreality, and the listeners who fail to speak, the reality in the episode.”

The poem has none of the usual crude paraphernalia of the supernatural the fearful description of the physical appearance of ghosts or goblins or skeletons. The supernatural is presented here as a phenomenon of the mind. The supernatural fear that the traveler experiences when none responds to his second call is presented through his mental flurry and uncertainty perplexity and speechlessness. Again, the traveler cannot see the phantom listeners. He only feels that they are thronging on the dark staircase, and listening to his voice.

Like Coleridge, De la Mare believes that the world of the supernatural is situated on the borders of those of the natural. Nature, palpable, real and familiar has yet in its extreme a somewhat eerie appeal to us. In The Listeners the poet brings the natural on the verge of the supernatural. The forest to which the traveler comes riding is natural indeed, so are the deserted house, dim moonlight, “the forest’s ferny floor”, the bird flying out of the turret, “leaf fringed sill” and the silence prevailing all around.

But when the lumped together, these natural objects are so refined and rendered so strange that we seem to stand on the borders of the supernatural world. Walter de la Mare has the wonderful power of bridging the gulf between the world of living beings and the world of the dead. In the lines,

“But only a host of phantom listeners

That dwelt in the lone house then

Stood listening in the quiet of the moonlight

To that voice from the world of men.”

“Tell them I came, and no one answer’d,

That I kept my word.”

the two worlds meet together and act and react on each other. Scott James’ observation that “his (Mare’s) poetry is always a wonderland brought to earth or the earth transfigured by wonder-land” is fully applicable to The Listeners.

Lastly, the poet’s style does much to intensify the supernatural atmosphere. Such suggestive phrases as “the forest’s ferny floor,” “leaf-fringed sill”, “empty hall” serve to build up an atmosphere of desolation, while the expressions like “moon-lit door” “the starred and leafy sky”, “plunging hoofs” wrap the whole tale in a veil of mystery.