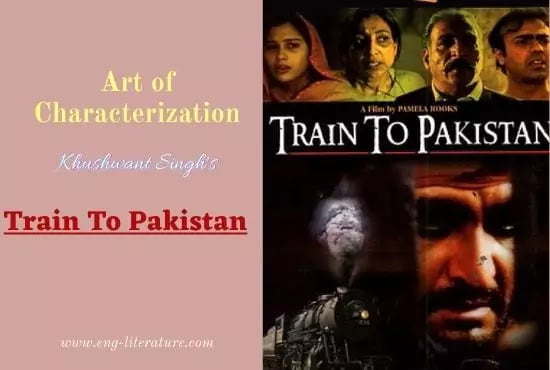 Art of Characterization in Train To Pakistan

Khushwant Singh is a master craftsman in Art of Characterization. He designs his plots and characters with ingenuity and co-relates the two judiciously. It is difficult to say whether plot is more important or the characters in a novel. Aristotle has said that characters are subservient to plot, but with the lapse of so great a time art of characterization has undergone a great change.

Khushwant Singh in his Train to Pakistan presents characters in his own way. He does not give much importance to the physical features to make them individuals; he gives some minor details though only in some cases. He sometimes mystifies the readers by showing a character differently from what is said about him in the introduction in beginning.

The character of Meet Singh, for example, is introduced as someone having no great qualities. The novelist says in introduction, “Meet Singh inspires no such affection and respect.” He makes him abominable by giving some details of his figure–“Even his appearance was against him.” This description of his structure and habits will only repulse a man at the first sight of the priest.

The novelist further detracts him with the information that Meet Singh was initially a peasant with a little land and a malingerer. He became a priest because he wanted to escape from work. He has leased out his land, to live on the income from the land and offering at the Gurudwara. There is no explanation why he made a fellow so mean-looking and disinclined to work though he comes out to be a different man.

The novelist has found one saving grace in beginning, but after sometime he got the sense that the girl he was flirting with was of the age of his daughter if she had been alive. Finally, he realised “No fool like an old fool………… It was bad enough for a married man in his fifties to go picking up women. To get emotionally involved with a girl young enough to be his daughter and a Muslim prostitute at that.” Thus, the novelist allows the characters to grow into sensible, responsible man.

Iqbal is the flip side of Meet Singh and the Lambardar. He appeared on the scene with great aplomb, speaking on the proletariat movement against bourgeoisie, and with a Missionary Zeal to prevent blood-shed in the village on the border of the two countries. But instead of doing anything good, he spoke against Indian customs with contempt.

He noticed the inborn quality of discrimination among Indians even the lavatories had the labels of class distinction separate lavatories were reserved for senior officers, for junior officers, clerks and stenographers, and other ranks.

The matrimonial columns disgusted him when he found that only a few were willing to be married to widows, but that too if they were not deflowered’. He did not find anything of interest in the newspaper.

When the opportunity came for action, he found it was not safe for him to appeal to the masses to desist from killing the Muslims-He thought that his sacrifice would do no good to anybody–“It would do no good to society, society would never know. Nor to yourself: you would be dead.” He argued that one should do good only when the receiver is the ready to receive. The Indian society, he imagined, was not adequately disciplined to appreciate his sacrifice. Therefore, he gave up the idea of trying to bring peace and amity to the village.

He deprecated even Yoga which was acclaimed world-wide. He thought, “Yoga, particularly Yoga, that excellent earner of dollars ! Stand on your head. Sit cross-legged and tickle your novel with your nose.” And the Indian philosophy he thought was humbug-“We are of the mysterious East. No proof, just faith. No reason, just faith.” About art and music of India, he said with an aversion that it was obsolete “It is ugly. It must be scrapped like the rest.” His final view was “that the things are so rotten that your first duty is to destroy to wipe the slate clean.” The character which appeared revolutionary turns out to be of no good. Even Jugga as better than him who sacrifices his life to prevent holocaust at the cost of his life without caring to know whether anybody would ever come to appreciate it.

The novelist has portrayed the character of Juggut Singh in bright colours. He is a dacoit, son of a dacoit who was hanged to death. So he received the profession of dacoity in heritage. Jugga who was six feet in height. Being a dacoit he extorted money from persons like Rama Lal. He told Iqbal in the lock-up that he was not so foolish as to kill the hen that laid the golden eggs.

Jugga complained against the police practice of arresting him whenever there was an unlawful incident in the area even when he was not involved in it. He was arrested in connection with the dacoity committed in the house of Ram Lal, though he had no hand in it. When he was released by the police, he decided to save his beloved at all cost. He did not care for his life. It was not expected of an outlaw to go to that extent to save his beloved. He did not find any pretext like Iqbal to escape from his duty; he performed his duty well and died in the process, no matter whether anybody took notice of it or not. But Jugga is revealed in bits. We see him initially as a dacoit, then as a fiery fellow, and finally a great lover.

The novelist has surprised the readers by revealing new and unexpected aspects of the personality of his characters.