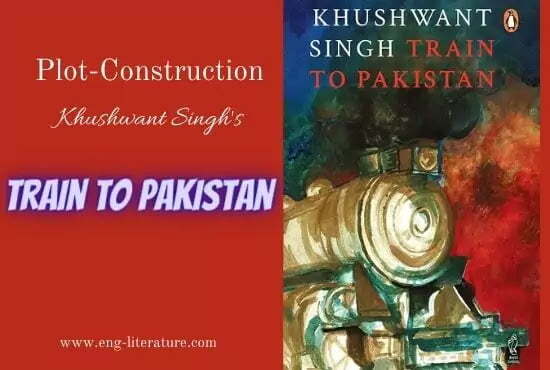 Plot Construction in Train To Pakistan

Novel writing is an art, requiring knowledge of life-style of the people of the age with which the story is related, imagination to create episodes and to link them with one another, to arrange them in a series having a beginning, a middle and an end. The story of a novel may be fictitious, yet it is not far from the truth, since it depicts a true picture of social, economic and political conditions prevailing at the time.

Train To Pakistan is about the holocaust that took place in 1947 when India was divided into two countries India and Pakistan. The novelist tells us in the very first sentence that it was the summer of 1947 which was hotter than usual and drier and dustier because it had not rained. The political condition was unstable and explosive. The riots had broken out in Calcutta which took a toll of several thousand lives. The fire spread to Nookhali in Bengal where Muslims messacred Hindus and to Bihar where Hindus massacred Muslims. Thousands of Hindus and Sikhs who lived in Frontier Province for centuries fled to the safer areas, Khushwant Singh being a veteran journalist knew the situation and described it with a sense of responsibility. Thus, he begins this novel with a veritable report on the political situation of the country.

But this report does not form the beginning because the novel is not about the country but about a small village, Mano Majra situated on the border of the two countries. It is a small village consisting of about 70 families, one of which is a Hindu family of Lala Ram Lal who is a money-lender. The others, the Sikhs and the Muslims were in equal number, but the Sikhs are the land owners while the Muslims are the tenants. There are a few families of sweepers whose religion was not known.

But there is one object that all Mano Majarans, including Lala Ram Lal sed. It is three-foot slab of sandstone that stands upright under a keekar tree beside a pond. It is a local deity worshipped by all the villagers, Hindus, Muslims, Sikhs and psuedo-Christians. Thus, this deity is the uniting force in the village.

Mano Majra is a tiny village, untouched by the questions and controversies and struggles which beset the cities. This village is about half a mile from the Sutlej, cut off from even the neighbouring cities and their culture. Mano Majra doesn’t have a clock. The routine is regulated with the arrival and departure of the trains. The mail train in the morning wakes up the people, alerts the Mullah to give a call of Morning Prayer and the Mullah’s call in turn gives a hint for the priest in the Sikh Temple to come out of the bed. The train at 10.30 a.m. would find people busy in fields and household chores. The mid-day express would send people to their homes for lunch and a short nap. The evening passenger train from Lahore would announce that it was time for dinner and the goods train would say good night to the whole populace of the village.

The action begins with a dacoity and murder committed by Malli and his gang in the house of Ram Lal. Money-lenders are always looked upon as wicked persons. The dacoits kill Ram Lal to purge the village of the only evil character it has. The rest of the people live in perfect harmony, oblivious of the fighting and killing going on in other villages. The police arrests Jugga Badmash though dacoity was committed by Malli in order to know the names of the dacoits from him and also to prevent him from inciting communal hatred.

Iqbal arrives in the village on the day of dacoity and goes to stay in the Gurudwara where Bhai Meet Singh and the Lambardar extended hospitality to the stranger. But Iqbal is the man who introduces the people with communistic ideology and also with the communal riots going on in other villages. He tells frankly that he has been sent by his party to take preemptive action against the carnage that is likely to take place with the arrival of the refugees. But before he does anything he is also arrested for coming to this village in a suspicious manner and imprisoned under the false name of Iqbal Mohammed though he is a Sikh, named, Iqbal Singh.

The novelist has also given a short account of the cruelty of the Muslim on innocent Sikhs and Hindus to show at a later stage that Sikhs, on the contrary, treated Muslims of Mano Majra as brothers and would not hear to send them to the refugee camp for their own safety.

The novelist has revealed the perverted Muslim psyche. The Muslim soldiers take sadistic pleasure in killing innocent passers by. As against this Bhai Meet Singh speaks harshly to the youth who wants to kill Muslims in Mano Majra asking him not to try to do any harm to the Muslims because the local Muslims have done no harm to them. He further says quoting from Guru Gobind Singh that they should not kill innocent persons and touch a Muslim woman. The novelist has made no secret of his view that Muslims are barbarous and brutal while the Sikhs and the Hindus have a regard for the innocent.

In the middle part of the novel, information is given how the trains loaded with thousands of dead bodies of the Sikhs came to the station of Mano Majra. The people of Mano Majra are asked to give fuel and kerosene oil as much as they can spare, yet they are not told why the fuel is required. People stand on the roofs of the house to see what is being done at the station. They see nothing but the smell of burning oil, and fuel and flesh has told them for sure that the dead bodies are being incinerated. Hukum Chand, being the Magistrate, supervises the cremation. He is shocked by the horrible sight. He has nightmares of the dead bodies in the train, even the lavatories are full of them- Hukum Chand began to moan and then with a final effort broke out of the nightmare with an agonized shriek. “He sat up with a look of terror in his eyes.” Hukum Chand feels that it is the real Kalyug in which so many innocent persons are being mercilessly killed.

The novelist has taken opportunity to describe the harmonious relations between the Sikhs and the Muslims in Mano Majra in the midst of killing going on all around, including Chundunnagar which is not very far. People of Mano Majra gets the news of riots going on. There are some youngmen who want to kill the local Muslims to avenge the wrongs done by them in other places, but they are snubbed into silence by the saner voices of Bhai Meet Singh and the Lambardar.

After a long discussion it is decided that the Muslims of Mano Majra should shift to the refugee camp for some time, leaving their houses and cattle in the careful custody of the Sikhs with the tacit promise that their properties will be returned to them on their return. Though the Muslims are to go for a short time, yet there is lot of crying and embracing one another. If the previous chapter is titled ‘Kalyug’, this third chapter could well be titled “Satyug” since there is an overflow of powerful emotions.

The end of the novel has been beautifully designed. Iqbal and Juggat Singh who are kept under detention only as a precautionary measure are released. The Sikh youths make plans to kill the Muslims going to Pakistan, but Juggat Singh’s love frustrates their plan. He decides to save his beloved. He has to save his love by all means, even at the cost of his life. He climbs up to the rope that the Sikhs had tied across the first span of the Bridge and cuts down the rope, lets the train pass unhurt. But Juggat Singh is killed. The novel closes with the message of love given through a dacoit.

This novel fulfils Aristotle’s condition for a good plot of having a proper beginning, a middle, and an end. But the beauty of the plot lies in the unity of the scenes. We meet characters Jugga, Nooran, Iqbal, Bhai Meet Singh, Lambardar Banta Singh, Hukum Chand and others in every chapter, though they keep appearing and disappearing according to the situation in each chapter.

There are other episodes of not so great importance which have their parts scattered all over the novel to make it a united whole. Hukum Chand’s hedonism begins with his arrival at the guest house and continues till the end when he realises that it is shameful for a man of his age to flirt with a girl of the age of his daughter. He continues to evolve bit by bit to become a sensible man in the end.

The role of police also unites all the parts of the novel. It is in the first scene that the Sub-Inspector gives his report that the situation in Mano Majra is peaceful. The Magistrate, Hukum Chand, however, is apprehensive since the reports coming from other places are disquieting. The alertness of the police bears fruit-nothing untoward takes place in Mano Majra till the end. Juggat Singh and Iqbal are arrested in the exposition part of the novel. They continue appearing on the scene intermittently and are released in the end to play their parts-Jugga sacrificed his life for his love and Iqbal decides to leave India all disenchanted.

The novelist has cleverly kept all the strands tied together to make the plot full and complete.