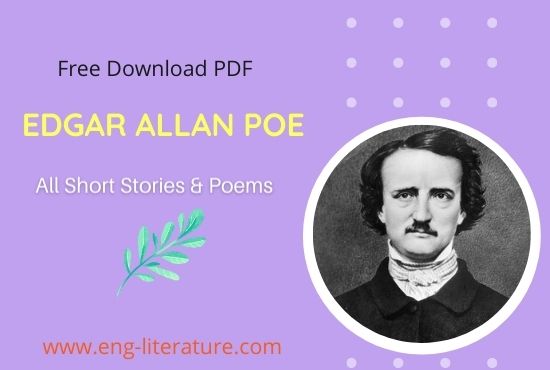 Born in Boston, USA, Edgar Allan Poe occupies a distinct place as a renowned American Short Story Writer, Poet, Critic, Book Reviewer and an Editor. Edgar Allan Poe was born as the son of the English-born actress Elizabeth Arnold Poe and David Poe, Jr., an actor from Baltimore on Jan. 19, 1809. His father was irresponsible, rash, impetuous and addicted to drinking. Shortly after his birth his father disappeared and his mother died on December 8, 1811, leaving three children orphans, when Poe was just two years of age.

The children were adopted by various families. Edgar was taken into the home of John Allan, a wealthy tobacco merchant in Richmond at his wife’s request and gave him the middle name Allan as a baptismal name, though he never formally adopted him. Allan never treated Poe with sensitivity.

He was later taken to Scotland and England (1815-20), where he was given a classical education that was continued in Richmond. The gothic architecture and historical landscape of the region made a deep Imprint on his youthful imagination, affected his adult writings.

The Allans left England in June 1820 and arrived in Richmond on August. Here, Poe entered the English and Classical School of Joseph H. Clarke, a graduate of Trinity College in Dublin.

On February 14, 1826, Poe (then 17) entered the University of Virginia, taking classes in Latin, Greek, French, Spanish, and Italian. Though he spent more time gambling and drinking than studying and often arrived to class unprepared, he won top honors in French and Latin.

Poe returned to Richmond to find his sweetheart Sarah Elmira Royster, whom he had met and fallen in love with before going to Virginia, engaged.

Poverty forced him to join the army. On May 26, 1827, Poe enlisted in the US Army under the name Edgar A. Perry. He joined Battery Hof the 1st Artillery, then stationed at Fort Independence.

In 1833 his story ‘MS.Found in a Bottle’ won $50 from The Baltimore Visitor. And in 1834 Alan died without mentioning Poe in his will. In 1835, Thomas Willis White hired him as an editor at the Southern Literary Messenger, in which he published short stories, poems, and literary reviews under his direction. The publication thrived under his direction. There he made a name as a critical reviewer and felt financially secure to marry his young cousin Virgina Eliza Clemm, who was only 13.

Poe seems to have been an affectionate husband and son-in-law. But later alcoholism. In fact, Poe seems to have suffered from a physical ailment that rendered him so sensitive to alchohol that a single drink could induce drunkenness.

His wife, Virginia, died in January 1847. For the few remaining years of his life, he helped support himself by delivering a series of public lectures. He got involved in a number of romances. In 1848 Poe went to Providence, R.I., to woo Sarah Helen Whitman, a poet. There was a brief engagement. Poe had close but platonic entanglements with Annie Richmond and with Sarah Anna Lewis, who helped him financially. In 1849 he went south, had a wild spree in Philadelphia, but got safely to Richmond, where he finally became engaged to Elmira Royster, by then the widowed Mrs. Shelton, and spent a happy summer with only one or two relapses.

Edgar Allan Poe Cause of Death

Poe had some forebodings of death when he left Richmond for Baltimore late in September. There at a party, he began to drink Leavily. The indulgence proved fatal, for Poe had a weak heart. He died on Oct. 7, 1849 before he could marry Elmira Royster. He was buried in Westminster Presbyterian churchyard in Baltimore.

Edgar Allan Poe as a Poet

Poe supported affective experience or the old practice of judging a poem by the emotional effect that it produces in the reader. Poe stated that a poem deserves its title only inasmuch as it excites, by elevating the soul.”

Poe’s work owes much to the concern of Romanticism with the occult and the satanic. It owes much also to his own feverish dreams, to which he applied a rare faculty of shaping plausible fabrics out of impalpable materials. With an air of objectivity and spontaneity, his productions are closely dependent on his own powers of imagination and an elaborate technique. His keen and sound judgment as appraiser of contemporary literature, his idealism and musical gift as a poet, his dramatic art as a storyteller, considerably appreciated in his lifetime, secured him a prominent place among universally known men of letters.

Much of Poe’s best work is concerned with terror and sadness. His yearning for the ideal was both of the heart and of the imagination. His sensitiveness to the beauty and sweetness of women inspired his most touching lyrics (“To Helen,” “Annable Lee,” “Eulalie,” “To One in Paradise”

Poe is conspicuous for a close observation of minute details, as in the long narratives and in many of the descriptions that introduces the tales or constitute their settings. Closely connected with this is his power of ratiocination.

He was capable of writing angelic or weird poetry, with a supreme sense of rhythm and word appeal, or prose of sumptuous beauty and suggestiveness, with the apparent abandon of compelling inspiration; yet he would write down a problem of morbid psychology or the outlines of an unrelenting plot in a hard and dry style.

Edgar Allan Poe as a Critic

As a critic, Poe laid great stress upon correctness of language, metre, and structure. He formulated rules for the short story, in which he sought for the ancient unities: i.e., the short should relate a complete action and take place within one day in one place. To these unities he added that of mood or effect. He was not extreme in these views, however. He praised longer works and sometimes thought allegories and morals admirable if not crudely presented.

It was important to Poe to make “The Raven’ “universally appreciable.” It should be appreciated by the public, as well as the critics. Poe chose Beauty to be the theme of the poem. He held that simple earthly elements have the power to elevate a poet’s soul to the vision of Beauty; in order to reach this vision, the poet will form a pattern of physical loveliness to reflect the perfect unity of the universe. Poe considered sadness to be the highest manifestation of beauty. He chose the universal theme of Death as his topic and believed that the death of a beautiful woman was the most poetical use of death, because it closely allies itself with Beauty.

Poe builds the tension in this poem up, stanza by stanza, but after the climaxing stanza he tears the whole thing down, and lets the narrator know that there is no meaning in searching for a moral in the raven’s “nevermore”. The Raven is established as a symbol for the narrator’s “Mournful and never-ending remembrance.”

“Annabel Lee” is the final poem composed by Edgar Allan Poe. It was written in 1849 and published just few months before his death. It highlights a subject that appears frequently in Poe’s writing: the death of a young, beautiful woman. The poem is narrated by Annabel Lee’s lover, who forcefully rails against the people—and supernatural beings—who tried to get in the way of their love. Ultimately, the speaker claims that his bond with Annabel Lee was so strong that, even after her death, they are still together.

With their gothic styling, tone of dread, atmosphere of unreality, and macabre details, Poe’s tales seem at first glance to be simple scary stories. But they’re more complex than that. Poe’s narratives are marked by dualistic themes that recur from story to story. Perhaps they represent Poe’s own conflicting fears, given his history of alcoholism and unrestrained bouts of self-sabotage. The first of these dualistic themes is loss of control — either control of one’s mind, or of one’s actions due to insanity or intoxication.

“The Tell-Tale Heart” is a short story by Edgar Allan Poe first published in 1843. It follows an unnamed narrator who insists on his sanity after murdering an old man with a “vulture eye”. The murder is carefully calculated, and the murderer hides the body by cutting it into pieces and hiding it under the floorboards. Ultimately the narrator’s guilt manifests itself in the hallucination that the man’s heart is still beating under the floorboards.

It is unclear what relationship, if any, the old man and his murderer share. It has been suggested that the old man is a father figure or, perhaps, that his vulture eye represents some sort of veiled secret. The ambiguity and lack of details about the two main characters stand in stark contrast to the specific plot details leading up to the murder.

The Fall of the House of Usher

“The Fall of the House of Usher” possesses the quintessential -features of the Gothic tale: a haunted house, dreary landscape, mysterious sickness, and doubled personality. Poe uses traditional Gothic elements such as inclement weather and a barren landscape. Poe creates a sensation of claustrophobia in this story.

The story begins without complete explanation of the narrator’s motives for arriving at the house of Usher, and this ambiguity sets the tone for a plot that continually blurs the real and the fantastic. “The Fall of the House of Usher” begins with the unidentified male narrator riding to the house of Roderick Usher, a childhood friend whom the narrator has not seen in many years.

The Cask of Amontillado

“The Cask of Amontillado” by Edgar Allan Poe, is a short story inspired by true events that took place on Castle Island, a former military fort off of Boston Harbor, in Massachusetts. When Poe was stationed there as young cadet in the Army, he found a peculiar gravestone. After some inquiry, he learned a story of a man who had been walled up alive. Forbidden by his commander to ever repeat the particulars, Poe took the plot line, changed the setting and characters, and wrote this story.

The story is set in Italy, during the Carnival. The narrator, Montresor, without giving the particulars, explains that he has a grudge to settle with Fortunato, who insulted him. Both men being wine connoisseurs, Montresor lures Fortunato into his catacombs by promising him a fine bottle of Amontillado wine.

As the two men travel into the catacombs, Fortunato has no inkling that his friend will betray him. Fortunato is ill, battling a bad cough. Surprisingly, Montresor urges his friend to turn back. Laden with irony and foreshadowing, Fortunato claims, “I will not die of a cough” and continues with Montresor.

When the men finally reach the base of the crypt, Montresor has bricks and mortar awaiting them. He chains Fortunato to the wall and seals him in alive.

The Murders in the Rue Morgue

The Murders in the Rue Morgue is a short story by the famous writer Edgar Allan Poe. The main character of this story is a detective C. Auguste Dupin. He’s in charge in cases of bizarre murders that occur mainly in Paris’ Rue Morgue. This detective later served as a prototype for many detectives, presumably even the famous Sherlock Holmes (Arthur Conan Doyle) and Hercule Poirot (Agatha Christie).

“The Black Cat” is yet another classic murder tale from Poe. The unreliable first person narrator is writing his account on the eve of his execution for murdering his wife. The story starts out with a boy who preferred the company of animals to the company of his peers. When he grows up, he finds a woman who feels the same way and they get married. The narrator admits throughout the story that his bad habits, namely alcoholism,  lead to his irrational state of mind.