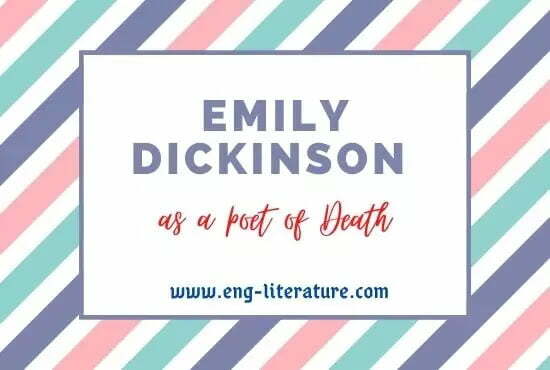 Emily Dickinson as a Poet of Death

The theme of Death loomed large almost one third of the bulk of Emily Dickinson poems. Throughout her life she was preoccupied with death. To her death is the supreme touchstone for life. Investigation of the theme of death gave her a panoramic view of vital issues such as religion, God, nature, love and immortality.  She referred to death not only in her poems but also in her letters to her friends, sometimes her attitude towards death is that of awe and fear; at other times she seems to be in love with death and regards it as a gateway to eternal and permanent rest.

In a letter to T. W. Higginson dated 1863, she referred to her early awareness of death:

“Perhaps Death gave me awe for friends-striking sharp and early, for I held them since in a brittle love, of more alarm, than peace”

She saw death all around herself, in her family, friends, love, life and convictions. On one occasion she explained why her ideas were rather dark : “I have just seen a funeral procession go by of a negro baby, and if my ideas are rather dark you need not marvel.” She accepts death as a physical fact, as a material truth. Her pre-occupation with death largely be owing to her Puritan surroundings. In the Puritan doctrine of existence death theme occupied a solemn place. For the Puritan death is the climax of living, and it must be taken in a solemn way.

In “Adrift! A little boat adrift” the poetess compares death with night and her life with a boat. In “I haven’t told my garden yet–” there is the tone of mockery and death is talked of as something that does not deserve one’s attention:

“I will not name it in the street

For shops would stare at me –

That one so shy-so ignorant

Should have the face to die.”

There are poems which simply dramatize death, observing the dying or the dead from specific angles, studying character psychology before or after the climatic point, that is death. Some of the poems are reflections on cemeteries, funeral processions or acts of burial. “Bless God” death is spoken of as a person with a ‘musket of his breast, and who would charge the bravest of all the martial blest.’

Her poem “I heard a Fly buzz- when I died-“ highlights on the morbidity of death and what may happen after a person’s physical body dies.  For Dickinson, this exploration of the afterlife leads her to believe that death can potentially be a disappointment instead of something to lean toward.  For instance, there are all the trimmings of a death scene in this poem: there is a “Stillness in the Air” and “The Eyes around–had wrung them dry–“ as the dying speaker’s loved ones surround her bed, waiting for her last moments.

“And then the Windows failed – and then

Poems like “Just lost, when I was saved,” “How many times these low feet staggered,” present death as moving to a pre-chosen destination to take possession of the objects it has decided on in a cool, calculated manner. In “A Visitor in Marl,” death is spoken of as something inevitable:

“As Visitor in Marl–

Till they are orderly as Busts-

And Elegant -as Glass –

Who visits in the Night

AND JUST BEFORE THE SUN –

Caresses – and is gone”

Poems like “I want to thank Her,” “It feels a shame to be Alive”, “I think I was enchanted,” “Her sweet turn to leave the Homestead” etc. are elegiac in tone, and recapture in words the moods of the speakers as they confront death. The gap between life and death is unbridgeable, but this realization comes only when one is betaken by death:

“Our journey had advanced

Our feet were almost come

To that odd Fork in Being’s Road –

Between The Forest of the Dead –

At last she walked between belief and disbelief, yet was always obsessed by death:

Is the uncertain certainty”.

“Because I Could Not Stop for Death” is one of her best poems on death. It is also remarkable for its imagery. In this poem, the poetess suggests that the best way to overcome death is to conquer it:

“Because I could not stop for Death,

He kindly stopped for me,

The carriage held but just ourselves

We slowly drove, he knew no haste,

And I had put away.

My labour, and my leisure too,

We passed the school where children played

At wrestling in a ring

We passed the fields of gazing grain,

We passed the setting sun.

We passed before a house that seemed

A swelling of the ground

The roof was scarcely visible,

The cornice but a mound

Since then ‘t is centuries, but each

Feels shorter than the day

I first surmised the horse’s heads

The idea that death is a gateway to immortality has been expressed frequently by Emily and in one of her poems she likens death to a pilot which takes the human soul to the shores of Eternity.

On this wondrous sea,

Knowest thou the shore

Where no breakers roar

Where the storm is o’er?

In the silent west

Many sails at rest,

There I pilot thee, –

Just as the diver is rewarded with the pearl after taking plunge into the depth of the ocean and just as the seraph has been raised to the first rank, similarly immortality is the reward for human beings who face death calmly and boldly. Our attention should be focussed on immortality rather than on death:

Extorted from the sea –

Night is the morning’s

Death, but our rapt attention

In some poems, Emily Dickinson portrays death as a cruel personal enemy and as a brutal killer who attacks his victims without any mercy or permission. In “A Clock stopped”, the poet shows how her subject suffers in the dying moments. The dead clock is compared to heart that has stopped beating. The poet uses the clock and its second hand to represent the heart. To use the dead clock representing the heart enables the readers to perceive a clear picture of when the heart has stopped beating and death has occurred.

In “What care the Dead, for Chanticleer”, Dickinson portrays death as a leveler i.e. there is no exception for death. She uses death as God’s vehicle to bring all human lives to heaven.

In “Color-Caste-Denomination” and “Not any higher stands the Grave”, Dickinson personifies death as a democrat, the great equalizer or the force which claims without discrimination men and women.

In “Death is the Supple Suitor”, death assumes the character of a skillful lover wooing a lady.

In “All but Death can be Adjusted”, the poet portrays death as predetermined and fixed end, something which is fixed for all human beings. Death is the fate that nobody can change except God.

To sum up, death has its own claims on Emily Dickinson. Wendy Martin believes that,

“Death was the problem for Dickinson, a riddle she could never solve, but which she always explored”