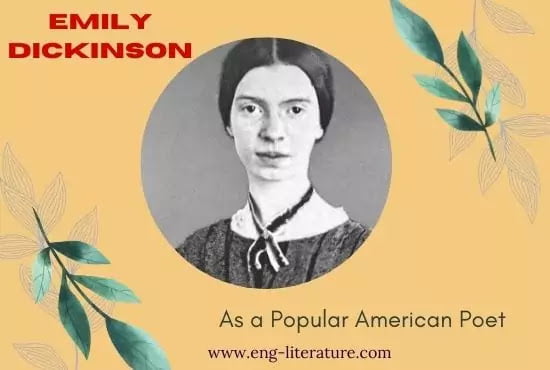 Emily Dickinson as an American Poet

Emily Dickinson was a renowned American poet of the nineteenth century. She was “the most perfect flower of New England Transcendentalism,” and anticipator of metaphysical poetry, a smeller of modernity, and an upholder of romanticism. In her wit she was metaphysical, in her attitudes a Romantic and in her poetics, a modern. A.C. Ward has called her “Perhaps next to Whitman the greatest American poet of the last century.”

Although isolated from active life of hurly burly, secluded from the practical experiences of life, living in her ivory tower, she wrote on a great variety of subjects. She wrote on life, on death, on contemporary social scene, on mortality and immortality, on pain and pleasure, on hope and fear, on love, Nature, God, religion, and virtue.

Like Blake she could see eternity in the grain of palm, in the blade of grass, in the chirp of birds and the sound of the stream. She had a richly romantic soul that found strange beauty and startling suggestion in the simplest elements of experience-the glance of a friend, a sentence in a book, a bee’s hum, a stone in the road, or slant of light on winter afternoons.

The first thing that strikes us on reading the poems of Miss Dickinson is their great originality. She belonged to no school of poets and hardly cared to imitate anyone’s style. A few thought that she was influenced by Whitman’s style. In fact we have the assertion of Emily Dickinson that she never read Whitman and she had been told that “he was disgraceful.” There is greater truth in the suggestion that Emily Dickinson poems smack of Emerson’s poetry. A comparative study of Emerson’s and Emily Dickinson’s verse makes this clear.

In the form of scraps, letters and her scattered observations, she framed a poetic creed which is not systematic. According to her, poetry is an expression of her private grieves. In a letter she wrote: “If I read a book and it makes my whole body so cold no fire can warm me, I know that is poetry. If I feel physically as if the top of my head were taken off. I know that is poetry.” Great poetry is identified by its soothing effect.

Emily was a romantic at heart. She was a great lyrical poet like the great romantic poets. In her poetry too we find the major qualities of the great romantic lyrical poets. We have the same love for nature, same personal and emotional note, same pessimism and melancholy, same musical craving to express the grief hidden, and the same richness of imagination as found in the great romantic poets of the nineteenth century. She also has the usual spontaneity. Her themes are also romantic by and large. In her techniques and in her revolt against the Calvinistic tradition of her times she is very much unromantic. Her mysticism and love of beauty is also akin to romanticism.

In short, hers is a lyric genius, neither dramatic nor narrative. She wrote about 100 lyrics. She has the precision and economy of expression needed for a lyric. She brought freshness, vivacity, wit and restraint into the lyric form. Her poems are rightly called “bolts of melody,” tinkling piano tunes. Hers are the poems of “self.”

Her recurrent themes are life, death, soul and love. About one third of her total poetic output relates to death. She is the poet of the limitless reaches of the inward mood and consciousness. She explores human soul and grasps the essence of human experience. She is taster of epigram too. She makes capital out of capitalization of and use of dashes and punctuation. One of her most notable abilities is her skill in giving concrete expression to abstract idea.

Emily Dickinson was a modern poet, and she anticipated Hopkins and Pound. Her conceits and jottings, her technical innovations and brevity show her modernity. As the editors of The American Tradition in Literature observe,

“Readers of the Twentieth Century would understand her better, for it was their idiom that she spoke.” In the words of Norman Forester, “Emily Dickinson seems to have experienced, far in advance, something like the spirit of revolt, the skepticism, the freedom of expression that flourished after her the First World War.”

Like the moderns she discovered that sharp, intense image is the poet’s best instrument. She also anticipated the modern enlargement of melody by assonance, dissonance, and “off rhyme,” the utility of the ellipsis of thought and the verbal ambiguity In her images and symbols also she is like the modern poets. The lines such as “I Felt a Funeral, in my Brain,” the image of box and boot, sink city, the decayed house, coughing goat, sneezing woman and peevish gutters are modern and symbolize spiritual decay and impotence of the present age.

Emily Dickinson poems are confessional document of the eccentricities of the poet’s mind. It is a record of her reactions to some unnamed events in life. She lacks the pure objectivity of the modem poets especially that of Eliot who says that poetry is not an expression of personality but an escape from personality. The picture of Emily Dickinson that emerges from her poems is that of a saintly recluse who defied the conventions of society and who rebelled against the tenets of formal religion. Her egotistical defiance of society and her nearly blasphemous attitude to religion are not the results of immature adolescence. Many of her poems reveal her frustration and her obsession to death.

“Tell all the truth

But tell it slant.”

So wrote Emily. According to her poetics, direct statement of ideas or direct communication of emotions is not useful. “Her poetry is fundamentally oblique where an idea is communicated, or an emotion recreated not by direct verbal statement but through evocation of appropriate images. Thus, in effect, the image becomes the medium of the poet’s communicating process.“ the image, therefore, has an important role to play in her poems.

Most of her images are drawn from flowers, bees, spiders, wars, voyages of exploration, lightening and volcanoes. There are geometrical and surrealistic images too.

Just mark a few of images,

Always a Flower would be

The Attar From the Rose

Be not expressed by Sungs–alone

It is the gift of screws.

For Thee a Bee do I become

As mentioned by Albert. J. Gelpi, the rose symbolizes natural phenomena; the sun, the transcendent fertilizing power; and the attar, the artistic distillation. The spider is the symbol of the artist, who spins around him a world of imagination. The poetess calls the spider “the neglected son of genius.” The images of the sea, voyages and exploration symbolize the poet’s yearning to explore the mysterious continents of her inner self.

Her imagery is complex and functional. In extreme flights of imagination she uses images which seem surrealistic in their content For instance in the poem. “I’ll tell you how the sun rose”, the poetess speaks of the sunrise in terms of ‘a ribbon at a time.’ So is the images of the “hills untieing their bonnets.” Her most frequent metaphor for ecstasy is circumference.

Strange use of capital letters, frequent use of dashes, use of synonyms, repetition of metres, use of irregular metres and rhythms, slanting manner of expression, brevity and conciseness of expression. use of colloquial expressions, grammatical irregularities, are some of her well-known technical popularities.