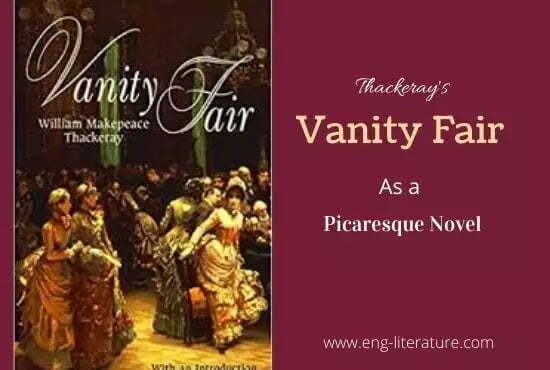 Vanity Fair as a Picaresque Novel

The very term, “Picaresque” has been originated from the Spanish word ‘Picaro’, which means a “rogue”, or “knave”. A Picaresque novel is a story undertaking the adventures or misadventures of a Picaro or who wanders from one country to another, from one setting to another, from the town to the country, from one inn to another and in this way the novelist gets an opportunity of introducing a variety of characters and incidents, of painting society as a whole realistically. The picture may be satiric but the aim of the novelist is to delight and entertain, and not to reform or improve.

Thackeray’s Vanity Fair has a strong, well marked element of the picaresque. It has a number of characteristics of the picaresque novel. First, its central figure, Becky Sharp, is a rogue and a villain. As David Cecil puts it, “she is not a lamb but a wolf, artful, bold, and unscrupulous”. She is an orphan with no parents, or other friends and relatives to look after her. Early in life, she is left unprovided and uncared for to shift for herself. She is an adventuress who uses her wits to make her way in life, and the novel is a study of her adventures and her vicissitudes as she passes through various scenes, meets with various incidents, and comes in contact with a great variety of characters.

The canvas is over-crowded with character and incident. The incidents and adventures which befall Becky or in which she is involved are thrilling, sensational, and melodramatic, characters from all strata of society have been introduced, and in this way a comprehensive and realistic picture of contemporary Victorian society has been presented.

However, it should be noted first, that the plot of the novel is not loose and incoherent as is the case with a picaresque novel. There might be a little superfluity and confusion here and there, but on the whole the novel has a coherent, unified structure. Secondly, it should also be noted that unlike the writer of a picaresque novel, Thackeray is not entirely concerned with moral issues. His intentions are moral. He is a moral satirist, and his aim in the novel is to expose and ridicule the false values and idols of Vanity Fair.

Further, the novel has a vastness and variety of setting which characterizes a picaresque romance, and which is almost epical in its range and sweep. The novelist has provided an international backdrop to the adventures of his central figure. The action moves from London to the countryside, from the house of the Sedleys’ to Queen’s Crawley in Hampshire, and from Hampshire to Brighton. From Brighton the scene shifts to Paris, then to Brussels, and a number of other towns of Europe including Pumpernickel. In the background, there is India Boggeywala and Madras. The roar of cannons is heard, Napoleon and Duke of Wellington stand behind and the whole panorama of the Napoleonic wars passes before the mind’s eye. The amplitude of the setting gives the characters all the room they want to move about.

Emphasizing the close affinity of the novel with a picaresque romance, E.M.W. Tilyard writes. “Vanity Fair, even if much nobler, is the logical heir of Barry London, which it succeeded in time”. Becky and Rawdon are both adventurers and for a while they join in preying on society. In every other way they differ. And this diversity-in-likeness gives the novel its own richness as well as its master motive.

The picaresque story is a genuine literary kind because it is based on a permanent tendency of human nature; the tendency to sympathize with anti-social behaviour while knowing that it cannot go on forever. The careers of Rawdon and Becky furnish a superb example of this. We want Becky to win her gambles, until Rawdon develops a human affection and the beginning of a moral sense. Then we waver, and Rawdon becomes the successful agent of a transfer of feelings; then we sympathize with him rather than with Becky.

There is also a good deal of support for the adventures of Becky and Rawdon. There are other adventures besides these two. Old Osborne is the successful adventurer in business; the self-made man. Jos Sedley, timid as he is, adventures to money in India. Young Osborne is the adventurer among the aristocrats who fill in the commissions in the British Most of the character are or have been on the make and unite to give the novel its special character. The disinterestedness of Amelia and Dobbin is a smaller affair and serves as a foil rather than forms the main substance.

We may sum up in the words of Tilyard,

“There can be no question of Vanity Fair’s being an epic: it remains the superlative picaresque romance.”