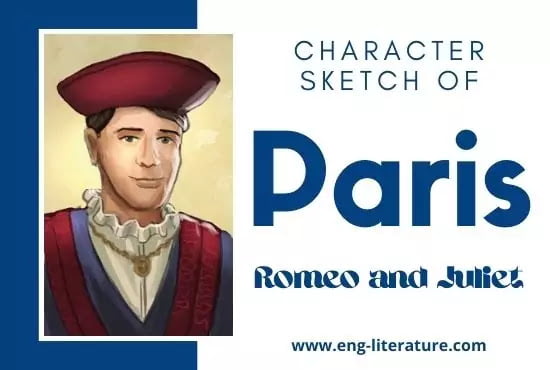 Like Benvolio Paris is briefly sketched. The rich and young Count Paris is a kinsman of Escalus, the Prince of Verona. He is noble, polite and sincere. He is the person with whom Lord and Lady Capulet want Juliet to marry. We are first introduced to Paris in Act I, Scene II, when he asks Lord Capulet if he can marry Juliet, even though she is not fourteen yet.

His Role in the Play

Paris is a suitor for the hand of Juliet. He talks to Lord Capulet about his marriage with her. Lord Capulet invites him to a feast and advises him to examine the merits of all the young girls present there. He does not discard the proposal of Paris says that Juliet is too young for marriage. Capulet has accepted the secret marriage of Juliet with Romeo, we find Capulet and Lady Capulet discussing with the arrangements of marriage. We find him, later on, lamenting the false death of Juliet

O woe ! thy canopy is dust and stones-

Which with sweet water nightly I will dew”

The grief is insincere. He is not ardent towards Juliet. We see him, for the last time at the tomb of Juliet. He is strewing the tomb with flowers. There he is engaged in a fight with Romeo and is killed. He is more than the branch of a tree that Romeo pushes aside. We are touched by his visit to the tomb and his death. He requests Romeo to be laid beside Juliet.

Paris is noble, tender and sincere. Lady Capulet speaks about him :

“Verona’s summer hath not such a flower.”