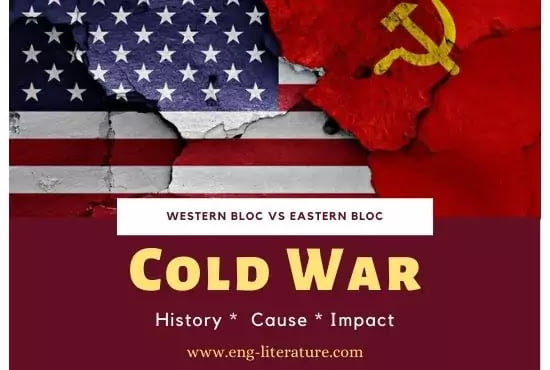 The Cold War is the term used to describe the extreme political unfriendliness that existed from the end of World War II to the late eighties between groups of communist and non-communist countries. On one side were the USSR and its communist allies, known as the Eastern Bloc, and on the other side were the Western powers of the USA and its allies.

There was mutual suspicion, distrust and misunderstanding between the two blocs. The USA and its allies felt that the USSR’s aim of spreading communism throughout the world threatened their security. The Soviets, on the other hand, accused the USA of practising imperialism and of attempting to stop revolutionary activities in other nations. Each bloc had its own political ideals which were diametrically opposed to the other.

Soon after World War II, the two great blocs were formed and the Cold War began. It intensified during the 1940s and the 1950s, and reached its peak in the 1960s. World peace was severely threatened. The arms race began afresh with both sides experimenting with nuclear weapons. At the same time, there was a space race between the USA and the USSR: the world watched in astonishment as the Americans and the Soviets tried to outdo each other in conquering space. By the seventies, both sides began to recognise the dangers involved in recklessly amassing powerful weapons that could wipe out large cities and populations in minutes. In the eighties, many efforts were made to improve relations between the two superpowers.

Most historians agree that the Cold War began after the Yalta Conference. The Big Three-President Franklin D Roosevelt of the USA, Premier Joseph Stalin of the USSR and Prime Minister Winston Churchill of Great Britain-met at Yalta (in modern day Ukraine) in February 1945 to plan for the peace that would follow the war. Stalin would not cooperate with the other leaders regarding the peacetime programme. Great Britain joined the USA in criticising the USSR’s plan to spread communism in Eastern Europe. During 1945 and 1946, the USSR broke off all contacts between the West and the occupied territories of Eastern Europe. In March 1946, Churchill warned that an ‘Iron Curtain‘ had descended across the continent. (The phrase ‘Iron Curtain’ became a popular expression to refer to communist barriers against the West.)

In the 1940s, the arms race between the two blocs began and continued into the 1950s. The Berlin Wall was a symbol of the confrontation between the two blocs. In the sixties, the world came dangerously close to a nuclear war. An attempt was made in the seventies to improve relations between the USA and the USSR. The Cold War took a fresh turn in the eighties when Mikhail Gorbachev took over the leadership of the USSR. ‘Glasnost’ (openness) and “perestroika” (reconstruction) were the terms which came to be associated with the campaign of Gorbachev to reform the economic and political machinery of the USSR.

Great Britain, as one of the countries belonging to the Western Bloc, had to support the USA in any action that the latter took against the USSR. Britain had to pay a high price for the Cold War. She had to face very high military expenditure and there was uneasiness in the minds of the British that they were playing second fiddle to the USA. In the seventies, Britain’s role as Washington’s partner was reduced due to her economic deterioration.

When Margaret Thatcher became the Prime Minister in 1979, she paved the way for an economic revival and sought to avoid any public conflict with the USA. Through her personal friendship with President Reagan of the USA, she was able to make Britain’s position more respectable. Up to 1982-83, Thatcher continued to repeat the anti-Soviet rhetoric of the Reagan administration. She was known as the ‘Iron Lady in the USSR’. After she was re-elected in 1983, she changed her approach. The British government began to establish contacts with the Warsaw Pact countries. (The Warsaw Pact was a treaty signed by the communist nations of Europe that were under Soviet military command. They were Albania, Bulgaria. Czechoslovakia, East Germany, Hungary, Poland and Romania), First, Thatcher paid a visit to Hungary and later she went to Moscow.

Thatcher pursued her characteristic policy of supporting the USA while at the same time wishing to safeguard British and European interests. In 1984, she made a visit to the USA and secured the Camp David pacts which said that the USA would not seek nuclear superiority over the Soviet Union. The USA agreed to maintain the balance between the superpowers. Gorbachev stopped over in Britain before going to Washington for one of his summit meetings with President Reagan. The Soviet Union believed that Thatcher exercised influence over Reagan through her personal friendship. In 1987, Reagan and Gorbachev signed an arms treaty agreeing to eliminate all medium-range missiles in both nations. Thatcher played a major role in the negotiations leading to the signing of this treaty. President Reagan spoke of a ‘fresh start in East-West relations.

The breaking of the Berlin Wall in 1989 was a symbolic act which signaled the end of bitterness between the power blocs. The Cold War became a thing of the past with the disintegration of the Soviet Union in 1991.