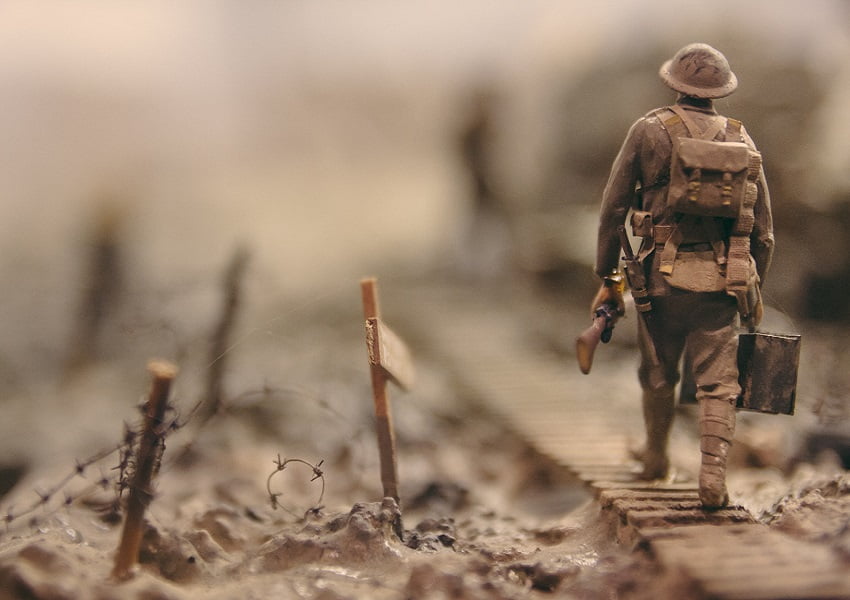 World War I, the war that was originally expected to be “over by Christmas,” dragged on for four years with a grim brutality brought on by the dawn of trench warfare and advanced weapons, including chemical weapons. The horrors of that conflict altered the world for decades – and writers reflected that shifted outlook in their work. As Virginia Woolf would later write,

“Then suddenly, like a chasm in a smooth road, the war came.”

Among the first to document the “chasm” of the war were soldiers themselves. At first, idealism persisted as leaders glorified young soldiers marching off for the good of the country. English poet Rupert Brooke, after enlisting in Britain’s Royal Navy, wrote a series of patriotic sonnets, including “The Soldier,” As time wore on, the war’s relentless horrors spawned darker reflections. Some, like English poet Wilfred Owen, saw it their duty to reflect the grim reality of the war in their work.

As Owen would write, “All a poet today can do is warn. That is why the true poet must be truthful.” In “Anthem for the Doomed Youth,” Owen describes soldiers who “die as cattle” and the “monstrous anger of the guns.” His poetry includes “Strange Meeting”, “Futility” “Anthem for Doomed Youth”, “Dulce Et Decorum Est”

In one of the most famous works set during the “Great War,” American writer Ernest Hemingway offers a gripping love story between a soldier and a nurse set against the chaotic, stark backdrop of World War I. A Farewell to Arms is among the writer’s most autobiographical: Hemingway himself served as an ambulance driver during the war was severely wounded on the Austro-Italian front and had been sent to a hospital in Milan, where he fell in love with a nurse.

The disillusionment that grew out of the war contributed to the emergence of modernism, a genre which broke with traditional ways of writing, discarded romantic views of nature and focused on the interior world of characters. Woolf’s novel (Mrs. Dalloway) reflected this emerging tone, as did the works of Joseph Conrad (Heart of Darkness) and James Joyce (Ulysses). T.S. Eliot’s “The Waste Land,” considered to be one of the most significant poems of the 20th century, presents a haunting vision of postwar society. Aldous Huxley’s dystopian novel Brave New World questions once-accepted social and moral notions in presenting a nightmarish vision of the future.

World War I devastated continents, leaving some 10 million soldiers and 7 million civilians dead. But writers responded with profound and groundbreaking work as they and the rest of the world grappled with the war’s upheaval.