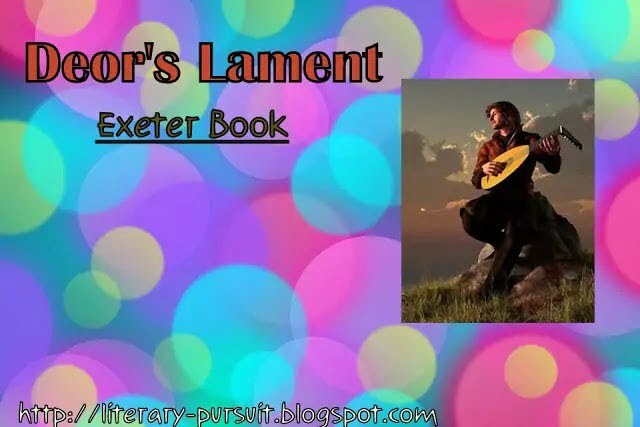 “Deor’s Lament“, one of the precious gems of Anglo-Saxon literature is found to employ a refrain and stanza pattern quite artistically. It was found in the Exeter Book which has been dated to around 960-990 AD. The poem might, of course, be older than the book itself, as many ancient poems were passed down orally.

Many critics and scholars have found it difficult to put “Deor” in a specific genre. Some call it a lament, an elegy, or even a “begging poem”, meaning that it was written by an itinerant begging poet without an official place in a court. There are, however, some similarities between “Deor” and two of the other poems in Exeter Book, “The Seafarer” and “The Wanderer”.

It is a moving elegy of forty two lines which gives voice to the suffering of a minstrel or a scop who has been replaced by a rival after years of service to his Lord. The speaker’s self consolation takes a meditative form as he looks back upon five instances of suffering inflicted upon Germanic heroes. The characters employed here are all from historical or mythical figures.

In the first stanza, the narrator emphasizes Weyland’s physical suffering. King Nithuthr enslaved him for fashioning beautiful golden rings. Being escaped Weland took revenge by killing Nithuthr’s two sons and getting his daughter Beadohild pregnant. The second stanza focuses on Beadohild’s spiritual and cognitive pang. After being raped by the killer of his brothers she found herself pregnant. At first she was completely broken down but afterward she managed to overcome her situation. In the third stanza, the narrator mentions the brief and ambiguous affair between the unfamiliar lovers Geat and Maethild. Losing Maethild, Geat has no hope to survive in the world, but somehow gets over it. The fourth stanza is all about the tyrannical rule of Theoderic over Maeringaburg for thirty years. Then he was alienated from people. He had been suffering powerlessness. Eventually he got over his misery. The fifth stanza highlights the relationship between Ermanaric, the king of Ostrogoths and his warriors. In fact he suffered misfortune being separated from his people. His black days also passed away.

In the concluding stanza, Deor, by comparing his present state of mind to the legendary figures confirms a moral message. No matter how deep and grim a man’s sorrow is, it will surely pass one day. Deor lost everything that was dear to him – his lord, his position- and now he is experiencing woe. However, he knows that his pain will pass.

“Deor’s Lament” reaches great heights of personal feelings which along with the expressive melancholy of the elegy give rise to a strong lyrical appeal. Deor’s lament is not just purely personal but also universal. Like a true elegy of the Anglo-Saxon Era it stresses on loss, exile and lamentation along with the belief in the fragility of earthly pleasures. This elegy is unique owing to it strophic form and the use of the constant refrain:

“That passed away; and this also may.”