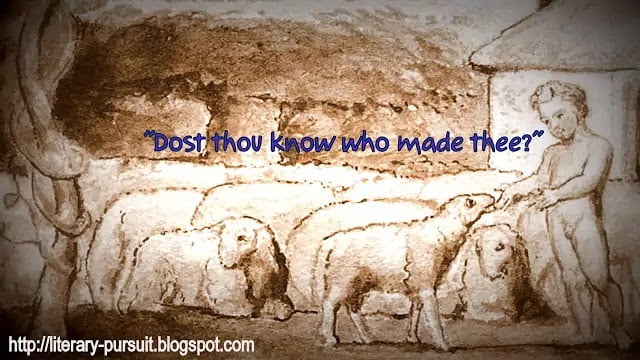 Blake’s Mysticism and Symbolism in The Lamb

William Blake was an extraordinary literary genius in the Age of Transition. He often used to say that ‘only imagination is real’ and that his task as a poet was to ‘open the mortal eyes of man inwards into the worlds of thought.’ His visionary quality and his use of myth and mysticism made his more profound works so complicated for ordinary men’s understanding that he remained unknown so long as he lived.

As a hardcore mystic, Blake in his boyhood days saw bright angels standing in a tree by the roadside. In his manhood, the earth and the air seemed to him full of spiritual presences. His imagination could not summon at any moment before him “armies of angels that soar, legions of demons that lurk.” In his intense mysticism he visualizes the entire world as a spiritual and symbolical verities:

“To see a world in a grain of sand,

And a heaven in a wild flower,

Hold infinity in the palm of your hand

And Eternity in an hour.”

“The Lamb” is an emblematic poem of Songs of Innocence, a collection of Blake’s poems which give us glimpse of the ideal world free from the deadening influence of the social customs, selfishness or jealousy which assails the mind of man as he grows up. In this poem there are two characters – a child and a lamb. The child is the speaker and he lamb is the listener. The child asks several questions to the lamb expecting replies from it. This question-answer technique lends a dramatic touch to the poem.

Being struck with wonder at the beauty, innocence, meekness and mildness of a lamb an innocent child out of his naivety asks it if it knows who its Creator, giver of its food, beautiful fleece and charming and joyful voice. He does not contemplate child in the manner of Wordsworth, Hugo and Longfellow; he actually goes straight into their souls speaks through their own mouths. The grave meaning comes out when the child remarks:

“I, a child and thou a lamb

We are called by His name.”

These lines finely expose that all the creations are manifestations of Godhead. The child and the lamb are unified with God and the quality that links them together is innocence. Thus God, lamb and the child form a holy Trinity. The child harbours no evil thought. His mind is not polluted by any selfishness, envy, corruption. Blake frankly states “God is Man and exists in us and we in him…Imagination is the Divine Body in every man.” In the world of creation nothing is trivial even the a little lamb occupies a grand value.

A fundamental question comes out from here, if the mundane things are created by someone else why not our natural world including air, water, earth and the animals? Mystics can give the answer in a ready way that behind every origination there must have been a source. Blake through the enthusiastic mind of the child seeks to answer those.

How does the lamb symbolize innocence?

Nobody acquainted with Blake’s poetry will deny that symbolism has large role to play in it. The present poem is no exception.  Symbols are largely drawn from the Bible. Unlike the tiger which stands for power, wildness, and cruelty, represents innocence, simplicity and joy.  The child is also the symbol of love, innocence, sympathy and instinctive wisdom. God in the same way acts as a symbol of the Good Shepherd under whose supervision both the lamb and the child can enjoy such delight, security and peace.

Furthermore the child and the lamb represent two very important phases of Christ’s life – Incarnation and Redemption. In the stage of Incarnation, God came to earth in the body of Jesus Christ. In the child we witness the existence of both divine and human nature. In the age of Redemption Christ underwent self sacrifice to deliver mankind from sin. In the lamb we can see similar kind of sacrifice.

Blake expresses his mystical thoughts through symbols. Like Shelley he uses the object of nature as symbols to suggest the spiritual reality that lies behind the appearance.