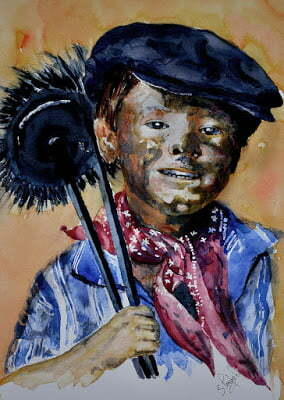 The poem “The Chimney Sweeper” is set against the dark background of child labour, a crude horror of the Industrial Revolution that was well known in England in the late 18th century. The poems (Chimney Sweeper in Innocence and Experience) are meant to convey two different views of human life, the view of innocence and the view of experience. Here we see the naturalistic world of childhood against the world of corruption. Blake writes these poems to let the reader knows that many kid’s lives are being exploited in the cities of England. He expresses his disgust about the plight of the majority of the chimney sweepers and how the society and church turn a blind eye of their sufferings. In the society they live in, innocent children are in anguish because of the harsh treatment of the adult population.

The “first poem” highlights the life of Tom Dacre, a chimney sweeper who is born to a world of abject poverty.  His mother is dead. His father sold him as a chimney sweeper, making him little more than a slave. Yet this boy still manages the type of optimism. Here is an immense contrast between the death, weeping, exploitations and oppression that Tom Dacre endures and his childlike innocence that enables him to be native about his grave situation and the widespread injustice in society. Tom Dacre’s imagination takes him on a lovely journey with his ultimate hope of being nurtured and cared for by his Father in Heaven. Despite the sadness of this poem a hint of hope still lingers. The same cannot be said of “The Chimney Sweeper” in Songs of Experience. The boy was abandoned by his hypocritical parents to die as a chimney sweeper while they go to church to pray.

The symbolism and pictorial beauty is textured by the warp and woof.  Tom’s hair is described as “curl’d like a lamb’s back”. A lamb is a common symbol of innocence and is one that Blake uses often in Songs of Innocence. While comforting Tom, the narrator says now “the soot cannot spoil your white hair”. The narrator is saying that the horridness of their situation cannot taint Tom’s purity and innocence as a child. However, by having his head shaved, Tom’s innocence is symbolically forcibly stolen. “Coffins of black” symbolizes their death in the chimney. Through their deaths, the boys actually regain their innocence because they become “naked & white,” which are symbols of purity and innocence. A line that rings of experience is “They clothed me in the clothes of death”. This child is acknowledging that he is going to die soon.

The poem ends with the sentiment, “If all do their duty, they need not fear harm”.  Even though they both are living terrible existences, there is still hope in death. They want an Angel to come save them and bring them to green pastures where everything will be perfect. His faith in God is so strong that it becomes his only constant source of hope and inspiration. The optimistic outlook, which is real to Tom, is revealed to be unrealistic on earth.

William Blake’s two Chimney Sweeper poems from the Songs of Innocence and Songs of Experience show a progression in the awareness of a young chimney-sweeper, from an innocent child clouded by childhood euphoria to a mature one whose awareness of his own life reveals a stark contrast between the privileged and the downtrodden. The first provides a lingering sense of hope. Tom and his friends can look forward to being at peace in heaven even though the hope of death is disturbing. The second does no such thing. Instead, it depicts a child whose innocence was stolen and replaced with experience.