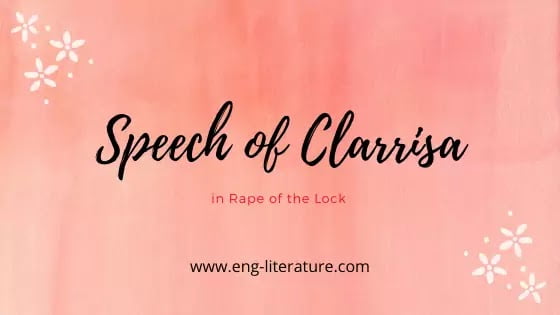 When Belinda bewails her lot and curses herself for having come to the Hampton Court despite all the ‘omens’, the grave Clarissa, in a neat little speech exhorts her to moderation and good sense. She points out that all feminine vanities and foibles are in efficacious against death. A beautiful woman may win the praise and adoration of males, wear splendid dress, dance all night, attend theatres, where she is the target of many furtive glances and bows from side-boxes and so on. But vain are all these unless good sense is added to beauty, unless men can say about the woman –‘Behold the first in virtue as in face’.

It is not possible to prevent small-pox, which is the scourge of beauty or chase old age away by dancing and dressing all night and day. Therefore, since beauty is subject to decay and locks of hair will turn white and ‘she who scorns a man, must die a maid’, it is better to take things in good grace and good humour. Clarissa exhorts Belinda to show good sense and win the souls of men, instead of indulging in airs, screams and recriminations.

Pope’s note on Clarissa and her speech runs thus-“A new character introduced in the subsequent editions to open more clearly the moral of the poem, in a parody of the speech of Sarpedon to Glaucus in Homer.” The speech strikes a sad and serious note that runs as undercurrent throughout the whole poem – fragility of feminine beauty and hence the utter worthlessness of feminine pride and vanity. After all it is virtue that counts and ‘the first in virtue is the first in face’.

This is a bit of moral advice that the grave lady offers to Belinda to open her eyes and make her calm. After all women must marry if they want to be happy and she who scorns a man, must die a maid. Pride and ill-humour cannot win suits. The inevitability of death is the commonplace maxim in the speech of the epic hero Sarpedon and the modern woman of fashion. It is the supreme truth of all times and this binds together all civilizations into a link.

Thus the speech, as a critic has pointed out,

“complicates our response to the satire of the poem. We see that as well as satirising a world Pope also celebrates and mourns it. It is complications of this sort that takes The Rape of the Lock beyond the range of Le Lutrin into the region of great poetry.”

2 thoughts on “Summarise the speech of Clarissa in Canto V, Rape of the Lock and it’s significance”