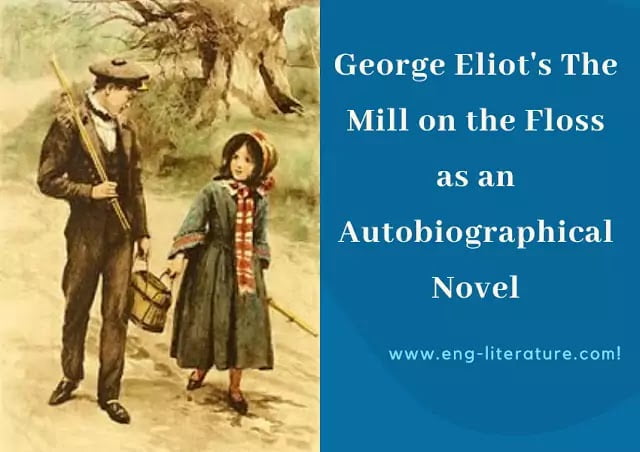 The ripest fruit of George Eliot’s artistic genius The Mill on the Floss — has been regarded by many critics as the most autobiographical novel of the authoress. They argue that the heroine of the novel, Maggie Tulliver, is, in fact, the fictional ego of Marry Ann Evans (George Eliot). W.R. Nicolle goes to the extent of saying:

“So long as George Eliot is read, wise readers will turn to “The Mill on the Floss” as the best, the truest and the most authoritative account of her own complex character”.

“That Maggie is essentially identical with the young Marry Ann Evans we all know.”

Yet the novel cannot be termed as an autobiography is the strict sense of the term for it does not project the life of my author in its entirety. We may find the life of the protagonist, Maggie, coinciding in some respects with that of Eliot, but is not sufficient to call the novel wholly autobiographical, as F. R. Leavis believes. The fact is that this identification is soul in ideas than in physical aspects.

The glimpses of Eliot’s early life can be found jubilant, exciting and thrilling childhood of Maggie in the company of her brother Tom. Tom, to some critics, image of Eliot’s brother Issac. Mr. Tulliver has borrowed from her father Robert Evans. Like Maggie, Eliot too was an unmanageable child who often became the butt of criticism due to her carelessness in dress and address. Just like Maggie, Eliot did have an adventure with the gypsies. In the delineation of Lucy’s character, she remembered her own sister Christiana who, contrary to Eliot, was neat and pretty. This resemblance is sounder in nature, habits, liking and disliking of Maggie and Eliot.

However, the only sound incidental identification between Maggie and Eliot is in respect of Stephen-Maggie affair. Just as Maggie had a scandal with Stephen, Eliot had the same with Lewes with whom she kept living for twenty-four years without having any regular marriage. Both were socially disreputed and excommunicated. Both were innocent and had fallen a prey to the fossil conventions of the society. Maggie did not commit any immoral act and Eliot’s resolution to live with Lewes was based on human values and laws of human heart. Since Lewes’ wife had deserted him, Eliot thought he had a right to establish relation with some other woman.

The scandals of both Eliot and Maggie led to their alienation from their brothers Isaac and Tom respectively. Eliot lived with Lewes till his death whereas Maggie was made to renounce Stephen, her love and met an accidental death. But this involves Eliot’s moral scheme. Though she had a scandalous life with Lewes, but she never approved of such a life and she punished her women for even the slightest moral lapse. Because she knew that deviation from social conventions leads lo devastation and annihilation. When one meets social death, one dies forever.

Then Maggie’s spiritual conflicts are identical with that of Eliot. George Eliot externalised her mental trauma by transmitting it to Maggie. Eliot too, like Maggie, was torn between duty and desire, between doubt and belief. Eliot was not dogmatic because orthodox Christian beliefs did not satisfy her inquisitive nature. She wanted to analyse everything on the bases of intellect. On the other hand, she had a profound sense of the immanence of God. This gave rise to a strong spiritual conflict in her mind which led her to the accusation agnosticism. Bust she was not agnostic. In fact, she never reached the certitude of belief.

Maggie too underwent the throes of this spiritual conflict. She was torn between duty and love. She loved Stephen passionately but at the same time she was morally bound by her duty towards Philip and Lucy. This conflict ultimately claims her life.

Maggie was an imaginative and sensuous girl who wanted to enjoy all the beauties scattered around her. But at the same time she was also prone to self-sacrifice by nature and placed before her the ideal of renunciation and self-denial. It was because of this ideal that when she had to choose between a life of passionate love with Stephen and her duty to her family and position, she chose the latter. Thus through Maggie, Eliot has given vent to her own convictions because Eliot too believed in the absoluteness of duty. Eliot denounced self-dominance and Maggie was self-sacrificing.

The environment in which both Maggie and Eliot were born was not conducive for their intellectual satisfaction. Both were ahead of their time. Eliot’s intellectual potentialities were too much for the environment around her to develop them. Similarly, Maggie’s potentialities weakened in discouraging circumstances. She had thirst for knowledge but poverty never gave her way to progress. The mental cuteness, the clinging affectionateness, the ambitious nature, the thirst for knowledge, the love of music etc. are the traits of Maggie which speaks the very soul of Eliot.

As the identification is predominantly in thoughts and convictions etc. the critics prefer to call the novel a spiritual autobiography through which we can peep into the very soul of Mary Ann Evans.