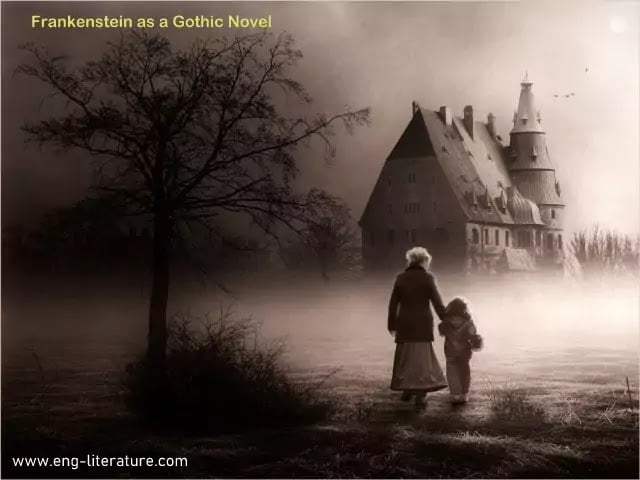 Frankenstein as a Gothic Novel

According to Wheeler the ‘gothic’ was a pejorative term “used to denigrate objects, people, and attitudes deemed barbarous, grotesque, coarse, crude, formless, tasteless, primitive, savage, and ignorant”. In terms of literature, gothic referred to a type of fiction characterised by gloomy setting, supernatural events, villains, mystery, suspense and other tropes. Mary Shelley’s Frankenstein is by no means the first Gothic novel. Instead, this novel is a compilation of Romantic and Gothic element combined into a singular work with an unforgettable story. It is the outcome of a dream that the 19 years old novelist experienced.

The first Gothic horror novel was The Castle of Otranto by Walpole, published in 1754. Perhaps the last type of novel in this Emily Bronte’s Wuthering Heights, published in 1847. In between 1847, several other novels appeared using the Gothic horror central story telling device, The Mysteries of Udolpho (1794) and (1794) by Ann Radcliffe, The Monk (1796) by Matthew G. Melmouth, The Wanderer (1820) by Charles Maturin, Dracula(1897), by Bram Stoker.

The fine settings within the novel are striking and distinctively Gothic. Spooky castles, ominous portents, mystery, and suspense: these are all elements of a Gothic novel. Appropriately, the creature first breathes on a “dreary night of November.” Victor creates his monster in a remote laboratory at Ingolstadt, while the second “monster” is begun in a desolate area of Scotland. Elizabeth is killed on a stormy night, the perfect time for a dramatic murder. The supernatural event, Frankenstein‘s creation is one element the author utilizes to support the Gothic genre. The setting around the creation creates an ominous mood.

Additionally, the monster‘s birth results in Shelley’s use of another element of the Gothic genre, Victor’s overwrought emotion. The rain and absence of tight are metaphors for sorrow and distress; the metonymies further the cheerlessness of the conception scene. The ominous dream, a common component of Gothic novels, serves as a presage of the monster’s savage homicide of Victor’s true love. November, a bleak and gloomy month, marks the beginning of wintry weather, a time of isolation and cold–the rain pattered dismally against the panes, and the candle was nearly burnt out Victor dreams that he saw Elizabeth, in the bloom of health, walking. “I embraced her, but as I imprinted the first kiss on her lips, they begin livid with the hue of death?” The supernatural event, portent dream, overwrought emotion and metonymy of gloom and horror combine to create the haunting and poignant tale that is Frankenstein.

Furthermore, the dark setting and the paranormal being are gothic elements that are used by the author to launch fear. The gothic theme of ugliness is dominant in the novel. In Frankenstein, the creature is described as ugly and hideous in appearance:

“his eyes, if eyes they may be called, were fixed on me. His jaws opened, and he muttered some inarticulate sounds, while a grin wrinkled his cheeks”

Another feature of Gothic fiction present in the novel is darkness. The atmosphere of obscurity and doom is dominant in Frankenstein. In chapter five, Victor is surrounded by darkness and rain. He is forced to escape due to heavy rain and ambiguity. He says:

“I felt impelled to hurry on, although wetted by the rain which poured from a black and comfortless sky”

Furthermore, the wet setting, pervaded by the utmost darkness, heralds the doom of the protagonist: “I foresaw obscurely that I was destined to become the most wretched of human beings”. The author uses wet and stormy weather, darkness and obscurity, which are elements from the Gothic fiction, to increase the suspense for readers and to arrange the appearance of the creature.

Haunting is a crucial element in the plot. Jerrold E. Hogle states that “the hauntings associated with the Gothic often arise from the antiquated settings”. Victor is chased by his modern achievement in antiquated and sublime landscapes like the Arctic and the isolated island.

Also, far away places that seem mysterious to the readers function as part of the Gothic novel‘s setting, Frankenstein is set in continental Europe, specifically Switzerland and Germany, where many of Shelley’s readers had not been. Further, the incorporation of the chase scenes through the Arctic regions takes us even further from England into regions unexplored by most readers.

Bridge between Mortal and Supernatural World

In the Gothic novel, the characters seem to bridge the mortal world and Supernatural world, Dracula lives as both a normal person and as the undead, moving easily between both worlds to accomplish his aims. Likewise, the monster seems to have some sort communication between himself and his creator, because the monster appears wherever Victor goes. The monster also moves with am superhuman speed with Victor matching him in the chase towards the North Pole. Thus, Mary Shelley combines several ingredients to create memorable novel in the Gothic tradition.

Finally, the Gothic takes the theme of death in an interesting direction overcoming the limits of mortality is a major concern. On a certain level, Victor’s interest in creating life is an extension of this desire to escape death. By assembling the body parts of the dead, Victor makes a “monster” who is part human and part ghost. Like a tormented spirit, his creation haunts the living.

Though Mary Shelley’s Frankenstein, written in the early 19th century, certainly contains many components of a Gothic novel, it cannot be correctly grouped under that genre. Shelley employs various literary devices to support the elements, a supernatural event, portent dream, overwrought emotion, and metonymy of gloom, which classify Frankenstein as a Gothic novel.