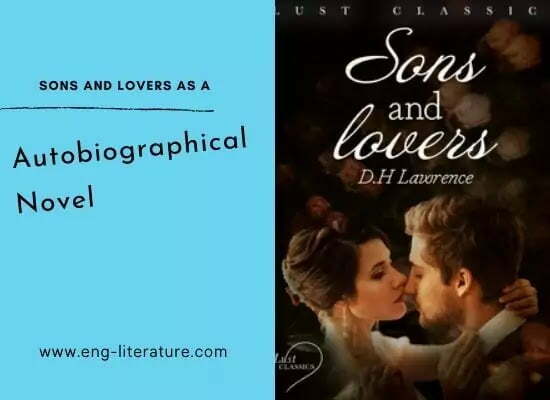 Sons and Lovers as an Autobiographical Novel

Autobiographical novel is primarily comprised of made up events and characters that may be based on the author’s own experience and self. The protagonist might be modeled after the author and do at least some of the things the author has actually done in his or her life. Sons and Lovers is an autobiographical novel, much of which is taken from Lawrence’s own early life in the midland coal-mining village of Eastwood. The experience of Lawrence and Paul overlaps a lot.

The autobiographical setting of Bestwood has a close resemblance with Eastwood, the place here Lawrence grew up as a child. Lawrence was born at a mining village in Nottinghamshire. In the novel, Lawrence also showed us the pen picture of coal-miners’ life in the English Midlands according to his life experience. His father, a coal miner with little education was a heavy drunkard. The miners did terrible hard labour in the dark and damp pits day and night, thus they risked their life. They became rough and peremptory gradually. Only the wine can make them forget their distress and fatigue temporarily. They ill-treated their wives and children. Meanwhile, their wives brought up children in the narrow and small houses. The thousands of the coal miners’ wives had the same predicament as Gertrude’s(Paul’s mother).

It was the very social background that caused the family conflicts of the Morel couple which stands similar to the Lawrence couple, Arthur and Lydia, Paul’s parents. They had a short period of happiness after their marriage, but the poverty, the hard labour and the low level of education destroyed her beautiful dream. Paul’s father got alcoholic. But his mother, once a school teacher was from a somewhat higher class, who came to think that she had married beneath her, and desired to raise the cultural level of her sons so as to help them escape from the life of coal miners. The conflict between the earthy and coarse, energetic but often drunk father and the refined, strong-willed and up-climbing mother is vividly presented in Sons and Lovers.

There is close resemblance of Lawrence’s girlfriend of Nottingham high School, Jessie Chambers with that of Paul’s beloved Miriam in Sons and Lovers. As a student Lawrence was very intelligent and smart. Jessie was reserved and shy with him, because she felt inferior to him. The Chambers family was impressed Lawrence’s knowledge of literature and philosophy. Lawrence cared for Jessie very deeply, but he didn’t feel any attraction for her. His relationship with Jessie fluctuated between love and hate.

After Paul’s broken relationship with Jessie, he began another one with Louie Burrows in the last days of his mother’s life. His mother died on December 10, 1910; Lawrence was ill and grief-stricken for moths. Prior to his mother’s death, Lawrence started to write Sons and Lovers, which he called Paul Morel first. Sons and Lovers is his most autobiographical novel –  Lawrence drew upon his own memories and experiences to write the story of Paul Morel.

Paul bears a very clear and close resemblance with his own creator.  Like Paul, Lawrence was also a weak and sickly boy and he was brought very close to his mother by a serious attack of pneumonia. The persistent atmosphere of disharmony and the regular bickering of the parents had lain a great strain of Lawrence. Like Paul, Lawrence too was an introvert and shrank from life. He too had fits of depression and melancholy and a nameless horror filled his souls.

2 thoughts on “Sons and Lovers as an Autobiographical Novel”