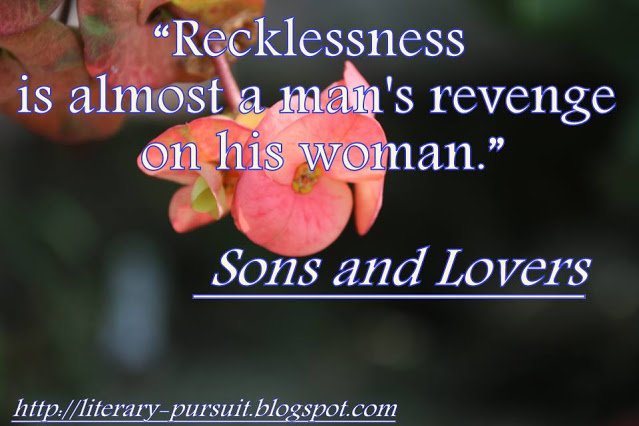 Sons and Lovers as a novel of Oedipus Complex

The concept of Oedipal love is a scientific theory about human nature propounded by Austrian neurologist, Sigmund Freud. According to Freudian Theory it is a manifestation of sexual desire of son for mother and conflict with the father. Freud derives this theory from the story of King Oedipus of Thebes who unknowingly married his own mother and had children by her. This problem of Oedipal love in Sons and Loves is very subtle and puzzling. Now the questions always trouble everyone, whether this love relation between son and mother is of Oedipal in nature or not? Or whether this kind of love is possible or not?

Let us examine how the love relationship between the mother and son develops. Mrs. Gertrude Morel who is married to Mr. Walter Morel is deeply dissatisfied with her husband. Mr. Morel is neither intellectual nor has any moral or religious feeling. Besides he is a hardcore drunkard. There is a clash and temperamental difference between the two. Although they live together physically but they are poles apart in emotional ground. Mrs. Morel is emotionally broken. It was the matter of chance that their third child was coming. This child is not the result of any love between the two. Mrs. Morel thinks that she must love it with all her affections when it is born, because the child is the result of hatred of wife for the husband. So she decides to love it more than all her children. A male child takes birth. He is weak, tender and delicate, so the mother needs to care this child. Here at this point starts the growth of emotional love between mother and son.

The mother has begun to influence the soul and conscience of the child. She has deliberately trained her children to hate their father. All children are horrified with their father. They all hate him but Paul hates him most. He wishes “Lord it would be better that my father dies.”, but at the sane time he is confused, feels guilty and says “Let him not die in the pit.”

The elder brother is too older to become the playmate of Paul and younger brother is too younger to play with him. Annie and mother remain in the family. But Annie keeps herself busy in books and in her friends. Ultimately there remains mother who cares for her son, Paul.

Lawrence presents the relationship between the son and the mother in the novel poetically. He lives in mother and mother lives in him on the emotional ground. Paul goes to school and for the whole day she keeps on waiting and waiting. She dreams of his son would be well-established. She does not want that Paul should join his father’s job in mines.

Paul comes out from the four walls of family when she gets a job at the family of Jordans. And when he meets Miriam, he experiences the close intimacy of some other woman besides his mom. But his mother also wants to possess his soul. Here his mother’s excessive command and her hold on his temperament and emotion existence become a terrible impediment or stumbling block. Paul and Miriam love each other passionately. But his mother does not permit him to love Miriam. His mother feels that this Miriam is too dangerous for her son. But when Paul comes in contact with Clara, she does not suspect as Clara is a married lady. But Paul becomes disillusioned with Clara. He felt dreary and hopeless between Clara and Miriam.

Paul feels that his mother is destroying him unconsciously. So, he hated her for sometime but he could not liberate himself from the strangulating effect of his mother and find himself hopeless. Anguish and agony, pain and love go together in his life. But when his mother falls ill, he increases the dose of morphin to liberate her from her painful life. At the time of her death he whispers again and again, “My love, my love.” Now mother is dead but Paul is not happy. He finds himself in more complexities. To Paul the real world looses the charms of his life. He begins to realise that there is nothing meaningful in this world. Like Hamlet – “Man delights me not”, he is not delighted by the world. Such was the influence of his mother on his consciousness.

Now the big question arises, would you consider this love between son and mother an Oedipal love or not?  A crude scrutiny reveals that Mrs. Morel’s possessive love is based only on emotional plain. This love has no physical implication. Mother loves son because she wants to love her husband which she doesn’t get. She has a love hungry heart. In order to get emotional gratification she loves his son, Paul a bit too much. The love is Oedipal on its emotional ground.

Mark Spilika dwells at length on the nature of three kinds of love represented by Paul’s mother and his two sweethearts – Miriam and Clara. He labels them as ‘Oedipal’, ‘Spiritual’ and ‘Unbalanced possessive’. He calls all these three kinds of love – ‘counterfeit love’.

Paul without realising it, fights for his soul. He ultimately feels oppressed by their love and at last gathers enough courage to reject them from his soul. It has been the very hell of his struggle and has led him to near breakdown. At the end of the novel Paul emerges as a new man with courage and determination to face the life with all its terrors and mysteries.