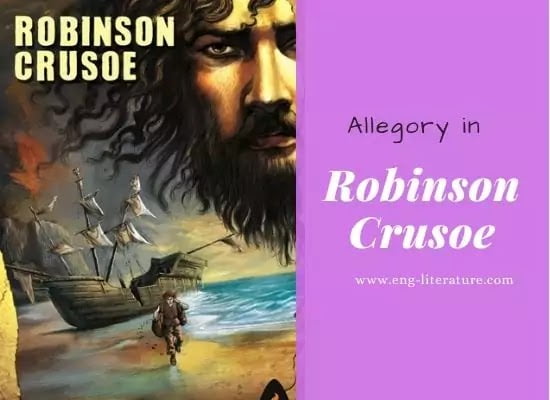 Robinson Crusoe as an Allegory

An allegory is a narrative piece of art in which the authors use their characters, setting and plot to entertain by delivering moral lessons. Allegories were popular in England from the sixteenth century onward Robinson Crusoe is regarded as one of the finest allegories. Defoe must have been inspired by the allegories of Spenser’s The Faerie Queene, Milton’s Paradise Lost. But the real inspiration behind Robinson Crusoe is undoubtedly Bunyan’s The Pilgrim’s Progress, another class allegory.

In both the novels, The Pilgrim’s Progress and Robinson Crusoe life has been treated as a voyage of human soul. Life in both these novels is a probation. In the Pilgrim’s Progress a pilgrim, who is the human soul, makes his progress towards the House Beautiful. Likewise Robinson makes his voyage on sea, the Bhav Sagar, which must lead him towards his destination – the spiritual salvation.

G. H. Mair, while praising Robinson Crusoe and exalting it above The Pilgrim’s Progress writes :

“The Pilgrim’s Progress is begun as an allegory, and so continues for a little space till the story takes hold of the author….But the autobiographical form of fiction in its highest art is the creation of Defoe.”

F. B. Millet searches close resemblance between the life of Defoe and that of Robinson. He says that Defoe is a master of the art of taking and keeping the point of view of his hero. He seems to abdicate his rights as an author to allow his hero to possess him. He throws himself completely into the situation of Crusoe, wrecked on the island. He foresees the dangers and takes measures of precaution against them.

Generally the allegorical novels are the autobiographical by nature. Dickens in David Copperfield, Great Expectations writes about his own miserable life, as a childhood. Defoe writes his own life in Robinson Crusoe. Defoe had led a miserable struggling life. In the course of activities he was imprisoned and was even pilloried. And while he was in jail his wife and children starved. We can relate his imprisonment with Robinson’s imprisonment on the solitary island. The starvation of his family is expressed in the following lines :

“I had a dreadful deliverance. For I was wet, had no cloths to shift me, nor anything either to eat or drink to comfort me, neither did I see any prospect before me but that of perishing with hunger.” (Robinson Crusoe)

Life has been treated as a voyage. That is why Robinson must suffer from wander-thirst. Defoe sees in the life of Robinson his spiritual development and salvation. He had often, like Francis Bacon, played sometimes acting for both the Whigs and the Tories simultaneously.

Robinson commits the disobedience to his father and God. He also commits the sin of pride, sin of rising faster in life than the nature of things allows, and the sin of running away from the island of imprisonment. Defoe had suffered punishment, tortures and humiliation. This we can read in the life of Robinson. He is also punished with slavery, with imprisonment and fear on the island. He is made to fear the footprint, the dream in which a man descends from the cloud to kill him with a spear and the Cannibals who feast on human flesh. Above all he is tormented by loneliness on the desolate island. He longs for the company of a human being. When he sees a shipwreck he is dejected not to find a single man alive :

“O that there had been one or two, or but one soul saved out of this ship.” (Robinson Crusoe)

The spiritual salvation of Defoe has been imagined in that of Robinson. Robinson prays to God to allow him to repent. He prays that his penitential tears, he sheds for Him, may be accepted. When he finds God magnanimously and mercifully spreading his table in the wilderness he feels that his tears have been accepted. He is now a restored penitent. He thanks God so making him an instrument for saving the soul of a cannibal, Friday. He thanks God to send him to the desolate island which becomes the place of his redemption. The place of dreadful afflictions becomes the place of ecstasy. He is fed as Elijah was fed by the ravens. He, like the Bishop of Canterbury in Eliot’s Murder in The Cathedral, mixes his will in the will of God.

Man has come to this world alone and he will depart one day from her comes empty-handed and goes empty-handed. Life is only an illusion. No one has any belonging to others. Life is Maya, a mirage. It slips from under our hands like sand. Ecstasy eludes here like horizon. True ecstasy can only be sought in the union with the Almighty. The island, the solitary island symbolises this loneliness, and our constant effort salvation.

This island also is an allegory of alienation. Apart from isolation man feels alienated. A person feels himself to be lone even amidst the crowd. We feel alienated because we find no one to share our ideas and feelings. Moreover, we feel lonely when we fall upon the thorns of life and bleed. Rarely does then anyone come to comfort us, to balm o sorrows. We feel that when we laugh the world laughs with us, but when we weep, we weep alone. The weeping of Robinson, the lonely weeping on the lonely, desolate island cannot be heard by anyone.

Defoe was a materialist. He was, like Bacon, practical and, like Locke, empiric. He indulged in fraud and dishonesty. He believed in amassing wealth. Robinson is another Defoe. Ian Watt calls him an economic individualist and Karl Marx in his Das Kapital regards him as a capitalist.

Robinson embarks on voyages not only for adventure but also for trade. He earns a lot of money in his first voyage to Guinea. He possesses, like Marlowe, an infinite immoderate passion for rising fast in life. On the island he brings from the stranded ship a lot of money which cannot buy even a pair of shoes. He bides his time for deliverance from almost the life imprisonment on the desolate only for collecting his material things. He goes mad and dizzy and almost like dying when he finds his wealth all around him.

The Britishers founded colonies in almost half the world including India. Robinson regards himself as the king of the island. Later when he revisits his island he claims half of the island as his personal property.

An allegory implies double layer of meaning – literal and inherent with symbolic interpretation. It is just like the innumerable waves formed when a stone is thrown into the water. Robinson Crusoe can be read on many levels. It can be read as an autobiographical story, as an adventurous story, as a picaresque novel, as a religious pilgrimage, as a parable of the Prodigal Son, as a moral treatise, as a conquest over Nature, as material advancement, as colonial expansion and as so many other things. Therefore Robinson Crusoe is a superb allegory.