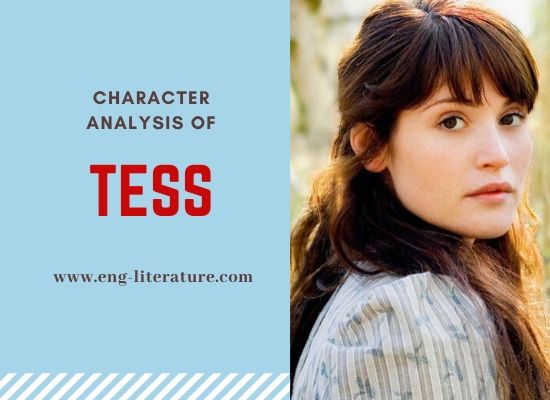 “Among Hardy’s woman Tess claims attention first, not only by reason of popularity, but more specially in that her creator distinguished her by the appellation of a pure woman”.

Tess is described early in the novel as a cute and handsome girl whose mobile mouth and large innocent eyes added eloquence to colour and shape. Phases of childhood lurked in her aspect still. When she meets Alec for the first time, her attractiveness of face and figure cause his eyes to rivet themselves on her. “It was a luxuriance of aspect, a fullness of growth, which made her appear more of a woman than she really was”. Angel Clare is also greatly attracted by her physical charms, her “real vitality” and her “real warmth”. He had seen nothing to equal the beauty of her mouth which, to any young man with least fire in him, would have been distracting, infatuating, maddening. Her lips and teeth could be compared to roses filled with snow. In spite of the “animalism,” however, Angel Clare finds something unearthly in her. On certain occasions Tess was no longer the milk-maid,

“but a visionary essence of woman a whole sex condensed into one typical form. He called her Artemis, Demeter add other fanciful names……..”

Contrast with Her Mother

Tess is not an illiterate girl. She has passed the sixth standard in the national school under a London-trained mistress, and she speaks two languages: the dialect at home, more or less; and ordinary English outside and to persons of quality. Although she has a tendency to believe in omens, she is not superstitious like her mother. She is considerably ahead of her mother as regards knowledge and outlook. Between Tess’s mother and Tess, says Hardy, there was a gap of two hundred years:

“when they were together, the Jacobean and the Victorian ages were juxtaposed”.

Tess : Her Devotion to Her Family

One of Tess’s most outstanding traits of character is her steadfast and unfaltering devotion to her family. She is keenly conscious of her duty as the eldest child in the family. She feels constantly solicitous throughout the story about the welfare of her brothers and sisters. In fact, Alec succeeds in exploiting Tess partly because of this trait in her character. His gifts to her parents and to her brothers and sisters both at the outset and at the later stages of the story produce in her a feeling of gratitude towards him which he does not fail to make use of for his own nefarious purpose. Tess’s sense of duty to her father and mother is as deep as her devotion to her brothers and sisters.

At the same time Tess is fully conscious of the weakness of both her father and her mother. She knows that her father is only making a fool of himself by feeling vain his ancient lineage, and she feels quite a Malthusian towards her moth thoughtlessly producing so many children. She is always ready to give financial help with the last penny she has got. When she receives the new her mother’s serious illness, she gives up her job at Flintcomb-Ash and back to Marlott to be by her mother’s side and remains with the family.

Tess is by nature a melancholy person. There is a morbid element in her thinking. When still a young girl, she tells her little brother Abraham that they are living, not on a splendid and sound planet, but on a blighted one, the evidence for this being that their father is generally ill and often gets too drunk to be able to attend to his work, and that their mother is “always washing and never getting finished”. And she says this before any real misfortune has descended upon the family, even before the accident in which Prince the horse gets killed. Angel Clare later on discovers this melancholy streak in her nature. Angel feels surprised to find in her a tendency to such “sad imaginings” and feelings which might almost have been called “the ache of modernism”. It seems strange to Angel that these feelings should have come to her while still so young. Referring to her “woebegone” look! Tess tells Angel,

“My life looks as if it had been wanted for want of chances. I feel what a nothing I am ! I’m like the poor Queen of Sheba who lived in the Bible. There is no more spirit in me”.

Tess‘s very initial reaction to Alec D’Urberville is one of strong dislike. She is repelled by his advances when he tries to kiss her while driving her to Trantridge. When working at Trantridge she constantly feels suspicious about his intentions and refuses to let him take any liberties with her. Her sexual experience with him in the wood has been called a rape. However, we must recognize the fact that she does acquiesce in what he does to her. The acquiescence should not be called a willing surrender. As she afterwards tells him, she hardly knew what was happening till it was too late.

The Marriage of Tess and Angel

Hardy’s women are usually led by love and passion. The fourth phase shows us Angel’s love becoming more and more intense, and Tess steadily refusing to agree to any commitment. Some more light is thrown on Angel who is intellectually admirable, and on Angel’s family. We also learn that Alec D’Urberville has met old Mr. Clare and spoken rudely to him. Tess‘s resistance to Angel’s pressure is maintained almost to the point of incredibility, but at last she consents to become “his for ever and ever”. Five times she has tried to tell him her secret, and five times she has failed. In the days that follow she lives “in spiritual latitudes more nearly approaching ecstasy than any other period of her life”. As they wander about enjoying the new freedom and openness of their love, Hardy continually points to the waiting terrors. The omens multiply, but the quiet wedding takes place; still the omens continue—the legendary death foreboding coach, the crowing cock, the fearsome D’Urberville portraits, and finally the news of Retty Priddles’s attempt to kill herself. The last blow compels Tess to a decision; she will tell Angel there and then.

Tess’s Confession and Its Consequence

And so we come to the most painful scene in the novel. Before Tess reveals her secret, Angel confesses a moral lapse on his part, and she forgives him readily. But he refuses to adopt a similar liberal attitude towards her guilt. This reminds us that the Victorians had one standard of judgment to men and another for women. Angel in this situation does not even show logical mind. He raises various objections. He says that Tess is not pure however, goes under the carpet and does not come into Angel’s hands. Subsequently when she makes a confession after the marriage, the reaction comes as a great shock to her. Life now loses all its meaning for her.

Deserted by Angel, Tess goes back to her family and, after a short stay with them, becomes a wage-earner at a place called Flintcomb-Ash. But her love for Angel does not diminish, and she has an inward faith that he will come to her. Her attempt to meet Angel’s parents proves futile. Her long wait for Angel’s return proves unrewarding. Her desperate letter to Angel brings no reply. Chance throws her again in Alec’s path, and her love for Angel into ashes. When Angel returns to her it is too late, but not too late for her murder Alec and enjoys a brief interlude of happiness in Angel’s arms before she is overtaken by the long arm of the law. Thus Tess proves herself to be woman with an exceptional capacity for love and for self-sacrifice. Tess is splendid woman, if ever there was one. In this peasant girl there is the stuff and the substance of which true heroines are made. Her love is of a sublime quality, and her death is a martyrdom in the cause of that love.

Tess: Her Heroic Endurance of Her Misfortunes

What makes Tess a truly tragic figure is her heroic endurance of her misfortunes. Her seduction early in the story is, of course, her greatest misfortune. Then comes the death of her baby aptly named “Sorrow”. The chapter describing Tess’s hasty baptism of the child, the child’s death, and its burial makes painful reading. Then comes the heart-rending episode of Angel’s desertion of her. At the end of her confession of her past she waits for Angel to speak words of comfort and good cheer to her but instead hears the following words. “The woman I have been loving is not you.” She bursts into a flood of self-sympathetic tears, but they have no effect on Angel. She is now overcome by a feeling of the injustice and cruelty that she has been subjected to. She wishes that she were dead. Then there follows for her a life of despair, hard toil, helplessness, and mental torture. One of the most painful chapters in the book describes Tess‘s work at the threshing-machine. Alecs importunities aggravate her affliction, and the eviction of the family from the cottage at Marlott comes as the final blow. Her brief stay at Sandbourne as Alec’s mistress is a shameful episode in her life, but her state of mind there one of stupor, as if she were heavily drugged. The wrecking of this sensitive girl’s happiness and the blighting of her hopes are unbearable for the reader but Tess endures her fate with a rare fortitude.

Tess : Her Gentle and Sympathetic Nature

Tess is ineffably gentle. She is by nature a sympathetic being. Herself in love with Angel, yet wants to allow an opportunity to the other milk-maids to try to cap Angel’s heart and even suggests to Angel that he should choose one of the rather than her. To the milk-maids she says: “He ought to marry one of you. You are all better than I.”

“She is high-strung, impressionable, poetic; her soul soars into space when she gazes at the night heavens, in the stress of her emotions at the sound of Clare’s harp the whole of the twilight garden grows instinct with harmony and passion, and at his touch her accelerated pulse drives the blood flushing to her finger-ends. She is heroic, for we hear of her many months of lonely self-chastisement, wrestling, communings, schemings to lead a future of austere isolation, and her long endurance of retributive agonies is sublime. And she shows perfect nobility and generosity of sentiment in her attitude towards her simple rivals at the farm and in her splendid faith in Clare. Whatever else we call her, Tess remains the most lovable of Hardy’s heroines. All women adore her, and some men. What she might have made of life, what life might have made of her, had circumstances and Clare been kind, is beyond dreaming.”