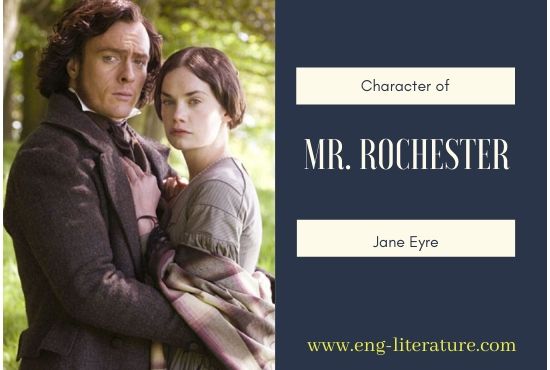 How is Mr. Rochester presented in Jane Eyre?

Mr. Edward Fairfax Rochester does not strike us as a very amiable man when we first meet him; and even afterwards we do not feel that he is adorable as a hero in a novel is generally expected to be. He is by no means a handsome man; and he is no longer young when he falls in love with a girl who is barely half his age. Thus we are likely to frown at the love-affair which develops between him and the eighteen-year-old Jane Eyre.

At the outset, he seems to us to be a serious-minded and harsh man with a sullen disposition. He has always treated his ward, Adele with kindness and generosity, and yet he often becomes impatient when she tries to talk to him freely. His initial conversations with Jane also show him to be a rather staid kind of man or a man who is all the time stiff and even inflexible.

There is another unpleasant aspect of his personality, and, in fact, this is an even more unpleasant aspect than his harsh nature and apparently unsocial attitude to life. This unpleasant feature of his character is the dissolute life which he has led in the past. He has had several amours or improper sexual relationships with women. Of course, he gives Jane enough reasons to justify his deviations from the code of social morality. But his account of his past love-affairs certainly leaves an unpleasant taste in our mouths.

Mr. Rochester’s Betrayal of Jane’s Trust in Him

Is Mr. Rochester a villain?

In one respect, he is likely to appear to most readers as almost a villain. He has hidden from every inmate of Thornfield Hall, with the sole exception of a maidservant of the name of Grace Poole, the fact that he is an already married man with a wife who is still alive and who is living in that very house in which he resides. His keeping this fact a secret from everybody is no offence, morally or legally. But he becomes guilty of a serious offence, both morally and legally, when he hides the fact of being already married from Jane with whom he has fallen ardently and passionately in love, and when, furthermore, he tries to marry once more and thus commit bigamy.

Is Mr. Rochester a sympathetic character?

All this shows the dark side of Mr. Rochester’s character. But he does have certain redeeming qualities. Beneath his harsh nature, is his capacity to laugh, to make others laugh, to make merry, to entertain people, and to perform acts of kindness. He is extraordinarily kind to Adele even though she is in no way related to him. He has a strong sense of humour, and he can make witty remarks. He keeps his guests amused by devising all sorts of entertainments for them such as charades. His sense of humour is also revealed to us by his assuming the disguise of an old gypsy woman to befool his guests.

His chief redeeming quality, however, is his passionate love for Jane, and his constancy in love. The whole world, they say, loves a lover. Mr. Rochester is an ardent lover who yearns for Jane even though he does not, for quite some time, let her know about the passion which is raging in his breast. It is when he proposes marriage to her that he shows his fervor in love. He tells her that he loves her as much he loves his own flesh; and he then urges her to say “yes” to his proposal without a moment’s delay. There is not only urgency in his proposal of marriage but an intensity of passion. Later, when the marriage ceremony has been abandoned, and when Jane has decided to quit Thornfield Hall, he appeals to her not to forsake him. But her mind is made up. He then entreats, implores her, and even threatens to use violence against her, all because he does not want to lose her. Thus, as a lover, he certainly earns our regard and esteem.

Mr. Rochester has been regarded by many critics as an “impossible” character, and we partly share this view. He has basically a jovial, almost gay, nature; but outwardly he assumes a look of harshness and even severity. He is an excellent singer, an excellent player on the piano, and an excellent entertainer, and yet his outward solemnity and gloom is a mask which he wears.

Mr. Rochester is a unique kind of man, as Jane Eyre is a unique kind of woman. A man, who is forty years old, has captured the heart and fancy of a girl who is only twenty years old. There must be indeed something fascinating about him. Edward Rochester belongs quite simply to the great family of Mirabeau (a French statesman), stormy, equivocal, powerful, and attractive.