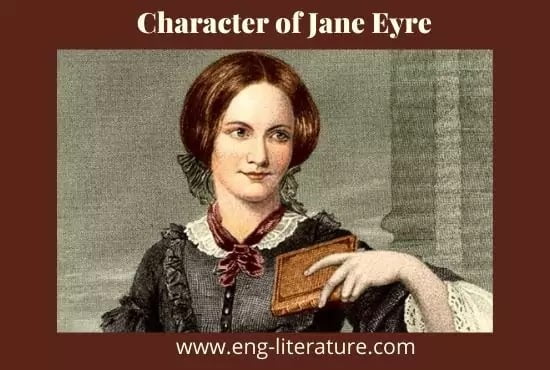 The portrayal of the heroine Jane Eyre is one of Charlotte Bronte’s greatest achievements in the arena of English fiction. Jane Eyre has been made to live before us in the pages of the novel; and the manner, in which an account of her life and her actions has been written by the author, would leave an indelible mark upon the mind of every reader.

The first trait of Jane Eyre’s character, which we note at the very outset and which she continues to display throughout her career, is her spirit of defiance and revolt. Jane Eyre, as a ten-year-old girl, rebels against Mrs. Reed’s cruel treatment of her. Subsequently, she has to endure the degradation and the humiliation to which she is subjected by Mr. Brocklehurst at Lowood School. She is in no position to defy the director of the school, but she begins to detest and abhor this man. At Thornfield Hall, she tells Mr. Rochester that he has no right to give her orders and commands just because he pays her a salary. At Moor House she refuses St. John’s repeated proposal of marriage and does not surrender to him despite the pressure which he exerts upon her.

Jane has a passionate nature; and, when she falls under the spell of Mr. Rochester’s magnetic personality, she becomes deeply devoted to him. Her love for him is so intense that he seems to her to be the most handsome man, even though he is, by his appearance, one of the most unattractive males. Here she aptly says to herself that beauty lies in the eyes of the gazer or the beholder. She finds Mr. Rochester to be a fascinating man, and her love for him becomes profound. Here we also perceive Jane’s unconventional attitude to life, not only because she has fallen in love with a physically unattractive man but because she has fallen in love with a man who is twice her age. Her love for him is not a passing fancy as would have been the case with a girl of a superficial nature. Her love has an abiding quality, and it continues even after she leaves Thornfield Hall and forsakes Mr. Rochester under the compulsions of her conscience. Eventually, of course, she is united with him, and finds perfect bliss in her conjugal life with him.

Jane Eyre’s Sense of the Dignity

“Do you think I am an automaton? — a machine without feelings? and can bear to have my morsel of bread snatched from my lips, and my drop of living water dashed from my cup? Do you think, because I am poor, obscure, plain, and little, I am soulless and heartless? You think wrong! — I have as much soul as you — and full as much heart! And if God had gifted me with some beauty and much wealth, I should have made it as hard for you to leave me, as it is now for me to leave you. I am not talking to you now through the medium of custom, conventionalities, nor even of mortal flesh: it is my spirit that addresses your spirit; just as if both had passed through the grave, and we stood at God’s feet, equal — as we are!”

When Mr. Rochester urges her not to forsake him but to live with him as his companion or his mistress, she declines this proposal and quits Thornfield Hall even though she has not ceased love Mr. Rochester. In taking this step, she appears to us as an upholder the dignity of her sex and as a champion of the rights of women.

Jane is basically a sympathetic person. In fact, she is large-hearted generous. Her friendship with Helen Burns at Lowood School is based on her sympathy for that girl who is the very embodiment of piety and humility. The manner, in which Jane distributes her legacy of twenty thousand pounds equally among her three cousins and herself, shows her generosity as well as her desire for family affections and attachments.

Jane goes through the vicissitudes of her life with great courage and fortitude. An ordinary girl would have given way to despair, and would have sunk beneath the weight of her misfortunes. An ordinary girl would certainly have succumbed to the temptation of living with Mr. Rochester as his mistress or subsequently, have agreed to marry St. John in order to lead a financially viable, if not prosperous, life. But she gives evidence of her extraordinary powers of endurance under all circumstances. She proves herself to be an enterprising girl capable of taking initiatives.

Emily Montegut, a critic has expressed the view that Jane Eyre, Rochester, and St. John River‘s are three characters drawn from human nature at its grandest. Superior to her sorry outward appearance, superior to her humiliating situation, and superior to the blows of fate, Jane is one of those women who are equal to all the vicissitudes of life. She loves only strength, energy, and freedom. Another critic describes Jane as one of the most unforgettable heroines of all times, adding that she is a penniless orphan of sharp wit and independent spirit, although outwardly of plain appearance.