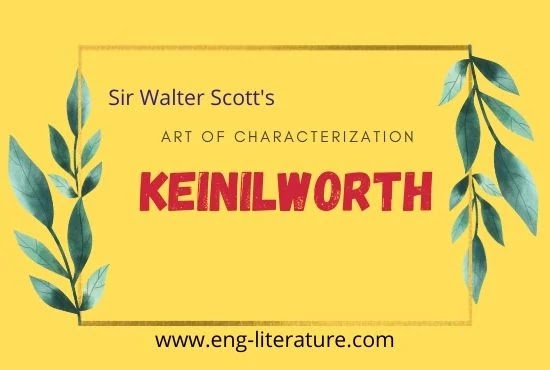 Art of Characterization in Kenilworth

Scott abandoned Fielding’s art of characterization. In Fielding, Jane Austen and Dickens we find a study of man’s conscience too. But in Scott the characterization is limited only to the external observation. Hence Scott remains moored to the surface. He does not examine his characters from within.

However, Scott makes his characters lively by the virtue of their vitality and extra embellishment. In his personages he displays a fecundity resembling that of nature itself, fecundity derived from his comprehensive acquaintanceship with all sorts and conditions of men.

Scott is an inspired, and exalted, pageant-master of enormous energy and sparing no expense, who organizes a procession through the ages, from the medieval to the nineteenth-century moment, in which every degree of humanity played a part, and wore the appropriate costume. He is a vast gallery of characters. He portrays kings and queens, outlaws and cut-throats, men of law and of war, girls and crones, witches and even ghosts. But his characters are shaped by a historic living. Some of them are moulded by the forces of religion and religious strife.

On the whole Scott appears a more consummate artist in the portrayal of male characters than those of women. Yet some of his heroines are wholly literary and remembered chiefly as poetic creations. Lucy Ashton, Jeanie Deans, Amy, and Queen Elizabeth are among such poetic creations.

In Kenilworth we find flat characters. Most of them are static : they do not change. Queen Elizabeth is a character who does not change. So are Giles Gosling, Anthony Foster, Janet, Tressilian. However, it is in his static characters that he has excelled more than in the dynamic characters.

Amy is the heroine of Kenilworth. She is simple and innocent creature she is more sinned against than sinning. She can be compared with Shakespeare’s heroines. She has been portrayed in a very lively manner. She is present in the novel from the beginning to the end. She is the pivot on whom the whole novel revolves.

The hero of the novel is not Dudley but Tressilian because Trasilian’s work appears to be more heroic than that of the Earl. The Earl Dudley is simply a cultured villain ; a serpent under flower.

Then we find the directly-drawn characters in Kenilworth, They are presented directly because they do not appear with a dramatic twist. They are what they are. They are not going to change in any circumstance. They differ in relation to the change in situation but in the essentials and fundamentals of their personality. Scott paints his characters hurriedly. Instead of describing their minds and soul, Scott is satisfied to describe their body and dress.

Scott’s characters are more individuals than types. In Kenilworth too, we have individual characters. There are some super-vital characters also. Sir Walter Raleigh is one of them. He is young, ambitious and daring. He is an Elizabethan gallant. He is a man of action. The extra daring on his part wins for him the esteem of the Queen Elizabeth. His thoughts as well as his movements are directed to a purposive end. He has been cut out by nature to rise in life. This character is different from other characters in matters of exuberance. Consciously he does not step on others to enhance his chances of further promotion. He is aided by the vagary of chance now and then.

In Kenilworth we find both the silent and voluble characters. The characters like Gosling, Michael Lambourne and Dick, the pedagogue talk too much, whereas Tony Foster, Amy Robsart, Tressilian, etc. talk too little.

Most of Scott’s characters are robust and have guts. Tressilian is the dashing character and the minor character, Dickie Sludge has plenty of guts. Scott portrays his characters with contrast and analogy. Amy has been drawn in contrast to Elizabeth ; Tressilian to Varney; the Earl of Sussex to the Earl of Leicester. Characters are developed not only with the help of conversations between the characters themselves, but also by the direct descriptions.

Kenilworth conceives characters in the spirit of romance rather than in that of a scientific novel. The doings of the characters have a shade of romance. Though the characters may be of historical reality yet they behave in a romantic manner. We are reminded of the saying of Somerset Maugham who states that the facts are poor story-tellers. We have to study them with the colouring of imagination. Some of them remain muffled in the cloak of secrecy, but secrecy does not hold long.