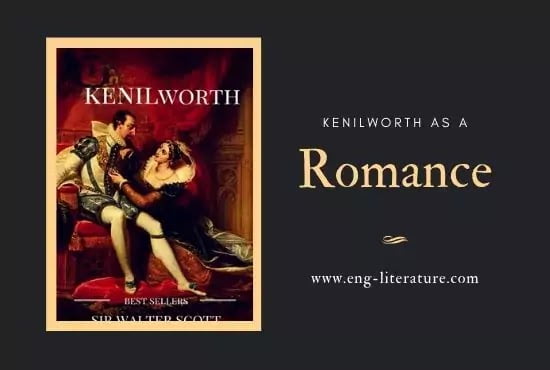 Scott’s romanticism lies in his rejection of the 18th century polite tradition and his attempt to write literature of and for far broader sections of the people. In contrast to the Gothic novelists, Scott does not write exclusively from the point of view of the ruling class. There is an escapist, romantic elements in almost all his books but in his best novels, Old Mortality, The Antiquary, The Heart of Midlothian, he makes a serious attempt to capture realistically the strains and tensions of a experiences of the Scottish people.

Kenilworth is a history; but it is a romance also. In action, in treatment of events and characters, in its setting and background it imitates the models of romances.

The novel begins with the romantic secrecy. The opening immediately reminds one of the fables where a few gallants proceed on an expedition of searching a lost lady, or a lover leaves home in search of his lady-love. In Kenilworth also, a lover goes out for the search of this beloved; and in the inn it appears that two gallants, Michael Lambourne and Tressilian take a journey for solving the mystery in the Cumnor Hall.

Kenilworth is filigree. It is embroidered with silver and gold – love and romance. Scott tries to romanticize everything with the help of imagination and poetic faculties which he received as the al gifts from the Muses. He changes history according to his own requirements: he can replace places; dates are of little significance for him. It matters little whether Amy died in 1560 or in 1575: but Scott’s interest is in showing how she died at a particular period and this how and why is solved by him with exquisite charm and dramatic turns.

The novel contains some aspects of the fable. Amy’s episode is a romance; the tricks of Alasco and Wayland Smith are also on the line of the fables. There are duels and fightings, and there are attempts of violence. Poisons are taken and given; elopements take place, and the villains also try to rape girls. A gallant like Walter Raleigh appears, and throws down his cloak in mud to facilitate the way for a beautiful lady so much renowned as Queen Elizabeth. The way in which the Earl of Leicester proposes for the hand of the Queen; and the way in which Wayland seeks his entry into the Cumnor Hall are also on the tradition of romances.

In design and pattern too, Kenilworth is fashioned on the fable. The events take place with a dramatic thud. Rich colours are there; and there are also high contrasts. The story gains its momentum not at the hand of history, but at the hand of romance. It is not queen and kings, nobles and courtiers, wars and fightings that draw the reader’s attention so much as the lovers and beloved, their love-making and efforts of winning one another.

Although Scott does not exploit the supernatural in the ordinary connotation, that is, he does not produce ghost and witches. But he tries to give his novel a mysterious atmosphere by his device of secrecy and intrigue. The role of Wayland Smith and Alasco are good substitutes for the supernatural of the table.

The element of romance can also be found in Scott’s descriptions of the various places where his main scenes take place. He chooses spots of considerable interests. The lonely and antique grandeur of Cumnor Place, the bustling life of Black Bear Inn, the magnificence of Kenilworth Castle, and the grandeur of Say’s Court Cumnor Place has been described with the passion of romance.

Similarly, Wayland’s lodging is a mean place, yet it has a supernatural charm. The Castle of Kenilworth has been coated with heavy descriptions. It has an ample porch, the battlements placed with the gigantic warders, with clubs, battle-axes; and other implements of ancient court life. The vizards and buskins can be seen there. The pageants, the tower, the small rooms, the gates are all imbued with a spirit of imagination. The inanimate things become animate for the time being.

Like all the Romantic writers, he loathed the new capitalism, seeing the Industrial Revolution as destroying the old social ties which made in the old society if not for equality at least for certain kindliness in human relationship.

“To Scott, as to Carlyle,” Professor Grierson has said in his admirable biography, “the main source of the evil was the divorce of any tie between the employer and the labourer but the cash nexus.”

However, Scott’s romanticism is not airy. It is coloured by a strong realistic sense. He is always led by the realism of the historian, but he also uses the imagination of a writer of the romances.