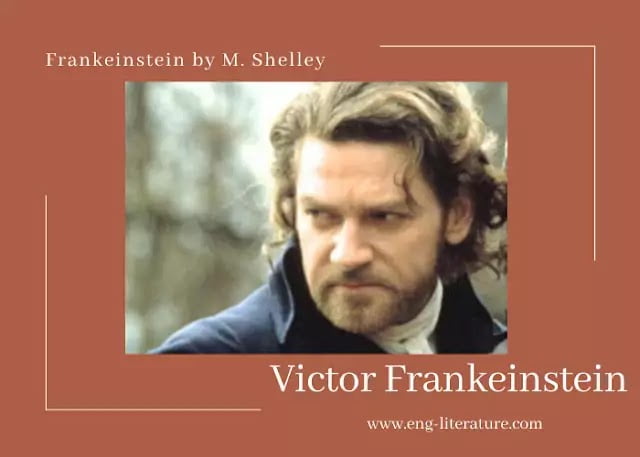 Undoubtedly, the creator of the monster is the protagonist of Mary Shelley’s gothic novel Frankenstein. The name “Victor” is derived from Paradise Lost by John Milton, a great influence on Shelley. Milton frequently refers to God as “the Victor” in Paradise Lost, and Shelley sees Victor as playing God by creating life. In addition to this, Shelley’s portrayal of the monster owes much to the character of Satan in Paradise Lost. Victor was also a pen name of Percy Shelley’s, as in the collection of poetry he wrote with his sister Elizabeth, Original Poetry by Victor and Cazire.

Victor : His Family and Childhood

Victor is the oldest son of Alphonse and Caroline Beaufort Frankenstein. Victor by birth is a Genevese, and his family is one of the most distinguished of that republic. Victor, was born in Naples, Italy. Victor was adored by his parents. Though Victor says that there can be no happier childhood than his, he confesses that he had a violent temper as a child. His temper was not directed at other people, however : it manifested itself as a passionate desire to learn the secrets of heaven and earth. His friend Clerval, by contrast, was fascinated by ques morality, heroism, and virtue.

Victor : His education and interest

Victor shares their desire to penetrate the secrets of nature, to search for the philosopher’s stone and the elixir of life. The quest for the that becomes his obsession. Though he acknowledges that such a discovery would bring one great wealth, what Victor really longs for is glory. Victor is also preoccupied with the question of how one might communicate with, or even raise, the dead. When he is seventeen, Victor‘s family decides to send him to the University of Ingolstadt, so that he might become worldlier. Victor develops a consuming interest in the structure of the human frame: he longs to determine what animates it, what constitutes “the principle of life.” Seized by a “supernatural enthusiasm,” he begins explore life by studying its inevitable counterpart: death.

On a chill night of November, Victor finally brings his creation to life. Victor’s creates a horrible Monster instead of a beautiful man. Upon the opening of the creature’s “dull yellow eye,” Victor feels violently ill, as though he has witnessed a great catastrophe. Though he had selected the creature’s parts because he considered them beautiful, the finished man is hideous : he has thin black lips, inhuman eyes, and a sallow skin through which one can see the pulsing work of his muscles, arteries, and veins. The beauty of Frankenstein‘s dream disappears soon.

Victor : His abandonment to the Monster

Victor becomes a victim of his own creation that hounds at every step. Even though Victor abandons his own creation, the creation does not abandon him. In Victor‘s discarding his own creation, there is a double edged critique of William Godwin’s concept of Utopia, where children would be produced by what he calls social engineering and rules out the need of sexual intercourse between man and woman as well as Mary Shelley’s criticism of parental neglect.

Shelley’s novel Frankenstein also reveals the flaws of human character as depicted in the character of Victor Frankenstein.  It revealed man’s tendency to become arrogant and to act like God when he already knows so much.  When Victor assented to the monster that he will create him a partner, he already assumed to have God like capabilities with what he knows about science.  As it was wrong in the beginning, a series of tragedy followed with Victor’s bride Elizabeth being murdered by the monster during their wedding night.  He became filled with revenge as what the monster was; that he became preoccupied about chasing the monster to avenge Elizabeth Lavenza’s death.

At the end of the novel, having chased his creation ever northward, Victor relates his story to Robert Walton and then dies. Even as he is dying, he will not admit fully to his mistakes and the reader is left wondering whether it is Victor who is the true monster.

Like the monster he has created, Victor is an isolated individual. His alienation from society is self-imposed. However, his ambition leads him to become arrogant and extremely single-minded. He neglects his family and friends, abandons his creation and fails to take responsibility for his actions which leads to the deaths of many of those who should be near and dear to him.

Is he a hero or villain?

Now here a big billion question lies how would we regard Frankenstein – as a hero or as a villain? Surely Frankenstein is the most misunderstood character in the whole arena of English literature.

Frankenstein cannot be properly categorized as a hero. Although he does possess some heroic qualities, he is not a perfect hero. A hero should be selfless, a characteristic that Frankenstein lacks. For example, when Justine is charged with the death of William, Victor Frankenstein’s younger brother, Frankenstein believes that the true murderer is himself as he is convinced that his creature killed William and therefore Frankenstein feels guilty for William’s death. Frankenstein claims that he would rather take the blame than allow innocent Justine to take the blame. Frankenstein never vouches for Justine.

At the same time, Frankenstein cannot correctly be considered a villain. Even though he is selfish, he also exhibits concern and care for his family and friends. His love for his family is displayed through his actions and words. To be more specific, when his family is mourning the death of his brother and he is traveling back to his home in Geneva, he describes his desire to “console and sympathize with my loved and sorrowing friends”.

Since Frankenstein cannot justifiably be declared as either a hero or villain, he would be classified as an anti-hero. In addition, Frankenstein demonstrates qualities that anti-heroes possess. Anti-heroes are social outcasts, a trait that Frankenstein has convinced us he has obtained. While Frankenstein does care about his family and has a friend, his social circle does not really extend beyond them. The creation of his monster itself also demonstrates his anti-hero qualities, specifically the rebellious quality.

Victor is presented to us as the Promethean rebel, the seeker of knowledge, and this in itself, may be laudable. His sin seems to be an attempt to usurp the role of God in creating life and his refusal to take responsibility for what he creates. If he suffers, he suffers for his daring and trespass. It catapults his mind inexorably into misery, remorse, agony and anguish.