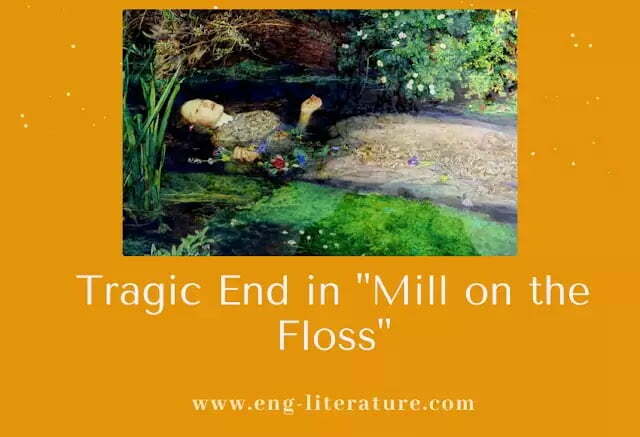 The end of The Mill on the Floss is the most controversial issue of the novel, which has given rise to elaborate studies by various critics. It has been subjected to some scathing criticism because it is alleged to be capricious, arbitrary, unnatural and abrupt. Bulwer-Lytton observes that the end is inadequately prepared. To Henry James, the end is defective and shocking and it might have been an afterthought on Eliot’s part. Leslie Stephen calls the end “pathetic” and says that it affects general harmony. F.R. Leavis opines that Eliot has distorted the end in order to give it a typical Victorian dramatic ending. Joan Bennet is of the view that the end indicates the novelist’s desire to bring about a sort of poetic Justice. W. J. Harvey regrets that the end is a structural defect and it undermines the moral scheme of the novel. Critics blame that the end does not appear to be inevitable; it seems abrupt and imposed. Eliot cut the knot she was unable to unravel. The end does not flow from incidents.

Though the end may have some defects yet it can be promptly defended and justified on the following grounds:

Firstly, the end can be justified at the allegorical level. The novel is, in fact, written in the retrospect. Living in 1850s Eliot portrayed the life of 1830s, characterized by its simplicity and purity, which was no longer there in Eliot’s age the short span of twenty years, it was greatly affect urbanization and materialism and lost its purity. The Tullivers stand for that pure life of 1830s. Through the extermination of the Tullivers, she wanted to show the extinction of an epoch the era which was lost — and introduced new material which she did through Wakem who is the representative of materialistic age. So far as Mrs. Tulliver is concerned, she is good for nothing fellow.

At the allegorical level, the end also suggests that lack of harmony in human personality is fatal. Maggie was torn between two extremes – impulsiveness and a strong sense of duty. Some critics observe that Maggie should have been given an opportunity to make a moral choice. But, in fact, the conflict of her mind had become so intense that she could not go either way. Her impulsiveness persuaded her to marry Stephen but her sense of duty asked her to be faithful to Philip and Lucy. If she married Philip, she would be disloyal to her family. So she had to pay for the disharmony in her personality through death.

Some critics observe that in spite of being drowned in the Floss, Maggie could have been killed by some other way, but it is wrong. If Maggie and Stephan had drowned during boating, it could not have been convincing enough. Had Tom killed Maggie, it would have been against the theme of the novel, i.e., emotional self-control and it would have been cheap sensational novel. Had Maggie committed suicide, she would have been reduced to the status of a foolish sentiment girl which Eliot did not like. Natural death would have been least artistic. Eliot also wanted to bring about reconciliation between the brother and the sister before death, which would have been impossible in normal circumstances. So it was most suitable way for Maggie’s death which Eliot contrived. Then at the symbolic level too Eliot wanted to show that Floss which gave birth to whole of Maggie’s miseries, itself put an end to all her sufferings. The flood, in fact, proved baptismal for her.

Like Fielding, Eliot wrote with a definite purpose, i.e., to inculcate moral into the people. Maggie sacrificed the virtues of Christian charity for the sake of the impulses of the flesh. Through Maggie’s death, Eliot wanted to teach that the love of the flesh was socially as well as morally explosive and led to the valley of death.

Like Jane Austen, Eliot, too, does not set up fanciful ideals in her novels. She wants to instruct that when ideal is lost, the penalty is death. Maggie wanted to be at the same time dutiful and true to her love, which was a fanciful ideal. It did break and she met a tragic death.

From the personal point of view to the end can be easily defended. Eliot had a scandalous life with Lewes for about twenty four years. But she never approved of such a life. Her conscience always pricked her. Therefore, she never allowed her women characters to repeat such a lapse and punished them even for the slightest slip. Maggie had biographical resemblances with Eliot. Through pushing her, she, in fact, pushed herself. She did in the novel what she could not do in real life.

The end of Mill on the Floss is equally defendable at the social level. Eliot wanted to communicate that when one is socially disrupted and humiliated, it is impossible for one to live a happy and respectable life in the society. Maggie had to meet death for she had already socially died.

Lastly, we may justify the end from the structural point view. In fact, Eliot’s conception of unity is different from other novelists. In Eliot’s case, complex relationship is responsible for creating unity. She creates relations which are complex as well as interdependent and the complexity of these constructs the unity of her novels. But after creating such complex relationship, she is usually unable to unravel and resolve it because it becomes inextricable. Then she cuts the unable to unravel. She involved Maggie in inextricable relationship with Tom, Philip, Lucy, and Stephen to invest the novel a unity. But when she found herself at a loss to resolve it, she achieved her object through the death of Maggie, for, after all, had to reach its tragic end.

From what has been stated above, we may reach the conclusion that the bitter criticism with reference to the end of the novel, The Mill on the Floss is quite unqualified. In fact, the end seems apt and justified when viewed in the backdrop of the whole scheme conceived by George Eliot.