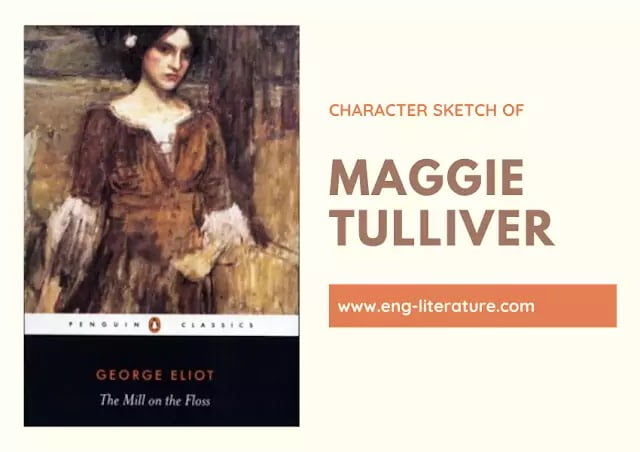 The realm of English literature Eliot has contributed some immortal figures who have become stuck to the memory of the readers of her novels. Maggie Tulliver, among these unforgettable characters, stands supreme Maggie is the protagonist of The Mill on the Floss. The novel tracks Maggie as she grows from an impetuous, clever child into a striking unconventional young woman. Thus the panorama of Maggie‘s life is set before us as a child, as a little girl and as a grown up woman. We are made fully acquainted with the basic traits in Maggie’s character.

When the novel begins, Maggie is presented to us as a clever and impetuous child. Through Maggie, Eliot very beautifully analyses the working of children’s mind and the basic springs of their actions. It is her study of child psychology which brings her in tune with such modern psychological novelists like James Joyce and Virginia Woolf.

Eliot presents Maggie as more imaginative and interesting than the rest of her family and sympathetically in need of love. She loves her brother Tom intensely and desires his whole attention, but Tom by virtue of his nature does not understand her. Actually, both of them are poles apart is embodiment of rationality and self-righteousness Maggie is all love and generosity.

Yet Maggie‘s passionate preoccupations also cause pain for others. Maggie‘s mother and aunts continually express disapproval with Maggie‘s rash behaviour, uncanny intelligence and unnaturally dark skin, hair and eyes. Yes it is only Tom’s opinion for which Maggie cares and his inability to show her unconditional love, along with his embarrassment at her impetuosity often plunges Maggie into the utter despair particular to immaturity. At one of these occasions when Tom pays more attention to Lucy, his cousin, Maggie becomes infuriated and pushes Lucy into mud. Frightful of the consequences of this rash act Maggie runs away to gypsies and is ultimately brought home in a very miserable condition. At another occasion when her mother and aunts criticise her for being untidy she goes into her attic and cuts her hair and spoils her doll. But soon she realises her mistake, repents and weeps bitterly. All these incidents show her impulsive and sentimental nature right from her childhood.

Actually, Maggie has an imaginative mind, full of rosy ideas about life. However, when she finds the world inimical to her dreams, she becomes frustrated. But Tom being a practical man does not appreciate these ideas. It is this lack of intellectual communion which drifts her closer to Philip, the son of her father’s enemy and Tom’s class-fellow. Philip satisfies her intellectual thirst and this develops intimacy among them.

“You are so very clever, Philip and you can play and sing, she added quickly. I wish you were my brother I’m very fond of you.”

Maggie: Inspired by a Book

The most important event of Maggie‘s young life encounter with a book of Thomas a Kempis’s writings during the difficult year of her adolescence and her family bankruptcy. Looking for a “key” with which to understand her unhappy lot, Maggie seizes upon Kempis’s writings and begins leading a life of deprivation and penance. Yet even in this lifestyle, Maggie paradoxically practices her humility with natural passion and pride. It is only until she re-establishes a friendship with Philip Wakem. As Maggie continues to meet Philip Wakem Secretly, against her father’s wishes, her internal struggle seems to shift.

The final books of The Mill on the Floss feature Maggie at the age of nineteen. She seems older than her years and is described as newly sensuous – she is tall with full lips, a full torso and arms, and a crown of jet black hair. Thus, from an ugly duckling she turns into a swan. Maggie‘s worldliness and lack of social pretension make her seem even more charming to St. Ogg’s, as her worn clothing seem compliment her beauty. Maggie has been often unhappy in young adulthood. Having given up her early asceticism, longs for a richness of life that is unavailable to her. Actually the trait that was most marked in her all through life was “the absolute need of some one person who should be all in all to her, and to whom she should be all in all.”

When Maggie meets Stephen Guest, Lucy Deane’s handsome suitor, she feels this wont for sensuousness fulfilled for the first time. Stephen plays into Maggie‘s romantic expectations of life and gratifies her pride. Maggie and Stephen’s attraction seems to exist more in physical gestures than in witty discussion, and it seems to intoxicate them both. Circumstances throw them together and Maggie, with Stephen remains away from St. Ogg’s for a few days.

Some critics condemn the whole episode of Maggie. Stephen affair and argue that how is it possible that a Maggie like cultured and sensitive girl could be attracted towards a man like Stephen. But we should not lose the sight of the fact that Maggie is a human being and she errs like humans. Stephen has sexual attraction and Maggie was unable to resist the temptation.

Again, it was her sense of duty and love for Tom that she went out during flood to save his life. However, both were drowned “in an embrace never to be parted”. Thus “in their death they were not divided.”

Summing up his scholarly discussion of the novel, Walter Allen comments:

“What gives the novel its ultimate greatness is George Eliot’s rendering of the character of Maggie…… Maggie is the unifying principle of the novel, its centre of consciousness. I do not think it at all necessary for readers of novels to identify themselves with characters in them; but I believe it is impossible to read The Mill on the Floss without identifying with Maggie. She is as deeply felt a character as any in fiction and she exists, in her aspirations and the frustration of them, as a permanent criticism of the quality of ordinary life anywhere and in any age”.