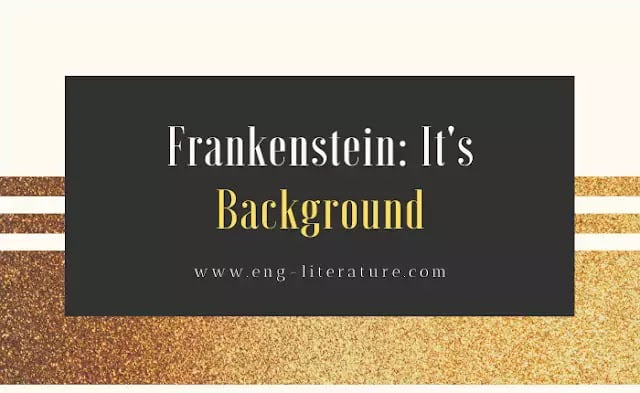 Marry Shelley’s Frankenstein is a unique novel in the canon of English literature. The novel seeks to find the answers to questions that no doubt perplexed Mary Shelley and the readers of her time. Mary Shelley presents a unique character in Victor Frankenstein and his creation, the monster.

Marry Shelley also is keenly aware of the concern that technology was advancing at a rate that dizzied the mind of early 18th century readers. Perhaps this novel is addressing that issue of advances created by men, but which fly in the face of “natural” elements and divine plans. Mary Shelley crafts her exquisite novel in a way to direct attention to the treatment of the poor and uneducated as a major theme throughout the book. She would have learned these precepts from her father William Godwin, a noted writer and philosopher.

The American and French Revolutions

To understand Shelley’s time period, one must delve into the period that preceded Shelley’s. Mary was born in 1797, after the American and French Revolutions. Europe was a tense place for fear of potential political revolutions during much of the period from 1770-1800. The English upper class feared that the French Revolution might spill over to their country. Many felt that change was necessary to ensure equality among the masses. The wars that Napoleon waged, begun in 1805, essentially quashed any real hope of building a better Europe. However, the seeds of discord were sown for the dissolution of social and class barriers in England and mainland Europe. The cries of “liberty, fraternity, and equality,” were left on the impressionable minds of men everywhere. It was thought that man could achieve greater personal liberty, without the threat of overbearing governments. Men also reasoned that brotherhood in a common cause whether it is social, class, or academic-would lead to a better country and a better government.

England benefited from being linked to Europe, but the English Channel served to slow the pace of the revolution that swept the European continent. English political and social institutions were keenly aware of the wave of feelings that revolution had created in France and the United States. Since English rule was now less dependent on the monarchy than before, the power structure of the United Kingdom was more widely distributed than her European counterparts. The balance that England achieved made for an uneasy peace at home. England was at war with France from 1793 to 1815.

The English government made deals with other monarchs in Prussia, Russia, and Austria to keep England from entering into any alliance that might compromise English control of the high seas. The result was criticism of English foreign policy at home by such liberal thinkers such as Lord Byron and Percy Shelley. Both of these men had seen the results of England’s turning the other cheek from the repression that they saw in Austria and Italy. Byron and Shelley felt that the Tory party in England had not done enough to ensure the freedom of the people at large and had essentially “gotten in bed” with the more conservative Austrians and Italians.

Rising of a New Social Class due to the Industrial Revolution

The Industrial Revolution also gave rise to a new European Society, the middle class. As more businesses moved from home or cottage-based operations, factories became the next place where conflict would be waged between the working poor and their employers. New towns sprang up with a new set of problems for local governments. Few checks and balances existed for factory owners or governments. As a result, town life was forbidding and dangerous. The countryside yielded little relief from city life, as small farmers had to make a living on small plots of land, in contrast to large landowners. Usually, the old gentries had ruled the land for many years previous, and they controlled the larger portions of land, thus regulating its use. The poor enjoyed a better standard of living than previously, but the concerns of the poor and the gap between the rich and poor became more pronounced during this period.

The Repression of the People at Home by the English Government

The English government repressed the people at home, fearing a latent revolution and fearing the liberals in the government who supported social and economic reforms. Mary Shelley writes about the ideal society where people aided each other and the less fortunate. Liberal-minded men would ensure that the conditions of those who labored on the farm or in the factory would be tolerable and fair. The Shelley’s, both Mary and Percy, adopted these ideas.

The proper treatment of the Frankenstein‘s housekeeper, Justine Moritz, is indicative of Mary’s own views of how the labouring class should be treated. Also, the whole De Lacey story line details the French government’s imprisonment and banishment, for unclear reasons, of a family who aided a Turkish merchant in their home country. As a result of their assistance, the family has all of their possessions confiscated, and the male members of the family are sent to prison. Shelley suggests that governments are too powerful and that charges of treason are too easily leveled, without the benefit of a proper trial and circumstantial evidence. The savior is Safie, who uses her own wealth to rescue the De Lacey’s from certain poverty.