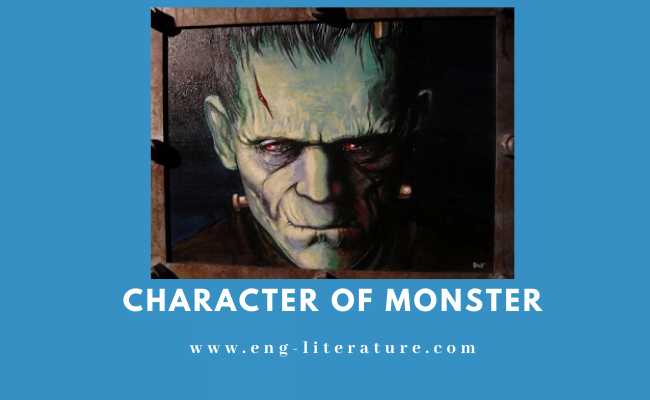 The monster of Frankenstein is a controversial creature: he is furious, full of hatred and commits hideous crimes and inflicts horror and grief upon Victor and his family. However, it is worth noting that he is not born with such qualities. Since his first moments in life, the creature witnesses fear in the eyes of his creator, who flees directly after beholding his loathsome appearance in the dark laboratory. After wandering off the woods, alone and with no knowledge, the creature is faced with scorn and violence from the villagers. Because he cannot understand their behaviour, the monster draws him back to the woods and lurks there.

So far the monster’s experience with humans is not pleasurable; therefore he keeps his presence secret in the cottage near the village. By watching the cottagers closely, the creature acquires knowledge of how to read and speak. Furthermore, by examining the physical appearance of the cottagers and noticing his, he is able to recognise his hideousness, and, is therefore, able to understand the human violent attitude toward him. Soon, he starts to feel affection toward the family for their love and appreciation toward each other:

“the gentle manners and beauty of the cottagers greatly endeared them to me; when they were unhappy, I felt depressed; when they rejoiced, I sympathized in their joy”.

After spending a deal of time with this family, the creature attempts for acceptance but he is faced with the same attitude of refusal. Also, when he saves a girl from drowning, his hideous appearance provokes fear and a man starts shooting at him. By this, the monster changes, he explains his cruelty:

“I am malicious because I am miserable. I am not shunned and hated by all mankind? … If I cannot inspire love, I will cause fear”.

In his early times, the creature is shown full of emotions and affection. And because of his loneliness, he longs for companion: “if any being felt emotions of benevolence towards me, I will return hundred and hundredfold; for that one creature’s sake I would make peace with the whole kind!” When Victor destroys the female companion, the creature is filled with immense anger and evil.

Like Victor, the monster has two sides: he is good and evil at the same time. At the end, he regrets his crimes and while his evil side is apparent that of his creator remains concealed due to egotism.