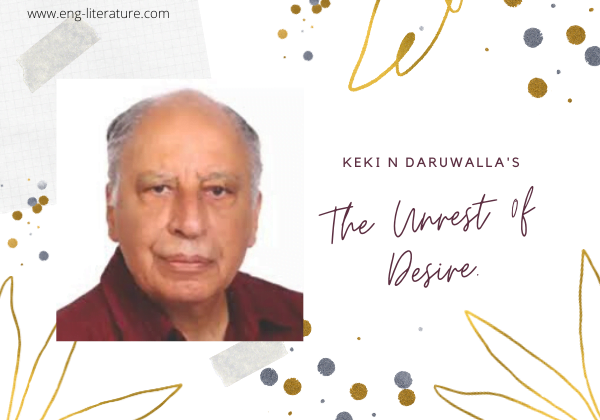 The Unrest of Desire by Keki N Daruwalla

The Unrest of Desire Explanation

‘Is lit up with eyes’ – is expressed through the expression in the eyes. The idea is that any desire, which one feels strongly, finds an expression through the eyes. A man’s eyes show that he is experiencing some strong desire.

‘You slap upon your face’ – you emphatically bring to your face. Whatever the method which one may adopt in order to conceal a certain desire, the desire would find its expression through a man’s eyes. A man may try to hide a desire by putting on a false expression on his face, but it would become perceptible in his eyes.

‘Under slabs of concrete’ – under a thick cover. “Slabs of concrete” is a metaphorical expression to convey the idea of something weighty and heavy to press down a feeling.

‘A coil of bone’ – another metaphorical phrase to mean the same thing, namely a heavy pressure to suppress a desire.

‘Wall’ -This word is here used as a verb meaning “to build a wall” (around a desire and thus to keep it hidden).

‘The cave-impulse at the mouth’ – the outlet through the mouth. A man may keep his mouth shut but the desire in his heart would yet find an expression through his eyes.

‘Etch’ – inscribe; dig lines on a wall in order to sketch the outlines of a picture or to draw the picture in full.

‘Your drives’ —your compelling desires; your forceful desires.

‘Charcoal lines’ – lines drawn with a piece of charcoal.

‘Loping’ – running at a fast pace.

‘Bison and stag loping in charcoal lines’ – fast-running animals depicted on the wall of a cave with charcoal.

‘The burn’ – the mark left on the flesh by a fire

‘It will char your dreams’ – The mark of the fire will even scorch your dreams. The idea is that the intensity of a desire would even haunt a man’s dreams.

The Unrest of Desire Summary

A man may put his heart’s desire under some heavy weight like that of a slab of cement or a large heap of bones, but his eyes would betray the fact that there is a desire in his heart. A man may keep his mouth shut, but the desire in his heart would somehow escape his heart and enter his eyes and thus become visible. A man may adopt any other methods which may occur to him to disguise the state of his heart, but it would still show itself in his eyes. A man may draw all sorts of pictures with a piece of charcoal on the walls of a cave in order to give a false representation of his desire; but it would never quit his heart and would even haunt him in his dreams.

The Unrest of Desire Analysis

This is a poem with a strong psychological interest. It describes a man’s incapacity to suppress a desire or to keep it hidden under some assumed expression on his face. A desire would never fail to manifest itself through the expression in a man’s eyes. Of course anybody looking at such a man may not be able to understand or guess the nature of his desire, but he would definitely come to know that there is a desire in his heart. This fact would become known to him by his merely looking into the eyes of the man concerned. The eyes would provide some sort of evidence of the existence on a desire in the man’s heart.

The idea expressed in this poem is an abstract one; but much concrete imagery has been used in the poem. Eyes manifesting the unrest of desire mask being thrust upon a face; the salt-blood being probed with an insist tongue; a desire being pressed down with the weight of cement slabs or of bones: bison and stag being traced on a wall with charcoal all these concrete pictures to build up which the poet has used metaphorical language.