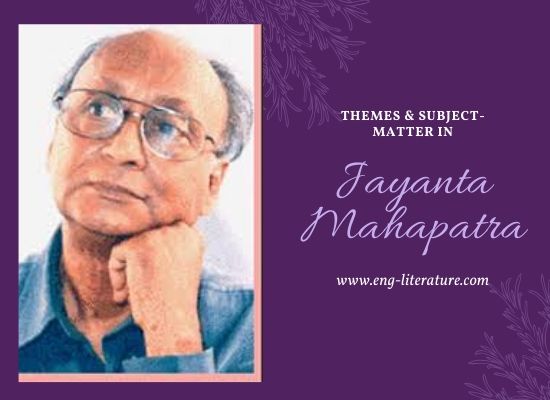 Mahapatra’s thematic concerns in his poetry are many, and in dealing with them he has shown the hand of a master. The excellence of his treatment of his themes matches the dignity and the significance of his themes. The Orissa landscape, the Orissa cultural history and background, the social life of Orissa, and the rites and rituals of the people of Orissa constitute the most important and significant theme of his poetry. This, of course, shows Mahapatra‘s mainly regional outlook. Mahapatra deals human relationships, Indian social problems, love, sex, marriage, human nature, and Nature with a capital N. Thus the thematic range patra’s poetry is wide enough, though it cannot be described as all-embracing.

Dawn at Puri, Taste for Tomorrow, Slum, Evening Landscape by the River and Events are poems which deal chiefly with the Orissa landscape. Of these Dawn at Puri is the most conspicuous, the most realistic, and perhaps the most interesting, with its endless crow noises, a skull lying on the holy land, sea-beach, white-clad widowed women waiting to enter the great temple, and so on. Taste for Tomorrow also depicts a scene at Puri with its crows, with its one very wide street, with its lepers, and its religious-minded crowds thronging the temple door. In fact, Puri figures prominently in Mahapatra’s poetry. Puri and the Konarak temples partly in ruins constitute a big and impressive. If a man who has never been to Odissa, goes through these dozen poems definitely begin to think that he has paid a visit to Orissa and spend a couple of days.

The Themes of Sex, Sexuality, and Poverty

Sex, sexuality, and social concerns come next in importance so far a Mahapatra‘s themes are concerned. In this connection two of the most significant and interesting poems are Hunger and The Whorehouse in a Calcutta Street. Hunger depicts both sexuality and poverty. In fact, sexuality here is closely interlinked with poverty. It is a hungry fisherman with a hungry daughter who has resorted to prostitution, while it is the sexual urge which takes a customer to the fisherman’s shack. As soon as the fisherman leaves, the girl opens her “wormy legs” wide, and the customer feels the hunger there. The hunger is evidently two-fold, there is hunger between the legs, and there is hunger in the belly above. Of course, there is much more in the poem, but sexuality and poverty are surely is theme.

The Whorehouse in a Calcutta Street is a more elaborate poem. Here the customer has much scope for indulging his fancies. The customer is glad that he would get this scope but at the same time he also experiences a sense of guilt and a feeling of shame. While he would be able to gratify his sexual desire he thinks that he would also learn something gruesome about women. As for the prostitute, she does everything possible to please him. And she also betrays her profession saying to the customer: “Hurry, will you? Let me go.” It highlights the customer-prostitute relationship in a realistic manner.

Mahapatra has written a number of psychological, philosophical, reflective poems which show that he is not a poet with superficial mind and an ordinary mental caliber. The Logic, Grass, The Exile, The Abandoned British Cemetery at Balasore, Total Solar Eclipse and The Moon Moment are the most conspicuous and the most impressive of this category. The Solar Eclipse depicts both the approaches to the natural phenomenon of the solar eclipse—the scientific approach and the superstitious approach. The scientific approach is indicated by the line “Quietly the moon’s dark well moves on”, and the superstitious approach is indicated by the reference to the “fearsome Brahmin priest” treating the darkened sun as “a portent of the gods”.

The Moon Moments is philosophical in its own way. It has its realistic lines such as “Those women talking outside have clouds passing across their eyes”. It shows Mahapatra‘s social concerns in the references to socialism and the doctrine of the brotherhood of love which are ideals difficult of attainment. The poem acquires a psychological value from the line “How can I stop the life I lead within myself?”

The Exile has a philosophical content though it has a realistic component too. Land’s distance; the mouldy village; the hills charred by the sun; the corpses burning on the funeral pyres; the old, ailing squalid town; and the long-haired priest of Kali are all true to life recognizable by everyone. But philosophy enters the poem with the lines:

“It is an exile

Between good and evil

Where I need the sting of death.”

The tussle between good and evil is a philosophical concept. Realism and surrealism have beautifully been blended in this poem.

The Abandoned British Cemetery at Balasore is again a psychological poem, full of reflections over the dead. The deaths of young persons are the most poignant and heart-rending. Such deaths give rise to profound thoughts.

According to a critic (K.A. Paniker) Mahapatra‘s dominant concern in his the vision of grief, loss, dejection, and rejection. The tragic consciousness says this critic, does not seem to operate in the work of any other in English as disturbingly as in that of Jayanta Mahapatra. The women are drawn with sympathy and with precision as in the Indian Summer Poem: “The good wife/lies in my bed.” This critic finds moral anguish in The Whorehouse in a Calcutta Street which, according to him, has been absent for a long time from Indo-Anglian poetry. Another critic (S. Viswanathan) expresses the view that, when Mahapatra deals with the themes of trade in flesh, poverty, and destitution, his skill and subtlety do not fail him. Another critic (Chirantan Kulshrestha) says that Mahapatra often excels in writing love poetry, especially poetry which expresses the fragility as well as the stasis of inter-personal relationships. Mahapatra‘s treatment of sex and love, according to this critic, is quite a contrast to the calculated cynicism of Ezekiel or the flaunting sick malady of Kamala Das.