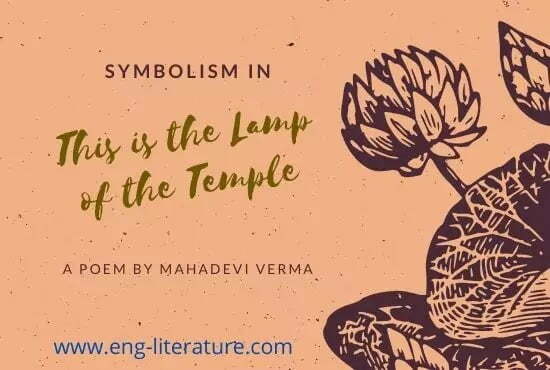 Symbolism in This is the Lamp of the Temple

Symbolism is the most vital part of literature. It makes the language rich, elegant and expressive. It expresses even the inexpressible sensation in a very convenient way. A work of art without proper symbolism is as worthless as a flower without fragrance. However rich and profound or though may be, it has a very little significance in the realm of art and literature unless it is woven into the fabric of images and symbols, rhythm and music. History is replete with instances that most of the poets thrived and rose to eminence with the help of putting the thought into the pattern of images and symbols.

H. Coombes in his famous book Literature and Criticism says that the poets thought in his poetry is felt through the way his works work. Ideas existing in the abstract and for their own sake do of course interest him and have significance for him but if they are incorporated into his writing they find embodiment in expression that comes home to mind and senses and feelings with strength, clarity, precision, vivid immediacy.

The poem is full of several beautiful symbols which are highly suggestive. The first symbol is lamp which stands for the devotion and dedication of the poetess. It may also denote the soul or inner consciousness. As the lamp gives us light and guides the path of the passerby, similarly Lord Buddha has also taken this image of lamp. He Says ‘Be like a lamp’. The Bible also says “Know thou thyself”.

The temple of this poem is also very symbolic. It stands for the World. Mahadevi Verma thinks that the whole world is a temple that is place for devotion and dedication. As the priest goes to the temple bowed head and pure and chaste heart, similarly a man should see whole world as a temple and so do the work of human service accordingly.

The other important image is the image of darkness shows the great spiritual darkness which a saint wants to achieve annihilating the physical attachments. In other words when a behaves like a lamp burning itself for giving light to others, his body and mind becomes pure giving aside to all the five senses so as to merge itself fully to the ultimate reality or the eternal truth. After getting the supreme truth or the supreme bliss his darkness is no longer darkness but it becomes luminous light or vice versa. In Srimad Bhagvad Gita, this state of mind is known as ‘steadfastness’ (stithyaprajna).

It is interesting to note that Mahadevi Verma, like all great poets of India and abroad, has a great fascination for images and symbols. Through symbols, she has conveyed the spiritual, ethical and sublime thoughts in concrete images. She has expressed the infinite, the eternal or the higher consciousness through finite symbols. In this respect, she seems to be very much influenced by the thought and images of the Vedas, the Upanishads, Kabir Das, Sri Aurobindo and above all William Shakespeare. About William Shakespeare, it is generally said that to Shakespeare ‘metaphor is not the dress on thought but the thought itself’. This is exactly what we may see in the poetry of Mahadevi Verma. So far as the symbol of light and lamp may concern, it is very much near to those of Sri Aurobindo. In other words her poems are charged with revelatory symbols. It is always associated with nature.

In the last stanza the wind stands for the lost of the real path of the human being. The comparison of the lamp to the priest is very suggestive. As a true priest is fully devoted to the temple, so the lamp is very much devoted to burning itself continuously in the dead of night. Our human soul is very much near to this little sentinel of light that guides again and again to the deviating body. For this, what is needed most is the oil of faith to oneself and so for that matter the ultimate truth or God. The poet lays much stress on awaking every moment so that the discontinuous lamp should not be put out. It reminds us of what R. N. Tagore says

“A lamp can never light another lamp unless it continues to burn with its own flame.”

Thus the symbols used by Mahadevi Verma are highly suggestive. They call for our deep spiritual and mystical knowledge for understanding their deeper meanings.