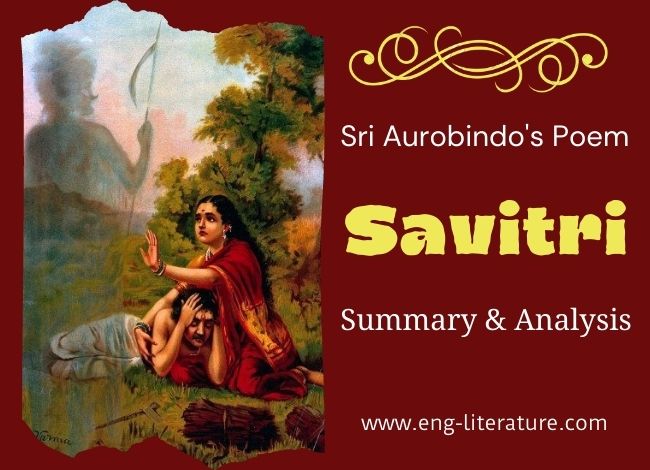 Sri Aurobindo is a versatile genius and an intellectual giant. His outstanding achievements in prose, poetry and drama rank him as the greatest figure of Indo-Anglian literature. He considered himself first and foremost a poet. He is perhaps a greater seer and prophet than Rabindranath Tagore and is better understood for the integral philosophy which he has exposed through his writings like The Life Divine and The Human Cycle.

Savitri was originally planned to be a simple narrative poem in two parts, the first Earth for its scene of action and the second carrying the action “Beyond” to the worlds of Night, Twilight and Day, concluding with the heroine calling down to this obscured and perverted world the purifying and transforming powers of Satchidananda.

The poem opens on the crucial day ‘the day when Satyavan must die’, and it ends with the resolution of the crisis. Thus the material plane at the beginning and the spiritual plane at the end are brilliantly bridged. It is an arresting opening.

The first canto evokes the symbol ‘dawn’. First there is the Night: it is pitch-dark. The process is simultaneous-light coming and darkness retreating and vanishing. Thus Aurobindo demonstrates the emergence of knowledge from ignorance. Savitri‘s life and trial has been hinted at.

In the second canto entitled ‘The Issue‘ Savitri is entangled between Death Ignominious (Yama) and Life Eternal (Savitri). At this crucial moment, she does not give way to despair. Although fate is inscrutable, Savitri should issue forth. Savitri is called to action when she is faced with the mighty crisis of the challenge of Death claiming Satyavan. So also when the human soul is prompted by a spiritual struggle it rises from the unconscious state to the full stature of Divinity.

The third canto refers to the birth of Savitri because of the world’s desire. King Aswapathy begins to have some spiritual awakening. Then his purified soul tries to keep in touch with the intimations of immortality.

In the fourth canto Aswapathy tries to know the bases of the secret knowledge. The mystery is that of the Lila of God descending into clay and clay again aspiring to Godhead. Then the soul achieves a complete spiritual transformation.

Aurobindo then resorts to a retrospective narration describing the birth and childhood of Savitri, her growth from girlhood to womanhood. She happens to go near the hermitage where Satyavan was looking after his aged parents. Savitri and Satyavan meet in joy and recognize the hand of fate. Narada, the divine sage speaks highly of Satyavan’s varied perfections but Informs that he is fated to die a year later. But Savitri remains unperturbed and is prepared for the cosmic role of struggle and redemption.

Then in Book VIII entitled ‘The Book of Yoga’ Aurobindo describes the wedded love of Satyavan and Savitri. Their joys however, are short-lived, as Savitri is conscious of Satyavan’s approaching death. But she is ready for the approaching trial. She looks within and achieves full efflorescence. As Mr. Purani puts it, “Both Aswapathy and Satyavan, in their aspiration and transforming spiritual action, strive not for themselves alone but for all, for a general liberation, a universal realisation and a splendorous new creation. Thus armed with vigour and vision she follows Satyavan to the forest. When the fated hour has come, Satyavan cries out her name and falls as one dead.

Books IX-XI deal in detail with the continued struggle between Savitri and Yama for the soul of Satyavan. It is indeed like Siddhartha’s struggle with Maya. Savitri’s ordeal is more tensed and carries us to the supermost height of victory-victory over Death itself. Dr. Iyengar writes,

“We are bewildered even as Satyavan (but we are also content to exclaim like Satyavan) with a feeling of peace and a deep sense of fulfillment that Savitri is the cause of all. With her enchantment she has turned us round.”

Savitri, her love’s labour won, returns to the place in the forest where she had earlier left her husband’s listless body.

Thus the three parts of Savitri are respectively the Aurobindonian versions of the Divine Comedy, Paradise Lost and Paradise Regained. Alfred Wallace writes,

“This story of Savitri is the gem of the whole poem and I cannot recall anything in poetry more beautiful, or any higher teaching as to the sanctity of love and marriage. We have really not advanced one step beyond this old-world people in our ethical standards.”

“The characters-Aswapathy. Savitri. Satyavan and Yama–become more than characters, more even than ’round’ characters; now they are persons, now they are gods or god-like figures, and now they are verily occult forces or symbols or regions or powers. The bardic legend’ thus ecomes a Yogic ‘symbol’, without however ceasing to be a legend, or even a romance.”

Thus symbols present an objective, visible meaning behind which an invisible, profounder meaning is hidden. Savitri sets herself against fate; the impossible becomes possible, the lies becomes the truth. Savitri and Satyavan are the first-born of a new supernal race, they are the Supreme’s dual power-she the Force, he the Soul-set in the world to refashion human nature and earth-nature.

“what is so striking about this epic is its sheer sweep, its amazing modernity, its pervasive mystical quality and its singular poetic power.”

To sum up, in the words of Mrs. Prema Nanda Kumar: It is clear that Sri Aurobindo, in writing this colossal poem, has a fivefold aim:

In the first place he wished to write a modern epic, retelling the legendary story of Savitri with an epic amplitude and sweep.

In the second place he wished to write a poem that would at the same time be also a manual of Yoga, embodying stairs and spirals of spiritual aspiration, involving trials and struggles, doubts and difficulties, but culminating in the summits and high mountain lakes of spiritual victory and realization. The poem was thus to comprise both the toil and the regard, the human effort to transcend humanity and the final blissful realization, the manifestation of the Divine.

In the fourth place, Sri Aurobindo wished to make Savitri a fore-taste of the ‘Future Poetry’ the poetry that crystallises at auspicious moments into the mantra.

Finally he wished to reproduce in Savitri something to the Valmikan, Upanishadic and Kalidasian verse movement; in other words to evolve a blank verse movement that would strive to combine a Sanskritic clarity and purity with a Vedic manifoldness in meaning.