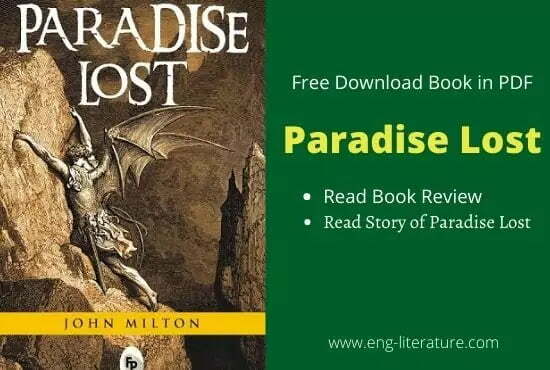 John Milton, in spite of being a blind poet, holds an unparalleled imaginative genius that shapes English literature even today with his rare gift, The Paradise Lost. Almost 350 years passed since its publication, the popularity of the book has not been faded. Even to readers in a secular age, the poem is a powerful meditation on rebellion, longing and the desire for redemption.
Paradise Lost is a blank verse containing 10,565 lines divided into twelve books, each headed by a prose “Argument” or summary of the contents.
Paradise Lost is a Christian epic, based on the Biblical story of the Fall of Man, which according to Milton is “not less, but more heroic than the wrath of stern Achilles“, It is the Christian story and mythology that supplies the material of the epic. The epic machinery’ in the poem is also based on the Christian doctrine of angels, which was held to be true by the poet and his contemporaries. The Homeric gods of the classical epics could not be accepted by the Christian poet and in their place, angels and demons of Christian conception are allowed to play a large part in the epic.

Satan, vanquished leader of the Fallen Angels, regroups his followers in Hell and summons a council to renew vain war with heaven.

After discussion by the devils, Satan’s plan is adopted to plague God by annexing the newly created world. Satan journeys through Chaos toward the world.

From his Heavenly throne God perceives the path of Satan and informs His Son of Satan’s future success in seducing mankind. The Son of God offers himself as ransom for man. Satan lands on Mt. Niphates.

Satan contemplates the beauty of the created world. Eavesdropping he learns of the Forbidden Fruit from the conversation of Adam and Eve. At night in the form of a toad Satan whispers temptation of Eve.

On the morrow Eve relates her dream to Adam and be comforted. After morning prayers they attend to their pleasant duties in the Garden The angel Raphael is sent by God to warn Adam and Eve; he explains how Lucifer, jealous at the promotion of Christ. incited angels to rebel against God.

Raphael recounts the three days’ war in Heaven: The surge of the Son of God against the rebels, the casting of the rebels out of Heaven to Hell’s torment, and the triumphant return of the Son to the throne of God.

Adam inquires from Raphael about the structure of the universe, receives some answers, and is told to concern himself with his own affairs. Adam tells Rapheal what he remembers about his own creation, and also about his first meeting and nuptials with Eve. After admonishing Adam against passion, Raphael departs.

Encountering Eve alone, Satan persuades her to eat the forbidden fruit of the Tree of Knowledge. Adam, knowing better, eats of the fruit in his loving resolve to share her fate.

God sends His Son to pronounce judgement and in pity to clothe the pair. Sin and Death invade the created world, and Satan returns to Hell nastily to boast of his triumph. After lamentations, Adam and Eve are reconciled and to plead to God for mercy.

Sent to dispossess Adam and Eve from Paradise, the angel Michael reveals to Adam the course of history up to the Flood.

Michael reveals to Adam the mission of the Son of God and the attendant means whereby Adam’s descendants may regain Paradise within themselves. He conducts our first parents out of Eden, “the fiery sword waving behind them, and the cherubim taking their stations to guard the place.”