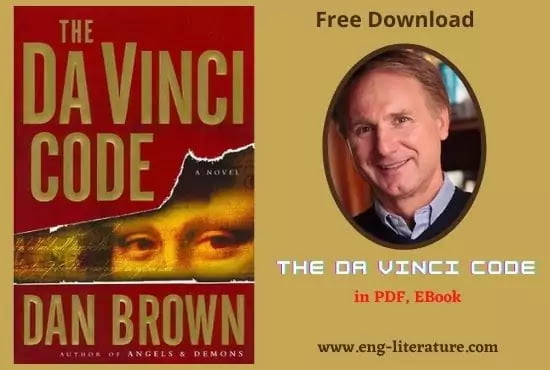 The bestselling novel, The Da Vinci Code is one of Dan Brown’s superb creations.  Dan Brown was born on June 22, 1964, U.S., as the son of a mathematics teacher and a church organist, Brown was able to develop a fascination with the paradoxical interplay between science and religion. These themes eventually formed the background setting for his work. His novels were well-researched novels that centered on secret organizations and had complex plots. In 2005, Brown was named one of the 100 Most Influential People in the World by TIME Magazine.

The book has been sold more copies than any book since the Bible. The Da Vinci Code is a 2003 puzzle spine chiller novel, it pursues symbologist Robert Langdon and cryptologist Sophie Neveu after a homicide in the Louver Museum in Paris makes them end up associated with a fight between the Priory of Sion and Opus Dei over the likelihood of Jesus Christ has been a partner to Mary Magdalene.

The Da Vinci Code is, in a manner of speaking, two books in one. The first is a very good suspense thriller. Author Dan Brown must either play or at least be aware of computer games; the plot has a computer game feel to it. The protagonists are dropped almost immediately into a situation of peril and must extricate themselves by solving a series of puzzles, with one puzzle’s solution granting the privilege of looking at another puzzle, which also requires a solution.

There are two protagonists, Robert Landon and Sophie Neveu — Robert an expert on religious symbology and a Harvard professor, and Sophie a cryptologist and Parisian police agent. Both have skill sets, not by accident, which allow for great success at solving puzzles — at least the type of puzzles presented here.

The opening chapter is a grabber. Jacques Sauniere, the curator of the Louvre museum, is shot in the stomach by an albino monk named Silas and left to bleed slowly to death. Jacques Sauniere is, as chance and the author would have it, the grandfather of Sophie Neveu.

The time it takes Jacques to die is time enough for him to set up the first of the puzzles to be solved. His body is found naked, arms and legs splayed, with writings (written by Jacques in his own blood) which are meant to be secret coded messages to his granddaughter, Sophie. Robert Langdon is drawn into this murder (and its startling aftermath) as the Inspector on the case, Bezu Faches, believes he is the killer. Sophie, knowing Robert is innocent, helps him escape from the Musee du Louvre, and the chase (and puzzle solving) is on.

The plot turns are suspenseful, the mysteries and their solutions clever, even ingenious in some cases. This is a true nail-biter. The problem is with the “second” book incorporated into this first rate thriller. The plot here revolves around an intellectual belief that Jesus (yes, the Christian Jesus) had a love affair and/or was married to Mary Magdalene, who was in fact pregnant with Jesus’s child at the time of the crucifixion — a fact supposedly known by the Church and covered up. The “thing” everyone is being chased and killed for, is the secret of the location of the holy grail, a location known to many who belonged to a secret society throughout history, including Leonardo Da Vinci. No, the holy grail is not, under this theory, the cup Jesus drank wine from during the Last Supper, but rather a metaphor for Mary Magdalene. She is the “cup” that held Jesus’s child: she is the true holy grail.

Da Vinci (and many others in history, including Walt Disney) have made allusions in their works to “the truth” of the grail. Da Vinci “knew” the truth. How do we know? Dan Brown has a “grail expert” named Teabing tell us. See Saint Peter in Da Vinci’s great work “The Last Supper?” That is “clearly” not a man, but a woman. Not only a woman, but it “must be” Mary Magdalene!

Sure, who else? Another of the author’s expert characters says:

“Finally,” Teabing said [still in reference to Da Vinci’s “The Last Supper”], “if you view Jesus and Mary Magdalene [formerly Saint Peter] as compositional elements rather than as people, you will see another obvious shape leap out at you.” He paused. “A letter of the alphabet.”

What does this compositional M mean? Does it stand for the other Mary (Jesus’s mother)? No, does it stand for “Master of the Arts,” which Da Vinci no doubt believed himself to be? Did Da Vinci divine the future, see Walt Disney’s work, and create a great M as tribute to Mickey Mouse?

Or is this M merely a compositional element in a great work of art? Anyone who has taken art history and art theory in college knows that X’s and W’s and, yes, M’s are common compositional techniques to balance a painting. But this particular M must mean only one thing as far as Teabing is concerned. It means Mary Magdalene gave birth to Jesus’s child and Da Vinci knew it!

The novel ends by cracking the da vinci code. This kind of conclusion is only possible when someone already has a conclusion and is looking to invent reasons to support it. Not very scientific, nor very logical. It is the intellectual equivalent of beer drinkers believing they were picked up by aliens and taken for a ride in a spaceship. The author might as well have had everyone running around searching for the secret location of a box of alien bones, proof of visitors from outer space.

Personally, I would recommend the book to the people who are looking for an exciting read but who also like breaking codes, figuring out secrets and enjoy solving all the pieces of the puzzle.

Robert Langdon, an American professor from Harvard, is awakened in the middle of the night by a phone call. Langdon is staying at the Ritz in Paris where he has just delivered a lecture on religious symbology. The phone call is from the concierge who tells Langdon there is a very important man who wants to see him. Langdon asks the concierge to take the man’s number so he can call him the following day. Minutes later, the concierge calls again to tell Langdon that the visitor is coming to his room.

Soon after, Lieutenant Jérôme Collet knocks at Langdon’s door. Collet works for the DCPJ, the French equivalent of the U.S. FBI. Collet says he has been sent to ask for Langdon’s help in investigating the death of Jacques Saunière. The DCPJ learned from Jacques Saunière’s date-book that he was scheduled to meet with Langdon that evening. Collet shows Langdon a strange picture of Jacques’s corpse. Collet tells Langdon that Jacques situated himself in the odd position before he died.

Meanwhile the albino, whose name is Silas, returns to his bare room. He calls the Teacher to tell him that the three sénéchaux and the Grand Master are dead. Moreover, all four gave the same information before they died. Silas has learned from them that the keystone is located in the Church of Saint-Sulpice in Paris. The Teacher says he will arrange for Silas to enter the church. Before Silas goes to the church, he beats himself with a heavy, knotted rope as punishment for his sins. Although Silas already wears a cilice, he believes he must further purify himself.

Langdon and Collet arrive at the Louvre. Inside Langdon meets Captain Bezu Fache, who informs Langdon that the photograph is only the beginning of what Saunière did. Fache questions Langdon about his arranged meeting with Saunière that evening. Langdon tells Fache that he has never met Saunière and it was Saunière who requested the meeting, which never occurred. Langdon tells Fache that he was looking forward to meeting Saunière because Saunière was knowledgeable in the subject of Langdon’s latest book. Langdon hesitates to explain that the book is about the iconography of goddess worship. As Langdon anticipates, Fache has difficulty understanding the controversial topic.

Langdon asks Fache if the security cameras throughout the Louvre are real. Fache says they are not. Instead, the Louvre has a security system which seeks to contain intruders by sealing off rooms and exits. As Fache and Langdon near the murder scene, Fache tells his officers not to bother them for any reason.

The same evening, Bishop Manuel Aringarosa, the president-general of Opus Dei (a notorious Catholic organization), boards a plane. Earlier, he received a call telling him the keystone has been located. The caller asks for his influence in gaining access to Saint-Sulpice that evening.