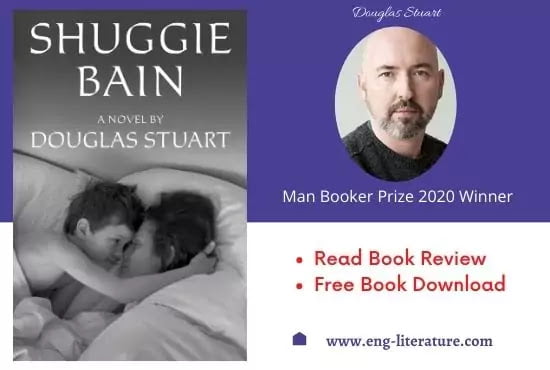 International Man Booker Prize 2020 winning book, Shuggie Bain is a stunning debut novel by a Scottish writer, Dauglas Stuart who narrates the heart-wrenching story of a young boy and his alcoholic mother, whose love is only matched by her pride.

The novel is autobiographical by nature. Many incidents and facts are directly related to the life experience of Dauglas Stuart, the author of the novel. For Stuart, who had spent ten years chipping away at a draft at nights, on weekends, on planes, and in foreign hotel rooms on monthly business trips, it was the undreamt-of realization of a long-deferred dream. At 43 — he’s since turned 44 — 20 years into a career as a fashion designer, a trade he learned as a way out of the Glasgow tenement where he, like Shuggie, spent a misfit youth, he was an author at last.

The agonies of 1980s Scotland — driven by unemployment; the erosion of industries like shipbuilding, mining, and ironworking; and a guttering recession – are very real, but, outside maybe Trainspotting, these struggles are hardly well known in the U.S. Shuggie Bain is set in this world of men run aground after the closure of mines, women sunk under the weight of drink, families living week to week on public assistance and disability benefits. It speaks in a Scottish English whose rhythms, even whose vocabulary, can be alien for American readers.

A must read novel that cracks open the human heart, brings you inside, tears you up, and brings you up, with its episodes of unvarnished love, loss, survival and sorrow.

This is a story about poverty, addiction and abuse. The book kicks off with Shuggie Bain, a 16 year old boy, and the protagonist who lives in a dirty bedsit on the Southside of Glasgow, Scotland and working on a supermarket deli counter. He sells some kind of food like burgers or hot dogs. He earns very little money and with that money he rents a small room. He goes to school but he has to skip a lot of days because he has to work toward his living and he tries to be normal.

The next part starts in the year 1981 and this is the beginning of his family story he at that time he lived with his mom, Agnes, his dad, Shug his two siblings, Catharine and Alexander (Leek) and his grandparents.

Shuggie’s mother Agnes walks a wayward path: she is Shuggie’s guiding light but a burden for him and his siblings. She dreams of a house with its own front door while she flicks through the pages of the Freemans catalogue, ordering a little happiness on credit, anything to brighten up her grey life. Married to a philandering taxi-driver husband, Agnes keeps her pride by looking good—her beehive, make-up, and pearly-white false teeth offer a glamorous image of a Glaswegian Elizabeth Taylor. But under the surface, Agnes finds increasing solace in drink, and she drains away the lion’s share of each week’s benefits—all the family has to live on—on cans of extra-strong lager hidden in handbags and poured into tea mugs.

Agnes’s older children find their own ways to get a safe distance from their mother, abandoning Shuggie to care for her as she swings between alcoholic binges and sobriety.

Shuggie is different. Fastidious and fussy, he shares his mother’s sense of snobbish propriety. Shuggie is meanwhile struggling to somehow become the normal boy he desperately longs to be, but everyone has realized that he is “no right,” a boy with a secret that all but him can see. Agnes is supportive of her son, but her addiction has the power to eclipse everyone close to her—even her beloved Shuggie.

A heartbreaking story of addiction, sexuality, and love, Shuggie Bain is an epic portrayal of a working-class family that is rarely seen in fiction. Recalling the work of Édouard Louis, Alan Hollinghurst, Frank McCourt, and Hanya Yanagihara, it is a blistering debut by a brilliant novelist who has a powerful and important story to tell.

“If you want to survive, you need to try harder, Shuggie.”

“I mean it. You are going to be an amazing artist, and I’m going to get married, and between us we’re both going to get the fuck out of here and away from this dump.”

“Rain was a natural state of Glasgow. It kept the grass green and the people pale and bronchial.”