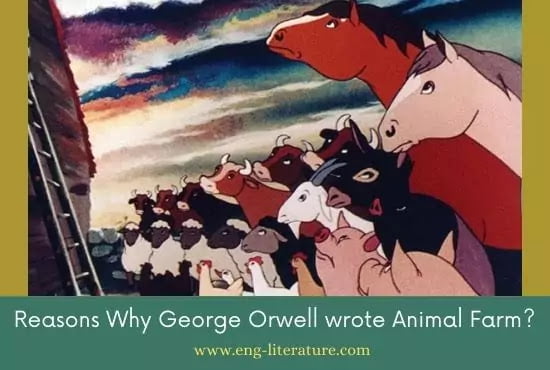 Throughout the course of his life, George Orwell had joined the Indian Civil Service, lived among the tramps, worked as a teacher, and experienced both disastrous World Wars. In Malcolm Bradbury’s words, “He had been down and out in Paris and London, followed the road to Wigan Pier, fought in Spain, and made his homage to Catalonia.” Briefly, various factors and his experiences caused Orwell to write this striking political satire which basically criticizes the times in which he lived.

Animal Farm was first published on August 17, 1945, right after the Labor victory in the British general election, and in the same month, when U.S. atomic bombs dropped on Hiroshima and Nagasaki, causing the Japanese surrender, and ending the abominable World War II.

Orwell had conceived the central idea for the novel in 1937, when he fought during the Spanish Civil War, with the POUM (Partido Obrero de Unificacion Marxista) militia, and witnessed the communist purges of the Spanish leftists.

When Orwell began to write Animal Farm at the end of 1943, he was in an uncomfortable position. Until then, he had always believed that the Marxist Revolution of 1917 had been betrayed by Stalin, and according to Orwell Stalin’s character as an assassin had been made obvious. His lack of respect for truth, consistency, and moral principles had been clarified by his rapid propaganda shift in 1939 towards Germany, and the return shift in 1941 when Germany attacked Russia. However, then, no one was courageous enough to blame Russia, because she was fighting bravely with Germany, and delaying the possible attack on England.

Orwell’s fears about Russia were justified after the war when Russia took over many Eastern European countries, refused to cooperate with the Allies, alienated the West, and retired behind the ‘Iron Curtain’. It was ironical that the time he started writing the novel coincided with the Teheran Conference where the Western Allies sat down with the communists to plan the overthrow of Germany. A similar meeting is held through the end of the novel, when pigs and men sit down for a compromise, and the revolution of ‘Animal Farm‘ loses all its value.

With Animal Farm Orwell reflected the betrayal of the Russian Revolution by Stalin: the treacherous treatment towards Trotsky, the fudges of the Nazi-Soviet pact, and the abuses for their own advantage and survival.

Obviously, the main factor that caused, a socialist, George Orwell to write the novel was the Second World War, and the Fascist totalitarianism of the 1930’s and 40’s. After the disastrous war, most parts of Europe lay in waste, full of nazi extermination camps, in which many millions of innocent had died. The postwar years were an era of crisis for the liberal conscience, which had leaned leftwards in 1930’s, and now realized many of its radical allegiances, and corrupted by the harsh realities of war, power and terror. During the war years Britain had undergone a quiet social revolution and now, had a new, weaker place in the world. Orwell, himself, resembled his country to a family with the wrong members in control.

In a way, Orwell wanted to be a recorder of the economic, social, and political problems of his age. In his essay, “Inside the Whale”, he said, “The literature of liberalism is coming to an end, and the literature of totalitarianism has not yet appeared and is barely imaginable. As for the writer, he’s sitting on a melting iceberg; he’s merely an anachronism, a hangover from the bourgeois age, as surely doomed as the hippopotamus”.

According to Orwell, an age of totalitarianism was now inevitable and the end has come not only for the aesthetic tradition of modem writing but for all moral independence as well. Orwell’s book is a direct encounter with the processes of totalitarianism exploring the powers of terror, propaganda, and the process of revolutionary self-betrayal, and it emphasizes that freedom of thought and speech can be claimed as a transcendent Western heritage. In other words, the book totally reflects the author’s thoughts and despair about the age he lives ill.

Another reason why Orwell wrote Animal Farm is that he wanted to point out that the failure often lay within the revolutionary process since its leaders ignore those whom the revolution was meant to serve. Orwell, also shared the 20th century hope of a socialist revolution which would transform and reconstruct the society. With his novel, he emphasized the fact that those for whom such revolutions were intended, were often the victims rather than the beneficiaries.

One of the important factors causing Orwell to create this political satire was his greatest fear that people easily forget what had happened in the immediate past. Thus, in a way, he rewrote the history and moral principles disguised in ‘a fairy story’, and reminded people, and especially leaders of Western democracy, of the facts. After discussing the factors that caused Orwell to write Animal Farm, let us have a look at the author’s own words which would undoubtedly enlighten us about his intentions and expectations:

Being in despair, fighting a battle against the left from within the left – as he stated, in an introduction to a foreign language edition of Animal Farm, Orwell says that his main intention was to show how false the popular idea that Soviet Russia was a socialist state: he wanted to save socialism from communism. Animal Farm also possesses the qualities of a traditional work of art. Orwell said,

“Animal Farm was the first book in which I tried, with full consciousness what I was doing, to fuse political purpose and artistic purpose into one whole.”

Some critics read Animal Farm as an allegory of the Russian Revolution of 1917, such as an American critic, Dwight Macdonald. In a letter to him, Orwell stated,

“I meant the moral to be that revolutions only reflect a radical improvement when the masses are alert and know how to chuck out their leaders as soon as the latter have done their job.”

To sum up, the economic, social, and especially political problems of his age were the main factors leading Orwell, a man of great political and moral intelligence, to write the novel, a story touching at the heart of contemporary world affairs and anxieties.