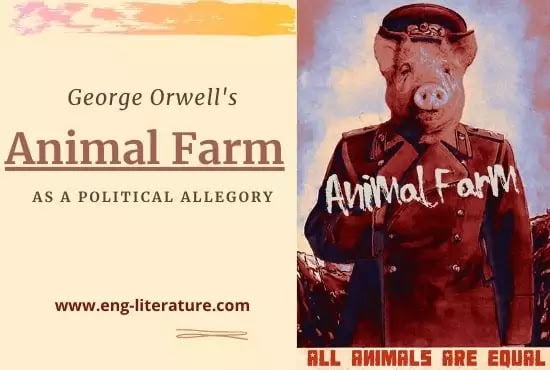 Animal Farm as an Allegory

Allegory is created in a literary work when one or more meanings, in addition to the literal one, are to be derived by the reader. In the story objects, incidents, or people are represented indirectly to the reader by means of personification or symbolism. Since the neo-classic age in English literature, allegory has been comparatively rare. In modern times, authors have been more open and direct in the expression of their ideas. Shelley’s Prometheus Unbound is an outstanding example of allegory in the romantic period. Here Prometheus represents mankind, Zeus (Jupiter) stands for evil or the spirit of oppression and Asia represents the spirit of nature. With Shelley, Zeus, who has Prometheus bound into slavery, stands for the Church and its orthodoxy, its priests and ministers.

Certainly as a mocking allegory of the first thirty years or so of the Russian Revolution it is a work of considerable poise, a poise that derives from Orwell’s long nurtured cynicism about communism, which had resisted the indulgent attitude to Russia born war-time alliance as much as it had resisted the fashionable communism of literary and intellectual circles during the thirties. But for the reader of today it is this very poise which makes the book trivial. The allegory is too pat, the confidence of the narrator (the confidence of one telling a nursery tale) too secure. Orwell’s

“fairy story” is only clever form for expressing a set of opinions that have been held so long that they no longer admit the complexity of the experience they claim to explain.”

We may perhaps derive some pleasure from elucidating the allegory. We may identify old Major, the aged porker who has the dream and who provides the ideological impulse to the revolution, as Karl Marx, and we may recognize the quarrel between Napoleon and Snowball as representing the rift between Stalin and Trotsky. And we may like to find the allegorical counterparts of the treason trials, the emergence of the Soviet secret police, the drive for technological achievement, the perversion of the ideals of the revolution and the misuse of propaganda.

On the allegorical plane it certainly helps to have some acquaintance with Russian history since the October Revolution, 1917. Even though the moral pattern of events in the book stands by itself, and will be no doubt so when the historical models have passed out of common knowledge, there is undeniable pleasure to be gained from going a little further than the most obvious correlations, Napoleon/Stalin and Snowball/Trotsky, and discovering the New Economic Plan and the controversy over agricultural and industrial priorities. But more important than detailed knowledge of Russian history familiarity with the language and methods of Marxist argument, which one loses the full flavour of passages such as the following:

“A bird’s wing, comrades” he said, “is an organ of propulsion and not of manipulation. It should therefore be regarded as a leg. The distinguished mark of Man is the hand, the instrument with which he does all his mischief.”

This book is not an allegory in which everything has to stand for something else. To read it in this way reduces it to the level of a sophisticated Crossword puzzle. Thus, there is no figure corresponding to Lenin (Major dies before the rising takes place); and the farm does take on a life of its own. The friendship between Clover and Boxer, or the cynicism of Benjamin does not need to be explained in terms of actual history. It may be that, for those who know their history, the rebellion of the hens seems parallel to the rebellion of the rebellion of the Russian sailors at Kronstadt in 1921, or that the two farmers Frederick and Pilkington represent Germany and England. But it is not really necessary to an understanding of the book and may lead to incorrect history) to work at this level of detail.

Indeed by doing so, we may miss the wider implications of Orwell’s fairy-tale. Napoleon is presumably not given that name by accident, and the Russian Revolution is not the only one to have ended in dictatorship. If we read the relevant parts of the Prelude we will find there Wordsworth‘s own story of another god that failed when the movement that started with the fall of the Bastille ended in the Jacobean terror. (When we now read, in the first book of Gulliver’s Travels, that Flimnap the Treasurer can cut a caper on the tightrope higher than anyone else who can learn from the notes that a reference to Walpole is intended; but it seems to be a pity to limit the parallel between holding office and ability to dance on a rope to a politician who died over two hundred years ago.) Animal Farm apparently serialized some years ago in an opposition in Ghana under the Nkurmah regime, and for its readers then Napoleon presumably took on another, more local identity.

Of course, in writing Animal Farm, Orwell had in mind the Russian Revolution of 1917 which seemed to him, after having started off with high ideals and noble hopes, to have degenerated into a hypocritical tyranny under the dictatorship of Stalin. At the outset, however, it is important to observe that Orwell’s purpose was to attack Stalinism specifically, and not Socialism in general. Orwell believed that one of the difficulties confronting Socialists was the widespread notion that therefore any criticism of Russia was a criticism of Leftist political ideals. In short, Animal Farm is the mocking voice of a Socialist at the expense of Soviet experience.

More fundamentally, though, it is also a lament for the fate of revolution and the hopes they inspire, and as a moving commentary on man’s constant compromise with truth, it contains most of Orwell’s views about men and politics.

It was certainly not Orwell’s intention to imply that. Just as it would be foolish for animals to rebel against human control, so also it is impossible for oppressed masses to rebel against a tyrannical ruling class. But the author’s didactic purpose loses some of its force because the reader cannot accept quite seriously (as one can accept say, the big men and the little men in Gulliver‘s Travels) the idea of the rebellious animals. They are obviously, like many animals in fables, men in disguise; but the illusion is spoiled when real men appear in the fable.

In other words Animal Farm does not quite hold together as an allegory, and the reader has constantly to be thinking of the story’s meaning in contemporary terms, to avoid nothing the inconsistencies of the story itself.