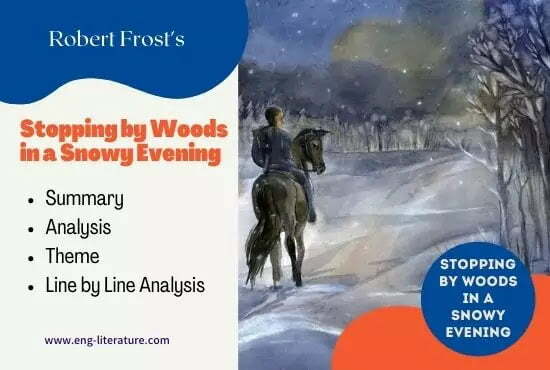 Robert Frost Stopping by Woods on a Snowy Evening

Frost’s “Stopping by Woods on a Snowy Evening” was written and published in 1923 in the volume of poems entitled New Hampshire. This is one of the most widely read lyrics by Frost. Pt. Jawahar Lal Nehru, the beloved Prime Minister of India, used to read this poem and get inspiration out of it.

Stopping by Woods on a Snowy Evening Theme

This short lyric of sixteen lines begins with a description of the deep woods through which the speaker is passing on a dark, snowy evening. The owner of the woods lives away in the village. That the owner lives far away, he won’t be able to see the speaker at his property. A reference to the snow occurs. The second and third stanzas are fond speculations about the “little horse”, who is not willing to stop beside the woods because no farmhouse is visible. He shakes, therefore, his harness bell to know if the master has stopped there because of some mistake. The fourth stanza is a beautiful sketch about the woods. But the speaker is reminded of his promise to return home in time, so he must go away to cover up the miles.

Stopping by Woods on a Snowy Evening Analysis Line by Line

Woods– forests, jungles. His house…though– Though the forester lives far away in the village.

To watch his snow-When the speaker is watching the scene of the woods, snow fall had begun.

To stop without farmhouse near-Had there been a farm house nearby, the horse could stop-there and get fed.

the sweep of flake– When the speaker was watching the silent scene of the forest, no other sound was to be heard except that of the blowing wind and snowfall.

downy– soft to touch as the fine fibre,

promises– word of honour. And miles to go sleep– According to John Ciardi, the last two repetitive lines have a symbolic significance. The primary meaning is : I have a long way to go before I get to bed tonight. But the same line is repeated, and is transformed into symbols.

The Symbolic Interpretation of the Fourth Stanza

As Leonard Unger and William Van O’Connor point out the words are unusually lovely, but the speaker must eventually be about his business and attend to his responsibilities. There are some other implications in this stanza. The woods symbolize beauty in general, of aesthetic value. The word ‘but’ in the second line enforces this symbolism. The speaker might not leave this extraordinarily aesthetic beauty, had he no ‘promises to keep and no miles’ to go. Then he might linger on to watch the woods, their interior, their darkness and depth, which is lovely, and which thus suggests the peacefulness of death. In this way, the woods equate death with an exclusive commitment to aesthetic value.

The following lines of the poem have implications which are in accord with this interpretation The speaker feels the urge to escape into loveliness, into Peacefulness of death, but he acknowledges the fact that there are also other values and other urges. He is committed to life, in all its adversity and complexity, and he wants to go on living to fulfill that commitment, for death will come in time-“And miles to go before sleep.” And death is but a prolonged sleep.

According to the interpretation of L. Thompson, though the woods are “lovely, dark and deep to watch and enjoy,

“we are impelled forward and away by other und inevitable continents. There are the promises which we have made to ourselves or to others, or which others have made for us. And there are the “miles” we must travel through other kinds of experience before we yield to that final and inevitable commitment, sleep in death.”

Stopping by Woods on a Snowy Evening Summary

The poet thinks that he knows whose these woods are. He also knows that the owner of these woods is a man who lives in the village. The forester, therefore, will not be able to see him stopping beside the woods to watch them being covered up with snow.

The poet or the speaker believes that his little horse must think it odd to stop in these woods without a farmhouse nearby between the woods and frozen lake on the darkest evening of the year.

The horse gives a shake to the bells of his rein to know if the poet has stood there by some mistake. The only other sound that is heard in the woods is that of the wind and snow-fall.

The woods are beautiful, dark and deep to look at But the poet-speaker has to keep his word given to others, and, therefore, he has to go many miles to reach the destination before he retires to bed for sleep.

Stopping by Woods on a Snowy Evening Analysis

The speaker in this brief monologue is a farmer who has stopped his sleigh for a time to admire the snow falling over the night darkness woods. His horse, puzzled by the pause, takes the same attitude towards it which would be taken by anyone with a worldly demands- remembers that he has “promises to keep” and a schedule to follow. “It is, perhaps, a simple story of a momentary halt to admire beauty, in the business of living” (Waltair and others). Or perhaps if one wants to follow one of the unobtrusive suggestions it is a picture of a man who, in the midst of life, has a brief and dim comprehension of the inevitable sleep which is death.

This lyric is a well-known poem of Frost. It is the one which has become very popular and has been widely anthologized. It is not only the most perfect poem, but also “one of the best known poems of the twentieth century” (D. Unger and William Van O’Connor).

Also the poem is highly expressive of modern temper. The use of ‘but’, ‘promise’ and ‘miles’ has symbolic significance. “Promises” are the commitments made to others which must be fulfilled before the inevitable ‘sleep’, which is death. ‘Miles’ stretch before the speaker, and it denotes that his life-span is long enough to complete his ‘promises.’

The poem is of special interest to the modern Indian readers. It captured the attention of the late Premier Jawaharlal Nehru, who was deeply moved by the last stanza of the lyric. He had scribbled it on a piece of paper and glued it to his writing desk. The last stanza which attracted Nehru so much is as follows:

“The woods are lovely, dark and deep.

But I have promises to keep,

And miles to go before I sleep,

And miles to go before I sleep.”

The sources of the poem’s appeal are not far to seek. It has the clearest poetic diction to use; it has a manageable shape and length. The experience conveyed herein is not unusual or queer. The result is the immediate and clear impression upon the reader. It has also rich symbolic connotations. It has the natural scenery and the dramatic utterance of a person who is thrilled at a lovely sight of the woods. It has the modern temper of living in ‘duality’, which comes to us as the different attitudes of the speaker and the little horse towards the lovely woods.

Thus, beneath the apparently untroubled, smooth-running surface of the poem, it conveys an inner meaning as well. ‘Promises’, ‘miles’ and ‘sleep’ symbolically mean that the driver consents to move on, to forgo entering a world of his own, because he has promises and responsibilities to fulfill to mankind during the years before his death. Interpreted figuratively, the lines of the last stanza of the poem (wherefrom the title has been borrowed) reconcile the conflict within the driver. This conflict is a condition which propels most, though not all, human beings; and for this reason we may say that Frost’s poem has a universal value or universality.

In the last stanza of the poem, as has been suggested by J. McBride Dabbs,

“We hear the more than human music of a typical human situation, the instant whisper of death at the heart of life. For we are all travelers, travelling along through haunted country. Strange voices lure us away to nature, friendly voices call us back to men. Whichever call we heed, we sleep at last. And often today, in tragic indecision confused by the conflicting voices, we fall asleep murmuring of the miles we have to go.”

The thing or quality that adds to the charm and appeal of the lyric is its short, memorable length. It has four quatrains of even length and coachy music. For a better understanding of the reader and to enable him to appreciate it for himself, the entire poem is given below:

“Whose woods these are I think I know

His house is in the village though;

He will not see me stopping here

To watch his woods fill up with snow.

My little horse must think it queer

To stop without a farmhouse near

Between the woods and frozen lake

The darkest evening of the year

He gives his harness bells a shake

To ask if there is some mistake

The only other sound’s the sweep

Of easy wind and downy flake.

The woods are lovely, dark and deep.

But I have promises to keep

And miles to go before I sleep

And miles to go before I sleep.”

Within a compass of sixteen lines, the poet has successfully created a lovely scene, an incident and a character. In the beginning, there is only one character who says, “Whose woods these are I think I know”. And then a reference is made to a second person-“His house is in the village though.” The second stanza (also the third one) introduces a third character, for it contributes to the dramatic tension of the speech:

“He gives his harness bells a shake

To ask if there is some mistake.”

By shaking the “harness bells”, the horse puts a question to the driver and wants an answer-“To ask if there is some mistake.”

Stopping by Woods on a Snowy Evening Rhyme Scheme

The lyric is written in iambic tetrameter quatrains. It employs a distinctive rhyme-scheme. Instead of making two lines rhyme in the stanza, the poet has rendered three lines rhyming together. Only the third line stands apart from others in the first three stanzas, in the fourth, the rhyming scheme is the same as in other lines of the stanza.