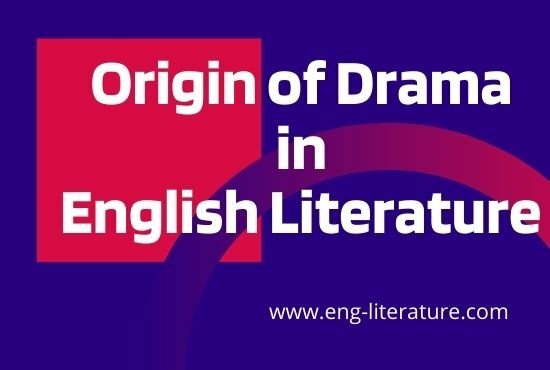 The origins of drama have always been deeply rooted in the religious instincts of mankind. Greek drama had arisen out of the rituals observed in connection with the worship of Dionysius, the god of fertility. In England too drama was an offshoot of the liturgy but it must be noted that there was no connection at all between the ancient classical drama of Greece and Rome and drama in medieval Europe or England.

Elementary mimetic action could be found at the popular mummings at great festivals, morris dancing and simple dramatization of events from the life of Robin Hood or Saint George, performances of wandering tumblers, jongleurs and acrobats containing impersonation and imitation.

In the Middle Ages the Church was the dominant institution in English society. It was eager to provide both for the people’s delight and their spiritual uplift. The Church brought before the congregation salient facts of the testaments. It was from the ‘antiphon’ which contained rudimentary dialogue that the actual evolution of liturgical drama began. Words were invented to fit the church music. Thus around 1000 A.D. the ‘tropes’ came into being. They permitted an extension in music and language of the church ceremonies.

Out of these tropes arose the Miracle Play. The first of these was the Easter Play or the Quem Quaeritis which represented the empty tomb of Christ with dialogue between the priest personating the angel guarding the tomb of Christ, and three others personating the three Maries who come in as if seeking something. Here was present the embryo of drama with all the essentials – setting, the presentation of fictional persons and the use of dialogue.

Gradually there took place growth in different directions. The time taken by the speeches was lengthened. The three Maries were split into individuals with separate speeches. Various subsidiary episodes were added, for instance, there was introduced the episode of the Maries buying spices for anointing Jeans. Attempts were also made at introducing scenery.

Four types of plays now evolved: (1) Peregrinus, (2) Ascen (3) Pentecost and (4) Passion plays which treated various scenes the Bible and life of Christ and Mary. Other tropes started developing such as the Nativity and Epiphany in which the Magi, the shepherds and the angel appeared. In the Prophet’s Play the prophets appeared and prophesied the birth of Christ.

From the 11th century the performances became even more elaborate, the vernacular crept into the dialogue, minor clerics and laymen were introduced as actors. Medieval people had very little entertainment and they flocked to see these liturgical performances.

The church could not accommodate them and by the twelfth century the plays moved into the open. Organization also began to pass from ecclesiastical to lay hands. Being performed outside, these plays began to lose connection with liturgical services. Ultimately vernacular became the usual medium, and only the most sacred parts were in Latin. Thus secularization of the plays took place and in an edict of 1210 the clergy was forbidden to take part in the plays.

Immediately the laity seized upon the drama and expanded the plays both in form and content. The term Mystery play was commonly applied to scriptural stories while Miracle plays dealt with incidents in the lives of Saints and Martyrs. Control of the plays passed on from the clergy to social guilds and then to the trade guilds. Each guild would take on a different cycle suited to its own interest. Thus mariners took the Flood scene.

Growing popularity of the plays and elaborate presentation now led to the evolution of the ambulatory cycle where each episode would be performed on a double-decked cart or pageant. These carts or wagons performed at several appointed places in the town, (twelve spots in York). One wagon performed one scene and moved the next spot while the next wagon came up with the following scene.

These plays were also known as Corpus Christi plays because summer festivals were more suitable for such elaborate outdoor presentations. The Corpus Christi feast was held in May or June when hours of daylight were long. Spectators would throng in from neighbouring villages, and Corpus Christi day became a great public holiday. Realizing these plays to be effective Christian propaganda the Medieval church gave its blessings to the Cycle plays throughout the Middle Ages.

Each town or city had its own cycle. Four of these have been preserved – those of (i) Chester (ii) York (iii) Wakefield and (iv) Coventry. Besides these, there are two separate plays, from the Coventry cycle, two plays of Abraham and Isaac, a group of three plays known as the Digby plays and the Shrewsbury fragments.

1. Chester Cycle: These are the oldest (1350-1450) and consist of 24 plays of which one is lost. They deal with the main facts of the scheme of salvation – Incarnation, Crucifixion and Resurrection and are mainly written in eight-line stanzas.

2. York Cycle: This had 48 episodes written in three distinct stages. They follow the Biblical narration very closely though with occasional introduction of Apocryphal legends. The individual episodes have a subtle appeal and devoutness of tone.

3. Wakefield Cycle: This had 32 plays out of which six are common with the York Cycle. They are also called the ‘Towneley’ plays as the only manuscript in which they exist was in the possession of the Towneley family for a very long time. The Wakefield master is remarkable for his pungent humour and realism as in Noah’s plays and the two Shepherds’ plays.

4. Coventry or Ludus Coventriac Cycle: This had 42 plays long theological passages. These were acted on fixed stages. In these plays three standard bearers recited the prologue and acted announcers.

The basic themes of the Cycles were supplied by Biblical episodes but though the audience was devout, the plays unconsciously sought for ways of escape from piety in all manner of license. Humour was used to represent evil and the ‘fallen state of man.’ It was only in the comic parts that the authors had full independence. Herod, Pilate Pharaoh etc. were developed as popular comic figures.

When these pageants came to an end in the reign of Elizabeth I, it was not because they had lost their popularity but because they were suppressed by Reformist zeal reinforced by State authority to their alleged idolatry and superstition.

From the Mystery and Miracle plays it was but one step to the Morality plays, though Mysteries and Miracles continued to be performed well into the 16th century. Even in the Mystery plays occasionally such abstractions as Dolor or Misery intruded, and the Morality merely extended this principle to all characters. The conflict in the psyche of man between the two antinomies – good and evil – was externalized and projected on stage. It was thus essentially a non-naturalistic mode.

The themes were frankly didactic and not taken from any Biblical source. Common characters in Morality plays were Good Deeds the Good and Bad Angel, Justice, Gluttony Vice, Death, Old Age etc. Vice was a popular comic character whose primary duty was to tease the devil.  Some of the well-known Morality plays are The Castle Perseverance, Mankind, Wisdom and Nature, Everyman etc. The hero is usually a personification of humanity. He is called Everyman or Humanum Genus or Mankind and the dramatic action consists in his attempted corruption by vices and the final salvation by virtue. Every member of the audience was expected to suffer with the hero and rejoice in his salvation.

1. The Morality with its artificial manner of presentation was not really a throwback in the dramatic tradition. The Mystery and the Miracle plays had characters with individual names and though primitive in execution, it was a drama rooted in reality. However, by moving into a world of allegory, the Morality playwright paradoxically came closer to the world around them; giving to the characters contemporary features.

2. The spiritual struggle of the hero later became a marked characteristic of Elizabethan tragedy. Faustus is often called an Elizabethan Morality

3. The Moralities are better constructed and have a better unity of form than the Mystery and Miracle plays. Thus they definitely mark a step forward in the development of drama.

They were so called as they were performed between the courses of a feast in the houses of gentry or between the acts of a longer play: They flourished around the middle of the 16th century. They were necessarily very short plays, characters included commoners like Citizens and friars, there were set scenes, coarse farcical humour and no allegorical figures.

Sir John Heywood’s The Four P’s is one of the best known interludes. It is about a lying match between a Palmer, a Pardoner, a Pedler and a Pothecary, Johan Johan the Husband, Tyb his wife and Sir John the Priest is another notable play by Heywood, full of witty sayings.

1. They were more popular than the Moralities.

2. The authors of the Interludes made use of native dramatic material and paved the way for Elizabethan comedy.

No doubt, these English dramas at the introductory stage gets a good stride afterward and developed through Renaissance Plays, Restoration Comedy, modern drama and the dramas of the present time. But the essence is fully untilled by University Wits and William Shakespeare in the Elizabethan England.

What is the first tragedy in English literature?

The first tragedy written in English literature is Gorboduc (1561) written by Thomas Sackville and Thomas Norton.

What is the first comedy in English literature?