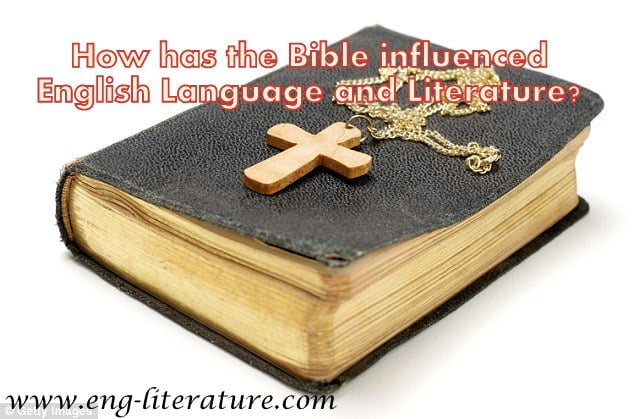 The Bible being the Holy Words of God is the sacred book of the Christians. The literary influence of the Bible has been tremendous, all pervasive and perennial. In fact the Bible has been providing the English men of letters spiritual themes and also modulated their literary style. It has gifted ample vocabulary, most beautiful quotations, maxims and phrases. The whole range of English language and literature is much indebted to the Bible for its dignity and richness.

Bible is divided into two parts:

It was St. Jerome who made the first translation of Bible in the 4th century A.D. This was in Latin and called ‘vulgate’. During the O.E. Period Bede had translated a portion of the gospel of St John. Wycliffe (1320-84) took a great initiative in completing two versions of Bible. William Tyndale, the Reformation leader made a wholesome attempt at this task and translated directly from the Hebrew and Greek originals and not from the Latin ‘vulgate’. Subsequently Miles Coverdale brought a complete English Bible which was printed in 1535. After Tyndale, attempts were made at numerous translations, the chief of them being Cranmer’s Great Bible (1539), the Geneva Bible (1556), and the Bishop’s Bible (1568).

Comparison between Old Testament Vs New Testament of Bible.

The greatest and the most popular version of the Bible is King James I’s Authorised Version of Bible (1611), a works of 47 recognised biblical scholars for four years. They compiled the Hebrew, the Greeks, the Latin vulgate and many other translations into a new excellence. Its sweet fragrance pervades almost the entire arena of English language and literature. As Moody and Lovett put it

“In the King’s Bible we possess monument of English prose of no particular age, but gathering into itself the strength and sweetness of all ages.”

“The influence of Bible is two folds – there is the rhetorical influence of the Old Testament and the convention of the new. It has both the thematic and stylistic influence.”

The Bible carried new coined expressions to all the strata of society: ‘tender mercy’, ‘loving kindness’, ‘peace maker’, ‘glad tidings’, ‘scape goat’ and so on. Many Biblical phrases are now used as idioms, ‘to hope against hope’, ‘olive branches’, ‘to cast pearl before swine’, ‘the eleventh hour’, ‘wash one’s hands of’, ‘to kill the flatted calf’, ‘a howling wilderness’, ‘a broken reed’, ‘a good Samaritan’, ‘swear of the brow’, and so on.

The influence of the Bible spreads all over English literature, particularly the thought and style of great English prose writers. This Holy book ignited Bunyan a lot to pen down his magnum opus, Pilgrim’s Progress. The historian Clarendon and Fuller, catch some measure of the stately rhetoric of the Old Testament. While Sir Thomas Browne in his quaint Religio Medici, Robert Burton in his Anatomy of Melancholy and Jeremy Taylor in a varying ways testify to its influence.

In the world of English poetry Milton, Wordsworth, Coleridge, Keats, Shelley, Pope, Dryden, Tennyson, Browning were highly charged up with the light of the Bible.

English drama has also been influenced by the Bible. In fact it was in the middle of the Church that English drama born and brought up. Previously Miracle and Morality plays of the Middle Ages originated from Bible. Playwrights like Marlowe, Shakespeare, T.S. Eliot, G.B. Shaw owed much to Bible.

Among other writers Cromwell, Wesley, Richards, George Fox, Emerson, Walt Whitman, Abraham Lincoln, and also Mahatma Gandhi were under the influence of it that changed their outlook and sharpened their imagination.

Let’s sum up in the voice of George Sampson,

“The greatest of all translation is Bible. It is even more than that: it is the greatest English book, the first in the English classic…. It is in a singular degree the voice of people.”

Please don’t forget to put your view about this article in the comment box.