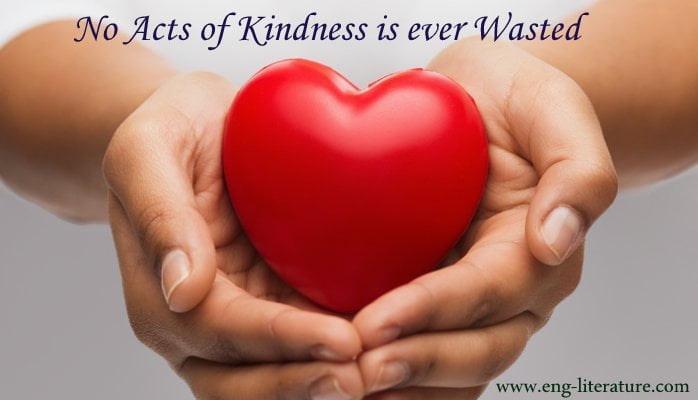 Following
is a true story of Dr. Howard Kelly, a distinguished physician who, in 1895,
founded the Johns Hopkins Division of Gynecologic Oncology at Johns Hopkins
University. There is still some doubt about the wholesome truth about
this story. May be some part is real while some part is fictionalised. But keeping
all those debates away we must readily admit the most precious lesson that this
story passes to us.
There
was a poor boy named Howard Kelly. He used to sell goods from house to house
only just to earn a living and pay his education.  One day he felt so hungry and decided to ask
for something to eat at the next house he is set to visit. However, he lost his
guts to ask for a meal when a beautiful young woman opened the door for him.
Instead
of asking for a meal, he just asked for one glass of water. But the young lady
noticed that he looked hungry. So instead of water she brought him one large
glass of milk.
He
slowly drank the milk and asked “How much do I need to pay”?
The
lady replied, “You don’t have to pay me anything as mother taught us to never
take any pay for kindness.”
The
boy said smilingly, “Then I thank you from my heart.”
As
Howard Kelly left that house, he not only felt stronger physically, but his
faith in God and man was strong also. However, that little act of kindness made
a mark on his heart and made him feel stronger and better. He was ready to give
up in his life before that happened but because someone had showed him kindness
in a much unexpected event.
Years
had pass and the young woman became seriously ill. The local doctors were kind
of baffled of her case so they sent her to the hospital in the big city. A
specialist is needed to study her rare illness so they consulted Dr. Howard
Kelly. He is a renowned Gynecologist who founded the Gynecologic Oncology
division at Johns Hopkins University.
When
Dr. Kelly heard the name of the town where the patient came from, an
inexplicable light filled his eyes. He immediately went to see the patient and
recognized her at one glance. Determined to save her, he went back to the
consultation room and did his best to save the life of a woman who once made a
difference in his life. After a long battle, he finally won.
Dr.
Kelly requested the hospital accounts to forward the final bill to him for
approval. He looked at it and without any hesitation wrote something on the
bill and had it sent to the woman’s room. The woman got the bill and was afraid
to open it for she was so sure that the cost is high and would probably take
all her life to pay for it. But when she finally opened it, something caught
her eye. At the corner of the bill were words she hardly believe her eyes. It
is written:
“Paid
in full with one glass of milk”.
Signed
by Dr, Kelly
Tears of joy flooded her eyes as her happy heart prayed: “Thank
You, God, that Your love has spread abroad through human hearts and hands.”
Moral: Three things in
human life are important: the first is to be kind; the second is to be kind;
and the third is to be kind. No act of kindness is ever wasted. Begin it today,
treat everyone you meet as if they were going to be dead by night. Extend to
them all the care, kindness and understanding you can muster and do it with no
thought of any reward. Your life will never be the same again.
Now you have two choices. You can share this post on and spread
a positive message or ignore it and pretend it never touched your heart.
~~~~~*~~~~~