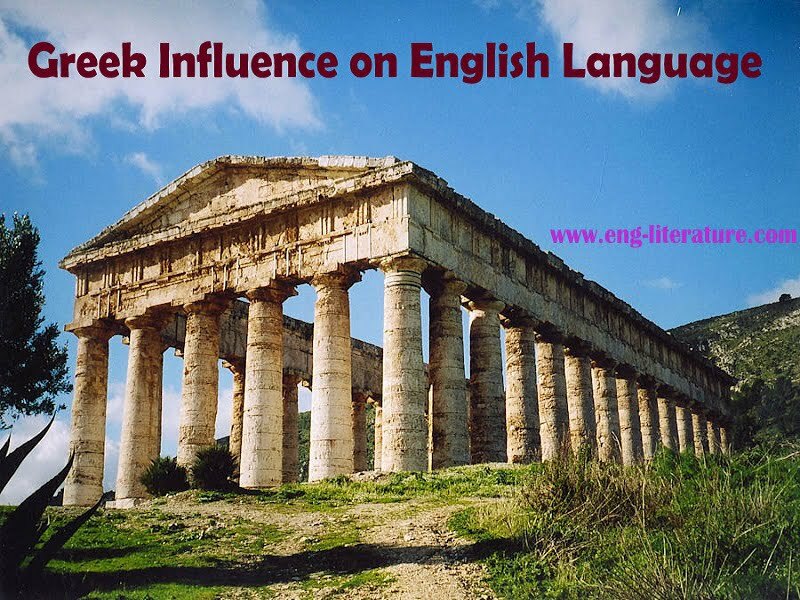 The revival of Greek learning in Western Europe at the beginning of 16th century opened up a new vista (i.e. Greek) from which the English vocabulary was greatly enriched. But the pre-Renaissance period was not altogether blank of Greek borrowings. Further in the hands of able writers and thinkers like Socrates, Plato, Aristotle, Homer, Aeschylus, Euripides, Sophocles, the potentialities of this language for expressing accurate distinction have been cultivated to the highest point.

According to Margaret Schlauch “Classical Greek made a special contribution to English in connection with the study of grammar and rhetoric.” The words ‘grammar’ and ‘rhetoric’ derive from Greek language. Other significant words in this class are ‘parenthesis’, ‘anaphora’, ‘irony’, ‘climax’, ‘bathos’, ‘elegy’, ‘antithesis’, ‘oxymoron’, ‘protagonist’ etc.

Sometimes hybrids have been made by adding Greek suffixes and prefixes to English words. Thus the Greek prefixes ‘anti-‘ (antisocial), ‘hyper-‘ (hyper-sensitivity) ‘infra-‘ (infrared), ‘a-‘ (amoral) have been joined to many English words. The Greek suffix ‘-ology’ has been added to words of Latin English origin as in ‘sociology’.

Finally, Greek like Latin and Sanskrit, is beyond doubt, a dead language, but it is still effective through English and other European tongues. It has a wonderful capacity of being precise and thus feeding the needs of modern science and technology. Mario Pei in his work Language for Everybody commented

“The civilization of the Greeks and Romans forms the basis of our western culture.”