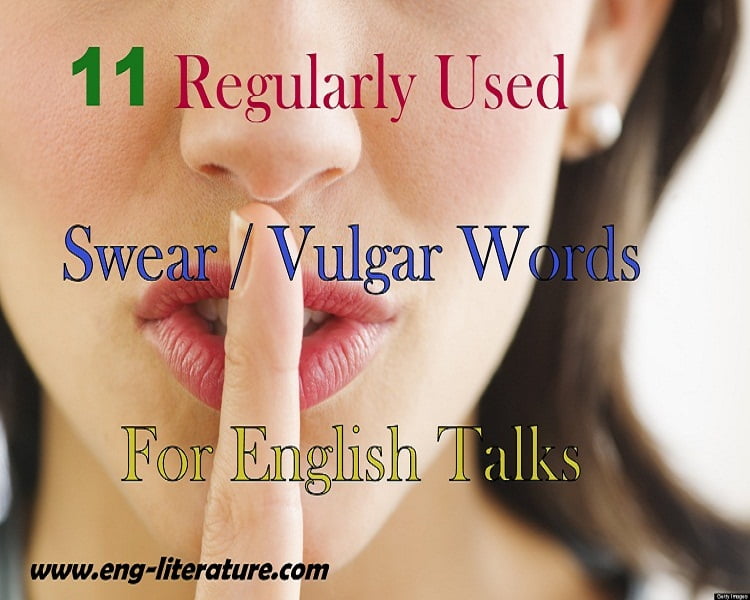 What is Swear Word?

Swear words are offensive words used especially to express strong emotional outburst. Swear words, love them or hate them, are an integral part of a language. To master fluency, you must master swear words.

But why do people use them? What’s the point?

When you use swear words, they allow you to convey emotion that would otherwise not be as easy to communicate. Swear words increase your vocabulary and give you a wider range of emotions to invoke than if you didn’t use any.

Some swear words are extremely versatile and can be used in many different ways. When you begin to overcome your negative gut-reaction, you may start to see the beauty in all of these amazing swear words.

Of course, it’s important not to overuse swear words, just like you wouldn’t want to overuse any word. However, because some swear words are so interchangeable, it can become easy to just rely on a few swear words as the majority of your vocabulary.

The most important lesson to take home from swear words is to just notice how they make you react and ask yourself why these feelings arise inside you.

Below is a list of the 11 most common swear words in English with the many different ways in which they are used.

It’s important that when you practice swear words that you do it with close friends who can help guide you towards the proper time and place to use them. But when in doubt, use them with people who are near your age.

A light swear word, can be said on TV and radio. Damn means to condemn (a person) to suffer eternal punishment in hell, but is more commonly used when expressing surprise or disgust.

Damn You: To express that you are upset with another person.

“Daaaam”: Expression of awe or wonder.

Damn: Expression of dismay or disappointment.

To Give a Damn: To express how little you care.

Damn (Adj): To add a feeling of stigma/negativity to a noun.

Another light swear word, can be said on TV. Hell is a spiritual realm of evil and suffering, often described as a place of perpetual fire beneath the earth where the evil people go to be punished after death.

When Hell Freezes Over: To express how unlikely it is for an event to occur.

Go to Hell: Expression of anger.

To Hell with it: It’s not important.

Ass can be said on TV, but asshole cannot. Ass is another word for buttocks or anus, but is commonly used to describe someone who’s rude or mean. Can also be used to refer to a donkey or mule (burro) in a non-vulgar way.

Make an Ass: To make oneself look foolish.

Asshole: A stupid, mean, or despicable person (usually a guy)

Badass (1): A person who shows supreme confidence, nearly divine ability, and a frequent disregard for authority.

Kiss my Ass: A sarcastic insult to anyone who wants something from you.

Ass (Adj): Is also used as an adjective amplifier:

Piss is a vulgar term for pee or urine.

Pissed: Another word for drunk (used in British English, not American).

Piss Off: To express you want to be left alone.

Piss Down Rain: To show how hard it’s raining.

Bitch can mean someone who whines and complains a lot or someone who’s angry (usually in regards to a woman).

To Bitch: To whine or complain.

My/ Your/ His Bitch = Servant

Bitch Out: To yell and criticize.

Something is a Bitch: to be Difficult

Bitch Please: As a response to a stupid comment.

To Ride Bitch: The middle seat in a car.

Bitch Slap: To slap someone with the back of your hand.

Cock can also mean a male chicken (rooster), though it it’s not as common to use it this way. The most common use of cock for rooster is where two roosters fight each other, called cock fights.

Dick can be used to mean penis too, but it’s also short for the name Richard. I have no idea how they got that..

Cock Block: To deny someone an opportunity to hook up with a girl.

Dick: A mean or selfish person.

A vulgar word for fecal matter.

To be Shit: Can mean both horrible or great.

Up Shit Creek: To be in an extremely bad situation.

Shit-Faced: To be extremely drunk

Eat Shit: An insulting way to say no.

Shit out of Luck: To have no luck what-so-ever.

Dumb Shit/ Shit for Brains: Someone who’s not very smart.

Get Your Shit Together: Calm down, rise above your problems.

This Shit: Used in place of stuff / thing(s).

Shoot the Shit: Small talk / not talking about anything important.

To Be in Deep Shit: Big trouble.

Know Your Shit: To be very smart.

A Shit Ton (of Something): To emphasize ton (do a lot of something)

Vulgar words for vagina. Cunt is a derogatory term for a woman, considered by many Americans to be the most offensive word in the English language—not the case for Australians, they frequently use the term. Pussy can also be used when talking about a “pussy cat.”

Pussy: “What a pussy.” – means you are afraid, “what a chicken” has the same meaning without being vulgar.

Cunt: a stupid, incompetent person. “Shut up, you cunt.”

Fuck is one of the most interesting a malleable words that there is. It can be used to describe almost anything.

The Word Fuck that will tell you all you need to know about the word fuck. Below there is a semi-transcript of what is said in the video.

Fuck is often used to add emphasis and is the only word that can be an adjective, adverb, adverb enhancing an adjective, a noun, as part of a word, and almost every word in a sentence.

Fuck can be used to describe pain, pleasure, hate, or love.

Adjective: “Why am I doing all the fucking work?”
Adverb: “That girl talks too fucking much.”
Adverb enhancing adjective: “Those Real Life parties are fucking awesome.
Noun: “I don’t give a fuck.” (I don’t care at all)
As part of a word: “Abso-fucking-lutely.” or “In-fucking-credible.

And, as almost every word in a sentence, “Fuck the fucking fuckers.”

It can be used to describe…

That Bloody frickin’ artic blast pissed me the Fuck Off!!!

Its so bloody cold out side.
That Bloody Avik, always getting in the way.

I’m sick of my bloody boss yelling at me for no apparent reason! I’m running bloody late! Oh you can go to bloody hell!

You’re such a wanker.
Oh gosh! How did you know?

Swear words can be fun, and funny, when used in the right context. Just be sensitive to the people around you when you say these words. And remember to practice with your friends to find out exactly how to use the different words.