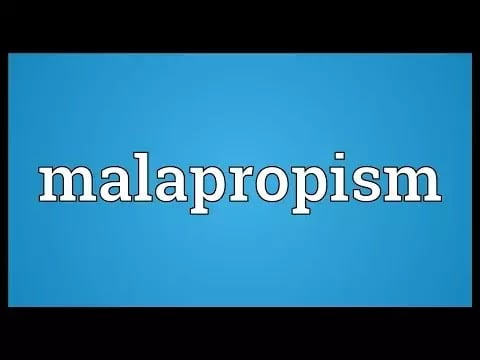 ‘Mal’ is originally a French prefix which means ‘ill’ and ‘aprop’ means ‘to the purpose’. Malapropism is the wrong use of similar sounding word that results in a nonsensical and humorous expression.

Mrs. Malaprop is  a character in Richard Brinsley Sheridan’s famous play, The Rivals.  She is famous for her notorious use of words or phrases which gives her a special status representing a new form of entertaining verbal felicity. The oddity of Mrs. Malaprop’s language is popularly known as Malapropism which has become a subject of discussion in English philology.

Malapropism is a common phenomenon in our daily life.

1) You lead the way and we’ll precede. (proceed)

2) Having one wife is called monotony. (monogamy)

3) Good punctuation means not to be late. (punctuality)

William Shakespeare uses malapropism in his plays as well. Look at the following example of malapropism uttered by Constable Dogberry in Act III Scene 5 of “Much Ado About Nothing”:

Here the use of ‘comprehended’ for ‘apprehended’ and ‘auspicious’ for ‘suspicious.’

The Effect of Malapropism

Malapropism is the direct influence of the Latin and Greek words after Renaissance. The half educated people were tempted to use such way which laid to ridiculous mistakes.

The effect of Malapropism as Sheridan employed is to raise the feeling of ludicrousness. It also acts the farcical element in rhetoric. Although it is considered an error in speech, malapropism is a great source of humour in both everyday life as well as literature.